The riding of Waterloo will be contested for the first time next year, created out of the former Kitchener-Waterloo riding currently represented by Conservative MP Peter Braid. The riding has an interesting history, and was once the seat of a future prime minister. The riding also has deep German roots, going back to the days when Kitchener was known as Berlin.

This is the second riding whose history I am profiling as part of the 2013 Kickstarter campaign. This riding was requested by backer Anthony Piscitelli, who generously contributed to the project that led to Tapping into the Pulse: Political public opinion polling in Canada, 2013. The ebook can be ordered here, or directly from Gumroad here, Amazon for your Kindle here, or from Kobo here.

In the first three elections from 1867 to 1874, Isaac Erb Bowman, a Liberal, won the riding by acclamation. Born in Woolwich as Isaac Erb Baumann, the Waterloo North MP was formerly a businessman and teacher and member of the legislature before Confederation. The son of Pennsylvanian Germans, Bowman was a proponent of confederation in the context of dominance from the United States. In 1865, he made a speech in the legislature concerning confederation, and the fears of eventual separation from Great Britain entirely, that would prove prescient:

"Assuming that we are laying the foundation of a British North American Empire, which is destined to become independent of the Mother Country, after our resources may become sufficiently developed, and our vast territory has been filled up with an industrious, intelligent, and thrifty population, I do not think such anticipation should induce us to vote against it."

Bowman did not run for re-election in 1896, and died a year later. The obituary in the Berliner Journal read that "with firm decisiveness in political matters, [Bowman] combined proper treatment of his opponents in elections, along with modest simple, friendly behaviour in person relations, and was, consequently, loved and respected by all classes."

In 1896, Conservative Joseph Seagram won the riding. A breeder and distiller and former councilor for Waterloo, Seagram was well-known in the horse racing community and would be an inaugural inductee into the Canadian Horse Racing Hall of Fame in 1976. The founder of Seagram's, a maker of whiskey and other beverages that was sold off in 2000, Seagram's horses won 15 Queen's Plates. He was acclaimed in 1900, and won again in 1904. He did not run for re-election in 1908.

That year, the riding was won by William Lyon Mackenzie King. The future leader of the Liberals from 1919 to 1948, King would be prime minister from 1921 to 1926, again from 1926 to 1930, and yet again from 1935 to 1948. But as the MP for Waterloo North, King was named Minister of Labour and was acclaimed in a by-election following that appointment, as was the convention at the time.

King would not call Waterloo North home for very long, as he was defeated by a margin of 52.2% to 47.8% in the 1911 election that saw Robert Borden's Conservatives come to power. King would later represent ridings in Prince Edward Island, elsewhere in Ontario, and in Saskatchewan.

William Weichel defeated King in 1911. A merchant, he would later be the MPP for Waterloo North and mayor of Waterloo.

But Weichel would prove to be but a brief interlude in a long period of Liberal reign. Undoubtedly as a result of the First World War, the heavily German riding of Waterloo North swung to the Liberals in 1917 by a large margin. William Daum Euler, who would be re-elected seven times and be Waterloo's longest-serving MP, took 59% of the vote in the 1917 election. 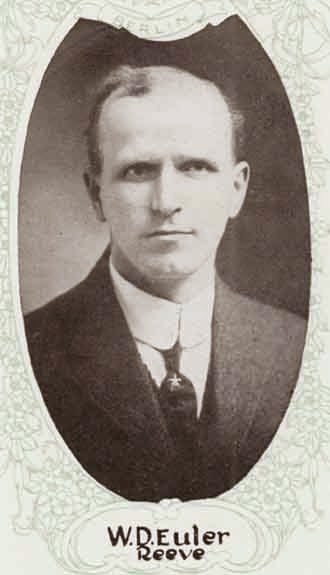 Mayor of Berlin from 1913 to 1914, Euler had spoken out against anti-German sentiment at the outbreak of the war. That sentiment was so strong, of course, that Berlin would change its name after Lord Kitchener, who was then the Secretary of State for War in the British government.

Euler was re-elected in 1921 with a smaller margin, and again in 1925 and 1926. He was then appointed Minister of Customs and Excise, and would later become the Minister of National Revenue in 1927. In 1930, Euler won by his closest margin (57% to 43%) against Karl Homuth, who would have more success as the MP for Waterloo South over four terms. After winning by the largest margin he would manage in 1935 (63% to 20% for the Conservatives and 16% for the new CCF), Euler was named Minister of Trade and Commerce in 1935.

After winning again in 1940, just in time for his second war as an MP for Waterloo North, Euler was appointed to the Senate by Prime Minister King. He would sit there until 1961. In total, Euler would serve for 43 years in the House of Commons and Senate.

Manufacturer and former mayor of Kitchener, Louis Breithaupt, replaced Euler as the Liberal MP for the riding, winning a by-election in 1940 handily. He would be re-elected again in 1945 and 1949 (when the CCF hit its highest level of support in Waterloo North at 22%), before being appointed to be Lieutenant-Governor of Ontario.

In the by-election of 1952 to replace him, Liberal Norman Schneider prevailed with 44% of the vote against 39% for the PC candidate. She was Elizabeth Janzen, a secretary and the first female candidate to run in the riding. Schneider was a business executive, industrialist, and manager, and served in the 118th Battalion during World War I. Schneider would be re-elected in 1953 and 1957.

He was defeated in 1958, however, as the PCs took back the riding for the first time in 41 years in grand style, winning 55% of the vote against 34% for Schneider. It would be, until 1984, the best performance of the party in the riding's history. O.W. Mike Weichel, another veteran of the First World War, would be re-elected in 1962 and 1963. In the 1962 election, the New Democrats had their first run at the riding, capturing 16% of the vote.

Weichel did not seek re-election in 1965 and Keith Hymmen took it back for the Liberals with 46% of the vote. Hymmen, a chemical engineer and former mayor of Kitchener, would transfer over to the riding of Kitchener when the boundaries were changed for the 1968 election.

At that time, Waterloo North became Waterloo. Max Saltsman, formerly the NDP MP for Waterloo South since 1964, transferred over to Waterloo. It had become a better riding for the NDP, and Saltsman won it in 1968 by the closest of margins. The former alderman for Galt, who served in France, the Netherlands, and Germany with the Royal Canadian Air Force in World War II, took 34% of the vote. The Liberals took 33.1% and the PCs 32.5% - a razor-thin three-way race.

Saltsman won with a more comfortable margin in 1972 and again in 1974, when Waterloo briefly became Waterloo-Cambridge. In 1979, Saltsman did not run again and the boundaries were changed, the riding reverting to Waterloo. With Saltsman gone and the boundaries shifted, the NDP fell to 18% and the PCs took it. Walter McLean, a Waterloo alderman and former chaplain with the RCAF's 404 Wing, McLean would be re-elected by a slim margin in 1980 and more comfortably during the Brian Mulroney years in 1984 and 1988. He served as Secretary of State from 1984 to 1985, and Minister of State (Immigration) until 1986.

McLean did not run in the 1993 election and the Liberals stormed back with 48% of the vote, their best performance in 40 years. Andrew Telegdi took the riding, as a Reform Party candidate finished seond with 26%, just edging out the PCs with 24%. The NDP sunk to its lowest level of support at just 4.5% of the vote.

In 2008, however, Telegdi was defeated by a margin of just 27 votes. With 36.1% of the vote to 36% for Telegdi, Peter Braid had just squeaked by. The Greens put up their best performance in the riding in their history, with 12%, coming not too far behind the NDP's 15%.

Braid's margin widened somewhat in 2011 (41% to 38%), and the MP has been Parliamentary Secretary for Infrastructure and Communities since 2013.

The riding has moved away from its German roots (Waterloo North had only two MPs who were not of obvious German descent - King and Seagram) but is still quite Liberal. The riding has been won 22 times by the Liberals in contested elections, and the party has averaged 46.8% support since 1867. That compares to 14 wins and 39% for the Conservatives and their predecessor parties. Kitchener-Waterloo was one of the better ridings for the Liberals in the disastrous 2011 campaign. Though it was, elsewhere, the worst election for the Liberal Party in its history, the 2011 result in Kitchener-Waterloo was better than its performances in the 1970s and 1980s, and was actually even an improvement over 2008.

Waterloo began its history as a Liberal riding, briefly flirted with the Conservatives at the turn of the century, and stuck with the Liberals for decades after the First World War. It was 40 years after the end of that conflict before the Conservatives were able to win again. But after the re-drawing of the boundaries in the 1960s, the riding went with the NDP or the PCs for 20 years, never having voted for Pierre Trudeau or John Turner. A safe riding during the Jean Chrétien years, will Waterloo return to the Liberal fold in 2015?
Posted by Éric at 2:12:00 PM