Could Quebec keep the Liberals from a majority?

A new poll from EKOS Research for iPolitics and Radio-Canada suggests that, despite the fallout from the Liberals' decision not to support the government's mission in Iraq, there has been little change in voting intentions nationwide. But the poll also suggests that Quebec could be the obstacle blocking the path to a Liberal majority government. 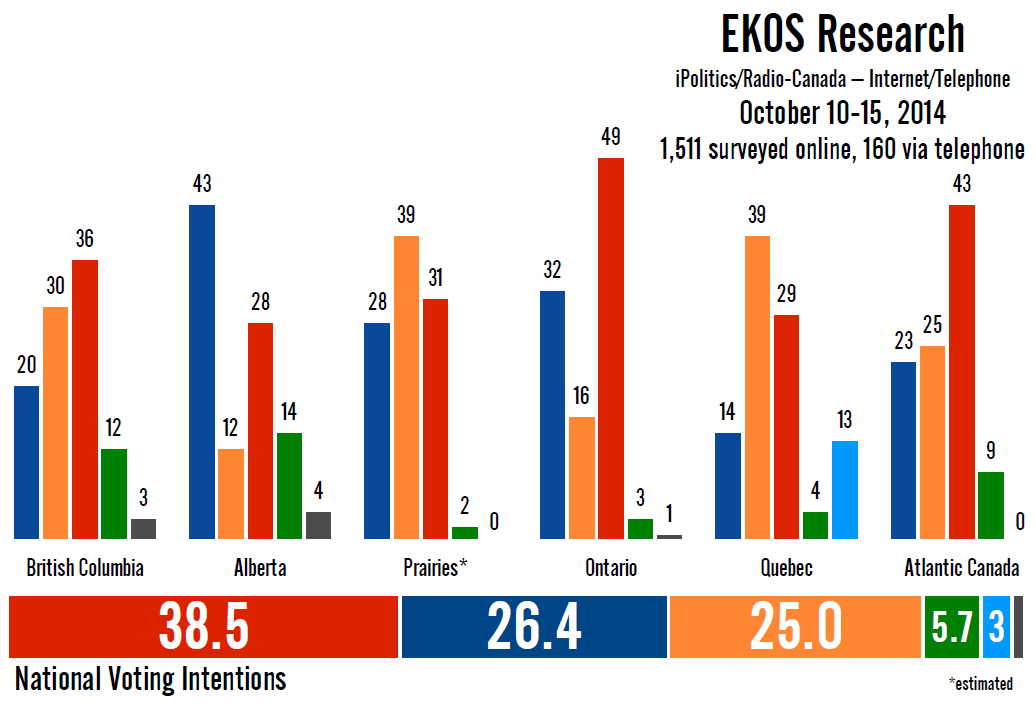 Suffice to say, none of the shifts experienced by the major parties were outside of the margin of error. However, the New Democrats have made gains in three consecutive EKOS polls, worth 3.6 points since the spring.

The New Democrats led in two regions. They were ahead in the Prairies with about 39% (my estimate from EKOS's tiny samples in Saskatchewan and Manitoba), with the Liberals at 31% and the Conservatives at 28%.

The NDP was also in front in Quebec, with 38.8% support to 29% for the Liberals, 14.3% for the Conservatives, and just 12.6% for the Bloc. That was a drop of almost five points for Mario Beaulieu's party. Beaulieu's approval rating in Quebec was just 11.7%, with his disapproval standing at 47.6%.

Now, these numbers in Quebec are not unusual for EKOS. At the end of September, the NDP had 36% to the Liberals' 32%, while in July the New Democrats had 37% to the Liberals' 29%. Over that time period, other polls have averaged 38% for the Liberals and 27% for the NDP, so in this regard EKOS seems to be out of step with consensus opinion (with the exception of one CROP poll where the gap was two points, the NDP has not led in any of the last 15 polls done by other firms since mid-June).

But polling by CROP and Léger have suggested that the NDP holds the edge among francophones, a finding corroborated by EKOS's latest survey as well. This poses a problem for the Liberals. Though the party is doing respectably well among this demographic, they are at a distinct disadvantage. Francophones decide the results of the vast majority of Quebec's ridings and polls suggest that francophone support for both the NDP and Liberals is generally uniform. That means the Liberals could find themselves losing a large number of seats outside of Montreal by slim margins - but losing nevertheless.

The seat projection using EKOS's numbers shows what kind of role Quebec could end up playing in the next election.

Outside of Quebec, the projection model would give the Liberals 131 of 260 seats - a majority. But in Quebec, with the New Democrats a handful of points below their 2011 result, the Liberals win just 17 seats, with 57 being retained by the NDP. The end result is that the Liberals find themselves 21 seats short of a majority - and it is hard to imagine the Liberals doing much better in the rest of the country than what EKOS awarded them.

Even if we put the gap in Quebec at what the other pollsters think it is, we still get the Liberals falling short of a majority. This suggests that unless the Liberals can make the same kind of breakthrough that the NDP did in the province in 2011, their hopes for a majority government are likely to be dashed.

That will make it difficult for Trudeau to gain ground among francophones, though this weekend's appearance on Tout le monde en parle could help in that regard. But the prospect of forming government may not help him. The NDP led in Quebec in voting intentions, despite just 8% of Quebecers thinking the NDP would form government in 2015. Almost half of Quebecers think the Liberals will win.

For the Conservatives, this poll is a disaster. With under 20% support in B.C., the party takes just three seats there, and ties the Liberals for second in the seat count in the Prairies. With 79 seats (three-quarters of them in Alberta and Ontario), the party would find itself reduced to third-party status, with the NDP remaining as the Official Opposition. How this setup would work in practice is a little difficult to determine.

Of course, the Conservatives have not been as low as 26.4% in other polls, so these results are likely on the lower end of what is plausible. But we can still compare trend lines, and it seems that, so far, the Liberals are holding steady despite what has been widely considered to be a bad couple of weeks for Trudeau. But let's see what others have to say.
Posted by Éric at 10:25:00 AM