How bad are Selinger's polling numbers?

Amid calls for his resignation emanating from within his own cabinet, Greg Selinger is determined to stay on as Premier of Manitoba. The calls come on the heels of poor polling numbers, as NDP MLAs in the province fear for their job security. So just how bad are Selinger's poling numbers?

They aren't great. But they may be getting better. 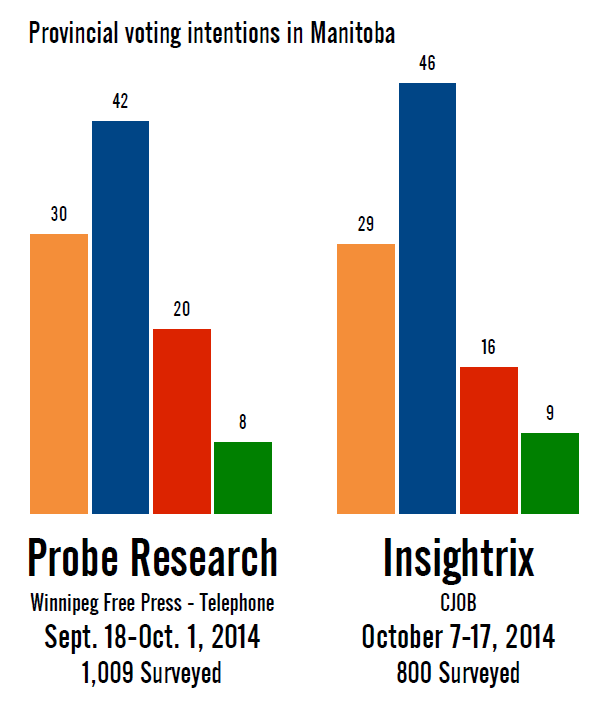 Two polls have been done in the province within the last month, both showing relatively similar results. The older survey, from Winnipeg-based Probe Research, put the Progressive Conservatives under Brian Pallister at 42%, down three points from where the party stood in Probe's June poll. The New Democrats were down two points to 30%, while the Liberals under Rana Bokhari were up four points to 20%. Support for the Greens and other parties was 8%.

Insightrix was in the field more recently, polling between October 7-17. It found the PCs to have the support of 46% of Manitobans, down three points from the polling firm's last survey of January-February. The New Democrats were up five points to 29%, while the Liberals were down two points to 16%.

Certainly, those are poor polling numbers for an incumbent government. After 15 years, voters in the province may be ready to turn the page.

Selinger's decision to increase the PST after pledging not to in the 2011 provincial election has been a major contributing factor to the NDP's slide. The party dropped behind the PCs at the end of 2012, and there has been no looking back.

As you can see in the chart above, this is a stark change in fortunes from where the party had been prior to 2012. The NDP and PCs would routinely trade the lead back and forth, but for the last two years the NDP has fallen well behind.

And it isn't due to a surge in PC support. The Tories have held relatively steady through it all, and have not seen their support move much in either direction for the last four years. Instead, the Liberals have eaten into the NDP's support, moving from the low-teens to around 20%. The Greens have also upticked a little, dragging the New Democrats down into a position where re-election is an unlikely prospect. 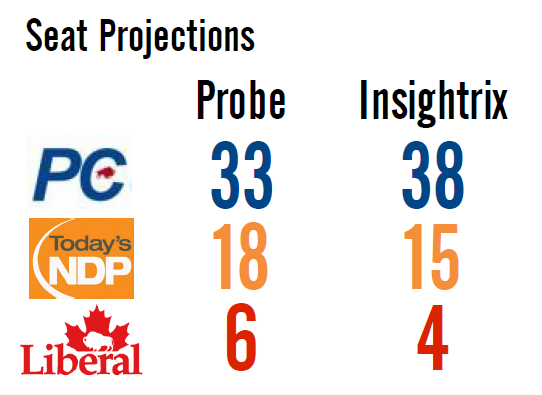 The seat projections for these two polls make for depressing reading for Manitoba New Democrats. With Probe's slightly more positive numbers, Pallister would still win 33 seats and form a majority government, with the NDP at 18 seats and the Liberals with six (the party's best performance since 1990). With the wider gap measured by Insightrix, the Tories would win 38 seats (outpacing their historical best), with the New Democrats at 15 and the Liberals with four. With the high support recorded for the Greens, a seat for them would not be completely out of the question.

Dire straits indeed for the NDP, but the picture might actually be getting rosier. From around December 2013 to February 2014, the party appears to have hit rock bottom. Polling by Probe and Insightrix done during that time gave the NDP an average of just 25% support, against 48.5% for the PCs and 19% for the Liberals. A spread like that would be enough to give the Tories as many as 42 seats, with just nine going to the NDP and six to the Liberals. With a margin like that, a third-place finish for the NDP in the seat count would even be possible.

Today, however, it appears the NDP has rebounded a little, averaging 29.5% across these two polls against 44% for the Tories and 18% for the Liberals. A gain of around five points in 10 months is nothing to sneeze at, but the party has a long way to go before re-election becomes more than just a hope.

Would Selinger's departure help matters? The most recent poll by Angus Reid, conducted at the end of August and in early September, put Selinger's approval rating at just 30%, roughly even with his own party. But that compared favourably to the 26% to 28% approval rating he managed between May 2013 and June 2014.

So the New Democrats in Manitoba may be experiencing a bit of a rebound from the catastrophic numbers of the last year. But the odds are still stacked overwhelmingly against them.
Posted by Éric at 9:39:00 AM