The race for the Toronto mayoralty is finally coming to an end today and the polls are unanimous: John Tory should defeat Doug Ford and Olivia Chow by a comfortable margin. The polls are in remarkably close agreement, showing little variation that cannot be explained by normal sampling error in polls done over the last two weeks. But will voters do what they have said they would?

First, the averages. The weighted averages give Tory 42.8% of the vote, putting him a little more than 10 points ahead of Ford. He has averaged 32.2%, followed by Chow at 22.2%. Support for other candidates has averaged 2.8%.

These numbers have been steady for some time. Since the beginning of September, Tory has averaged no lower than 40.4% and no higher than 46.4%. He has led since the end of July. 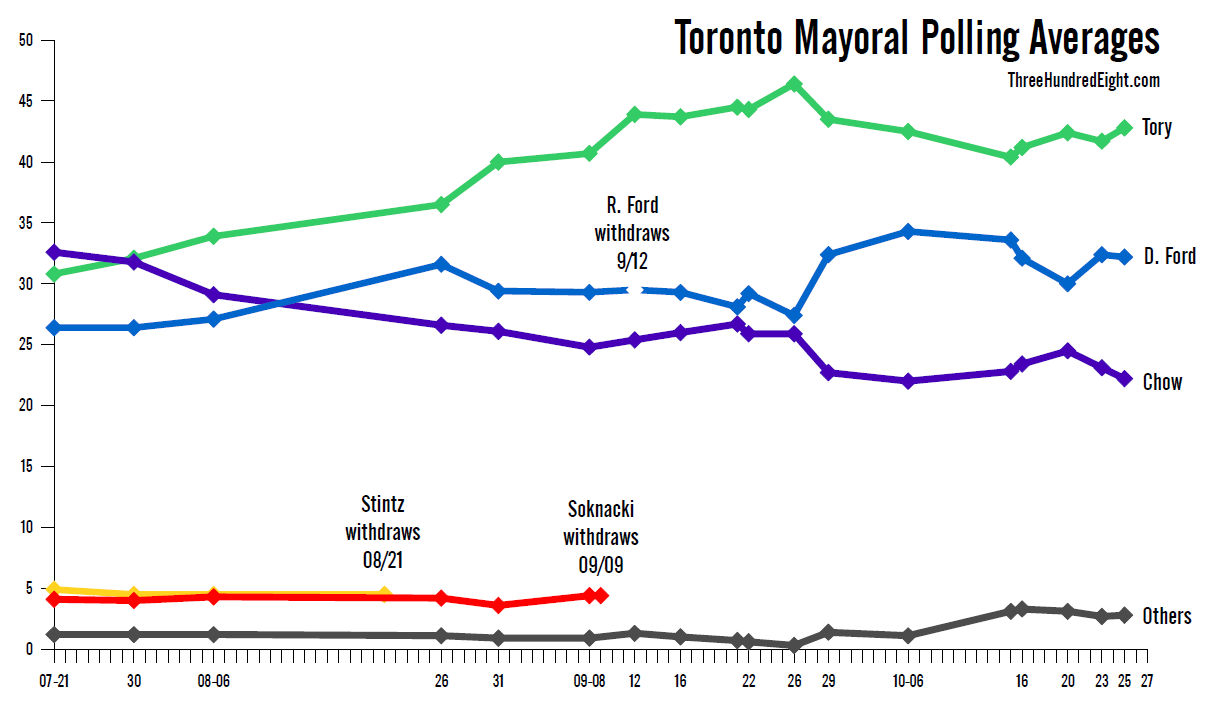 Support for Ford has been steady since the end of September, not wavering from a range of between 30% and 34.3%. That does suggest he ends this campaign with slightly more support than Rob Ford had when he bowed out.

For Chow, she has been stuck since the beginning of August with between 22% and 26.7%. She lost the lead in July and fell to third at the end of the next month. She never recovered.

All of this stability might be showing the effects of a long race. After months and months (and months) of campaigning and debates, people have made up their minds.

And so have the pollsters. There has been extremely little disagreement between them. If we go back over the last two weeks of the race, we see that Tory's support has registered between 39% and 44% in every single poll - between 42% and 44% if we look at just the last five. That is incredibly consistent.

There has been a little more variation for Ford (29% to 34%) and Chow (21% to 25%) but those are marginal differences. Rarely do we see numbers clustered together so closely.

If we look at just the final three polls, we'd see a range for Tory of between 42% and 44%, Ford between 31% and 34%, and Chow between 21% and 25%. That would suggest a clear 1-2-3 finish for the three candidates. But let's extend that further, taking into account the margin of error for the highest and lowest results for each of the candidates.

There are a few different scenarios in those ranges: a huge Tory victory by a margin of almost 20 points, or a close result with a margin of just three. Chow could finish in third place by a large degree, or potentially could narrowly edge out Ford for second.

If anything is going to skew these numbers, it could be turnout. It is always woefully low in municipal races, and I suspect that it might not be too high today either. If it was a closer race or if Rob Ford was still on the ballot, there could potentially be more interest. But as it stands, Doug Ford is not in range to win and Tory is not the kind of 'exciting' candidate that people will turn out in droves to vote for. On the other hand, the mayoral campaign has been so present in the lives of Torontonians for the last year that perhaps they will turn out in large numbers anyway. We'll see.

If turnout is determinant in the outcome, it seems that Tory should still have an advantage. Ipsos Reid gave Tory 51% support among likely voters, a gain of nine points over his standing among all eligible voters. Mainstreet Technologies gave him a boost of two points to 44%. Both pollsters agreed that Ford would take the biggest hit, dropping him by five to six points. For Chow, it was a bit of a wash. All signs point to a Tory victory today.

Though only a few firms were active during the race, polling in the campaign seemed omnipresent. In the end, they all agreed on the final outcome and were more or less in line throughout the last year. Will they be vindicated or could a surprise be in store tonight? Only a few hours remain before we'll find out and Toronto's long ordeal will be over.
Posted by Éric at 9:29:00 AM