There was a relative flurry of polls in the month of September, as parliamentarians got back to work in Ottawa. Five national polls and two in Quebec surveyed almost 9,000 Canadians, showing that support has been mostly holding steady for the last few months. And that means a continued sizable lead for Justin Trudeau's Liberals. 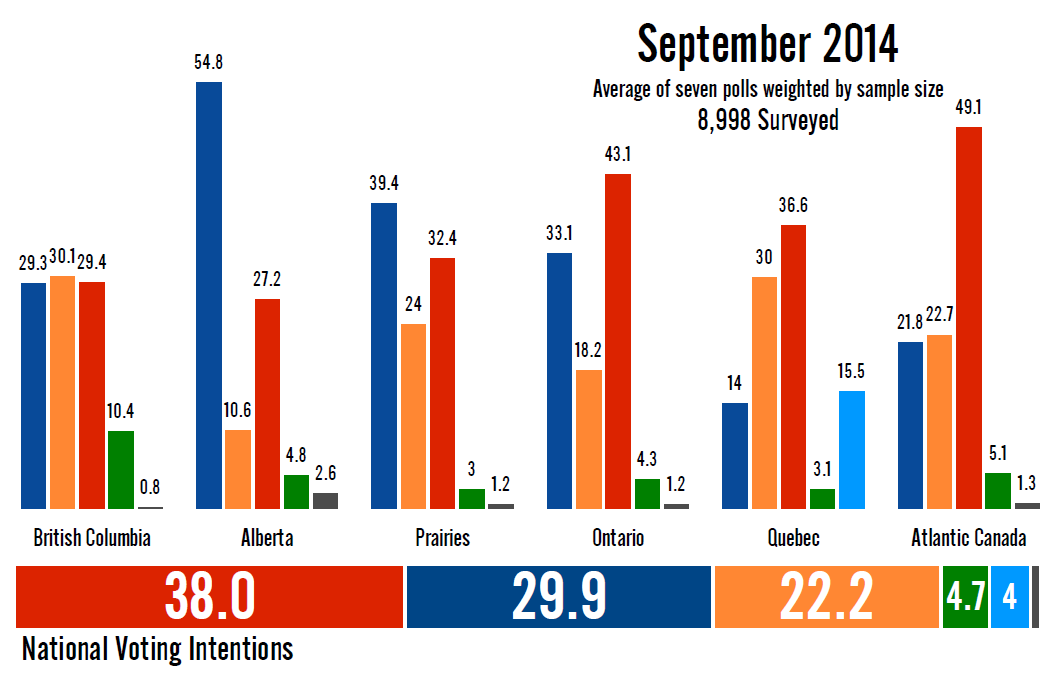 The Liberals averaged 38% support in September, unchanged from where they were in August and marking the third consecutive month with the party between 38% and 39% support - a high for them since at least 2009.

The Conservatives were down 0.8 points to 29.9%, while the New Democrats were up 1.5 points to 22.2%. Despite the NDP's gain, the party has been between 21% and 22% for three months now, their lowest since before the 2011 federal election. Undoubtedly, the NDP slump and Liberal strength are related.

The Liberals were also in front in Quebec, down 0.6 points to 36.6%. The NDP was up 1.2 points to 30%, while the Bloc Québécois dropped 0.5 points to 15.5%. The party has been stagnant or dropping for four consecutive months now under Mario Beaulieu. The Conservatives were unchanged at 14%, the level of support they have averaged in six of the last seven months. The Greens were down 0.1 point to 3.1%. With these levels of support, the Liberals would likely win around 143 seats, with 112 going to the Conservatives, 81 to the New Democrats, and two to the Greens. The Bloc would be shut out.

Compared to August, this represents a drop of four seats for the Liberals, eight for the Conservatives, and one for the Bloc, while the NDP picks up 13.

The Liberals picked up six seats in Ontario and one in the Prairies, but dropped one in Alberta, three in British Columbia, and seven in Quebec (recall that, despite the overall Liberal lead in the province, polls suggest the NDP has the edge among francophones).

The Conservatives gained one seat in Alberta and two in the Prairies, but dropped four in British Columbia and seven in Ontario.

The New Democrats were down three seats in the Prairies, but up one in Ontario, seven in British Columbia, and eight in Quebec.

Now that the show has returned for the fall and the parties are in full pre-election mode, it will be interesting to see how the polls shift in the coming months. Stephen Harper's Conservatives have yet to gain any traction or put a dent in the wide lead that the Liberals have taken in the summer. Thomas Mulcair's NDP is showing signs of life in B.C. and Quebec (vital battlegrounds for them) but is struggling in Ontario. Can the Liberals continue to hold off their two rivals?
Posted by Éric at 10:57:00 AM