Tight race in Alberta in new polls as by-elections loom

With four provincial by-elections just around the corner in Alberta, two new polls suggest the race could be tight both province-wide and within the two cities at play. 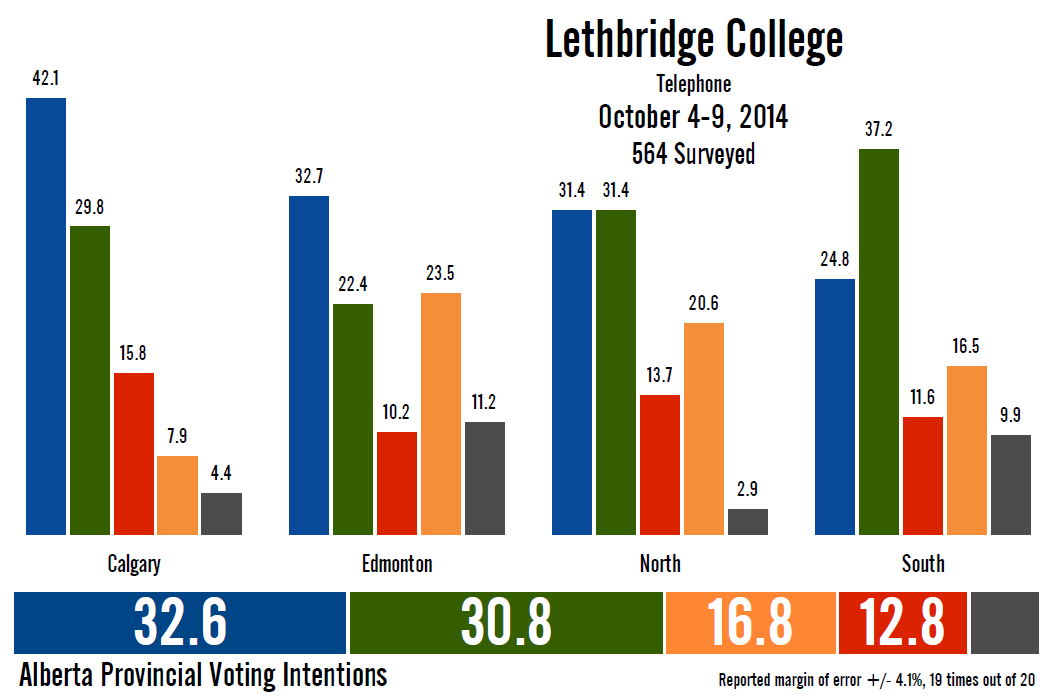 We'll start with the poll from Lethbridge College, which reports on an annual basis. We last heard from the school in October 2013.

The poll pegs Progressive Conservative support to stand at 32.6%, down 3.5 points from where the party was a year ago. That marks the lowest that Lethbridge has registered PC support to be since 2009, when it started polling.

Wildrose was up 1.4 points to 30.8%, their highest score in Lethbridge polling.

The New Democrats trailed with 16.8%, while the Liberals were at 12.8%. Support for other parties (which presumably includes the Alberta Party) was at 7%, up 1.4 points.

It is a close race, which is in step with the last two polls we have seen out of the province from Léger (31% to 26% in favour of Wildrose in June, 33% to 29% in August-September). While that is, relatively speaking, good news for Wildrose, this does still represent a level of support somewhat below where the party was in 2012. They have come into contention almost by default, as the PCs shed more than 10 points' worth of support.

At the regional level, the PCs enjoyed sizable leads in both Edmonton and Calgary, were tied with Wildrose in the northern part of the province, and well behind in the south.

But the results in Edmonton and Calgary are out of step with the recent Léger polls out of Alberta. The Tories have averaged just 27% support in those polls in Calgary, versus 42% according to Lethbridge. While both the NDP and Wildrose polled lower in the Lethbridge polls than in the Léger surveys, it is among Liberals that the difference is most important: an average of 23% instead of the 16% here.

Now, we could consider that perhaps the arrival of Jim Prentice has transformed things in both Calgary and Edmonton, as Liberals flock back to the PCs now that it is under a Red Tory. While that might be an intuitive conclusion, Lethbridge College showed higher results for the PCs than other polls did in October 2013, so we may be looking instead at a methodological quirk. 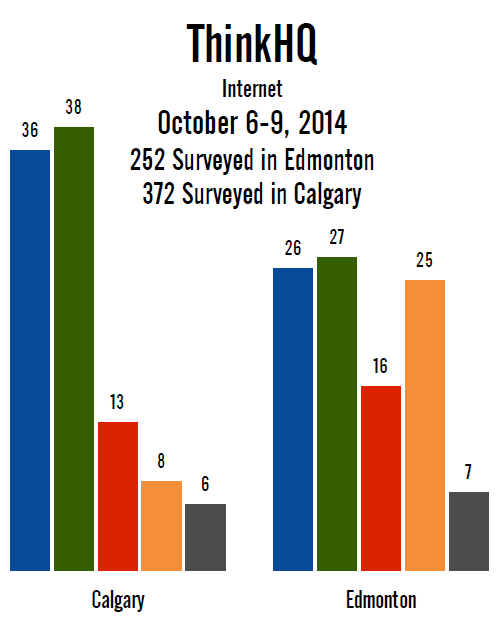 The other poll was conducted by ThinkHQ in its 'Eye on Alberta' regular report. Only the results of the poll in Calgary and Edmonton proper (not the metropolitan regions or CMAs, as Lethbridge College has it) were released to the public.

In Calgary, ThinkHQ puts Wildrose narrowly ahead at 38% to 36% for the Tories, with the Liberals well behind at 13% and the NDP at 8%. Since July, that represents a gain of eight points for the Tories, who have been picking up steam in the city for some time. The PCs were at just 20% in Calgary proper in March, while Wildrose has fallen 10 points since then.

The contest was a close three-way race in Edmonton, with Wildrose at 27%, the PCs at 26%, and the NDP at 25%. That marks a drop of five points since July for Wildrose, and a gain of four points for the Tories. Here again, the PCs have been rising, as they were at just 15% in Edmonton proper in March.

It seems that Prentice has had a positive effect on the Tories' numbers (though he only recently won, he has been the heir apparent for months). But he has still not put the party in a position to win a province-wide election - ThinkHQ mentioned in its report that Wildrose still held a provincial lead, and even with the numbers from Lethbridge's poll the PCs would only barely eke out a majority, if at all.

So the three by-elections in Calgary and the one in Edmonton should still prove a difficult test for the Progressive Conservatives. These were all relatively safe ridings, so they should still be favoured to win them all. But if Wildrose is as strong in Calgary as ThinkHQ suggests, the PCs will be hard-pressed to hold all four seats.
Posted by Éric at 10:23:00 AM