Polling has been a little thin lately, so let's take a look at the "only poll that counts." (As an aside, I loathe that phrase - it is the equivalent of saying "the only time your opinion counts is when my job is at stake.") And that means every federal election that has been held since 1867.

One of the things that struck me as I constructed the chart below was the degree of stability in Canadian politics. When you see the peaks and valleys, you may wonder what I'm on about. But political parties have often stuck to a fairly steady level of support.

This was particularly so early on in Canada's political history. Until the First World War disrupted the old order, parties shifted by only a handful of points. Between 1867 and 1911, the Conservatives took between 45.4% and 53.4% of the vote without fail. The Liberals captured between 45.1% and 53.8%. It was shifts in the margins that changed governments.

In their times, the CCF and Social Credit (with the Ralliement des créditistes) had a solid chunk of the vote as well, hardly shifting from one election to the next.

Of course, there were moments of great change: the first appearance of a three-party system in 1921, when the Progressives and United Farmers took 21.9% of the vote. The depression, followed by the Second World War, heralded a collapse in the Conservatives that was only briefly undone by John Diefenbaker between the 1957 and 1962 elections. Then there was the smashing victories by Brian Mulroney in the 1980s, followed by the final collapse of the Progressive Conservatives and the inauguration of a five party system. Most recently, there has been the swift decline of the Liberals and the breakthrough of the NDP in 2011. These again may be reversed in 2015.

The chart I put together below shows the average results for each of the parties and their various iterations over select periods of time. In the brackets above each of the years I've put the reason why I selected these periods (i.e., a two-party system, a three-party system, the formation of the NDP, the collapse of Social Credit, etc.). 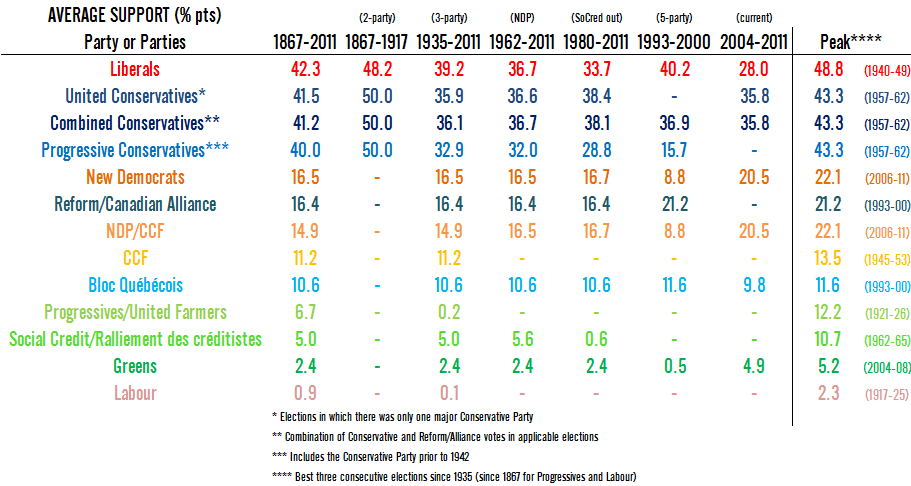 Overall, the Liberals have had the best historical performance with an average of 42.3% support, followed by the various classifications of the Tories (between 40% and 41.5%).

The NDP has averaged 16.5% support since 1962, putting them just up on the Reform and Canadian Alliance parties (who, recall, did field candidates in 1988).

The CCF averaged 11.2% during its history, while the Bloc Québécois has averaged 10.6% support. These are the only parties to have averaged over 10% support over their entire history.

The Progressives and United Farmers averaged 6.7% support, followed by Social Credit at 5% and the Greens at 2.4% (the Greens first fielded candidates in 1984, and took less than 1% of the vote in every election until 2004). Labour candidates averaged 0.9% in contested elections.

If we look at the era of the two-party system, from 1867 to 1917, the Conservatives were just a few points ahead of the Liberals. But since the three-party system started in earnest in 1935, the Liberals have averaged 39.2%, against 32.9% to 36.1% for Conservative parties.

Since the NDP was formed, Liberal support was roughly even with the Conservatives at about 36.7%, and since Social Credit and the Créditistes petered out in 1980, the Liberals have averaged 33.7% to 28.8% for the PCs or 38.1% for the combined totals of the PCs/Reform/Conservatives. The NDP upticks to 16.7% over that time.

I also identified each party's 'peak period', which I have defined as three consecutive elections starting in 1935 (and for the Progressives and Labour, prior to that).

It can be difficult for parties to put together three good elections. Consider Mulroney's victories in 1984 and 1988, in which he averaged 46.5%. That was the Tories' best performance following the inauguration of a three-party system. But those two elections were book-ended by defeat in 1980 and catastrophe in 1993.

The Liberals had their highest peak between 1940 and 1949, not coincidentally straddling World War II. The Liberals averaged 48.8% over that time, the PCs averaging just 29.3% and the CCF taking 12.5%.

The Conservative peak occurred under Diefenbaker between 1957 and 1962, when the party averaged 43.3% support. The Liberals took 37.8% over that time, the NDP/CCF taking 11.2%, and Social Credit averaging 7%.

Social Credit and the Ralliement peaked between 1962 and 1965, when together it averaged 10.7% support. That still put it behind the NDP, a party it never displaced for third spot.

The Progressives and the United Farmers peaked between 1921 and 1926, when they together averaged 12.2%. This overlapped somewhat with the peak of Labour candidates, who took 2.3% of the vote between 1917 and 1925. Though the three-party system only consistently took its place starting in 1935 with the formation of the CCF, from 1921 to 1930 the Liberals and Conservatives were deprived of an average of almost 15 points.

And that ends our little trip down memory lane as the on-going history of Canadian politics continues.
Posted by Éric at 12:33:00 PM