We have been starved for new polling data of late, so what better way to feed the beast than with a massive poll with a sample of over 8,000 people and breakdowns for every province (and even the GTA)?

Last night, Global News reported on the newest survey from Ipsos Reid conducted over three weeks between November 10 and December 1. The numbers continue the trend of softening Liberal support and a Conservative Party that, either by default or due to a small uptick, has moved into a near-tie with Justin Trudeau's party. 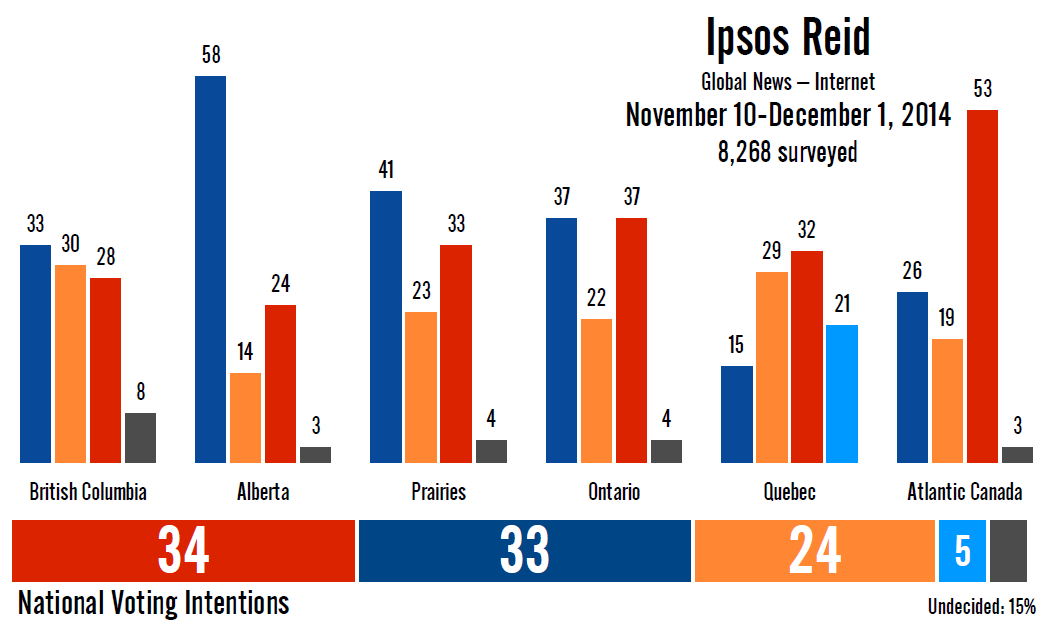 The Liberals were nevertheless ahead in the poll with 34% support, a drop of four points since Ipsos Reid's previous survey of September 9-12. The Conservatives increased by two points to move to 33%. The New Democrats were up one point to 24%.

Support for the Bloc Québécois was unchanged at 5%, while support for other parties was up one point to 4%. Note that, as is usually the case with Ipsos's polling, that includes the Greens.

Only the drop in support for the Liberals would be outside the margin of error of similarly sized probabilistic samples, and it is really the only trend we can definitively identify. Other pollsters have also recorded a drop in Liberal support from the highs of the summer. The numbers appear to be returning to where things were in the spring - in fact, Ipsos's poll of April 17-22 had the spread at 33% for both the Liberals and the Conservatives and the NDP at 24%.

But are the Conservatives in the midst of an upward swing? The evidence is accumulating that their numbers are improving, but the size of the uptick is exaggerated by the steeper decrease in Liberal support. The party has gone from 38% in Ipsos's previous two surveys to 34% here, whereas the Conservatives have gone from 31% in the previous two surveys to 33%. It looks more like a reset or wobble than momentum, but we will have to see where things go from here.

That the Ipsos poll was taken over three weeks does give us an indication that the Conservatives may be building up steam. Between November 10 and 24 (the bulk of the sample with 5,034 decided voters) the Conservatives were around 32% to 33%, while the Liberals were around 34% to 35%. The last week of polling (the smallest of the three samples, though still 1,468 decided voters) had the Tories at 35% and the Liberals at 33%. A statistical fluke or a sign of things to come?

Other tidbits from this large-sample survey: the Liberals led among voters between the ages of 18 and 54, while the Conservatives were ahead among voters over the age of 55. A turnout advantage may be hiding there.

At the regional level, the Conservatives and Liberals were tied in Ontario with 37% apiece, while the NDP was in third with 22%.

In Quebec, the Liberals were at 32%, followed by the NDP at 29% and the Bloc Québécois at 21%. With the exception of a single EKOS poll that put the party at 22% in October, that is the best result the Bloc has managed since Mario Beaulieu took over the party in June. The Conservatives had 15%.

The Conservatives were ahead in British Columbia with 33%, followed by the NDP at 30% and the Liberals at 28%.

In the Prairies, the Conservatives led with 41% to 33% for the Liberals and 23% for the NDP, with support for other parties jumping three points to 4%. The Greens have been putting up some oddly good numbers in the Prairies in recent polls, which coincides with this Ipsos uptick that is outside the margin of error. Something to watch?

And in Atlantic Canada, the Liberals led with 53% to 26% for the Conservatives and 19% for the NDP.

But because of the large sample in this poll, Ipsos kindly broke down the numbers even further. Let's take a look. 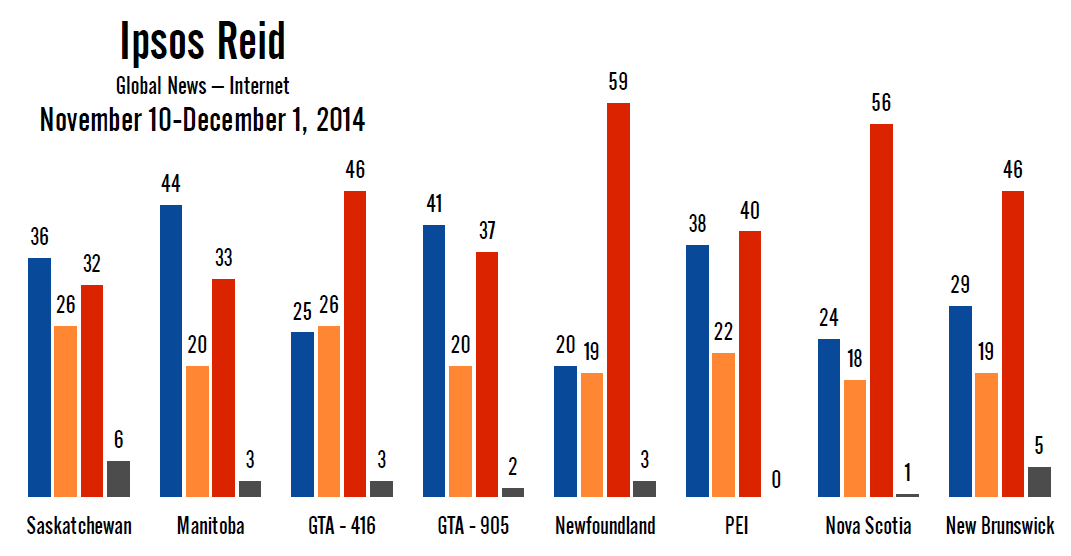 With the exception of PEI and, to a lesser extent, Newfoundland and Labrador, all of these are respectable samples.

Some of the numbers fall well in line with the sporadic results we've seen from other pollsters. The Liberal lead in Toronto is much like what we've seen elsewhere (and at the provincial level), while the closer race with stronger Conservative numbers in the 905 area code are not unusual. They do suggest that the Tories are not dead in the water in the GTA.

The numbers in Newfoundland and Labrador, Nova Scotia, and New Brunswick are well within the margins of what we usually see from the Corporate Research Associates when they put out federal results - big Liberal leads throughout. The numbers in PEI look a lot like the 2011 results, though CRA tends to give the Liberals a bigger lead here as well.

Saskatchewan and Manitoba are quite different from what we usually see from EKOS, the only pollster regularly putting out numbers for the two provinces. EKOS usually has the NDP in second in Saskatchewan and the Liberals either neck-and-neck with the Conservatives or first in Manitoba. If the Liberals are really that strong in Saskatchewan, we could see another MP from the province to join Ralph Goodale.

With these numbers, including the provincial-level results for the Prairies and Atlantic Canada, the likely seat outcome would be as follows.

Despite the one-point deficit, the Conservatives would come out on top with 132 seats, followed by the Liberals at 118 and the NDP at 83. The Bloc would win four seats again, and the Greens would take one.

Though relations between the Liberals and New Democrats appear to be at an all-time low at the moment, it is worth noting that the two parties could easily combine for a majority government. Otherwise, the Conservatives would have some difficulty governing in this scenario.

I wanted to take a moment to discuss the topic of house effects in relation to this poll. I often see comments along the lines of this or that pollster being biased towards one party or the other. The search for house effects is certainly a legitimate exercise as Nate Silver has shown again and again, but often the reputation a pollster has does not align completely with the data. And there is also an insidious insinuation that the bias is deliberately partisan, rather than methodological. Unless that can be explicitly proven, I chalk it up to silly tin-foil-hat conspiracy theories.

But anyway, let's look at Ipsos Reid and whether they have any house effects. It is worthwhile to compare Ipsos Reid to other pollsters, rather than snapshot election results more than three years ago.

In polls conducted by other companies with field dates within two weeks of the start and end of these six Ipsos Reid polls, the Liberals have averaged 35.7%, the Conservatives 29.4%, the NDP 22.3%, and Greens and others 7.6%.

Ipsos is sometimes charged with putting out higher numbers for the Conservatives, and here we see that indeed they have been 1.6 points higher for the Tories than other pollsters in 2014. But that is a rather small discrepancy when we consider the Ipsos sample is only six polls, in addition to the margin of error of all of these polls. And to focus on this number would be to miss the point - Ipsos is right in line with other pollsters for the Liberals, and is instead more bullish for the New Democrats than they are for the Conservatives. Yet Ipsos is rarely charged with being an NDP-friendly polling firm.

The biggest difference with Ipsos is that support for the Greens and others is roughly half of what other pollsters peg it to be. This is significant because what differentiates Ipsos most from other pollsters is that they do not give the Greens as an option in their questionnaire. Undoubtedly, this drags down what would be Green support, with consequences for the support of the major parties. This alone may explain more of the discrepancy between Ipsos and other pollsters than anything else (and we should note that Ipsos is, by far, not the pollster that most often finds itself out of the peloton).

Some might think the exclusion of the Greens from Ipsos's surveys is a problem, but consider that in the 2011 election the Greens and other parties totaled 4.8% support. Other pollsters would have us believe that this support has increased by more than half. That is certainly possible, but polls consistently over-estimate the support of the Green Party in virtually every jurisdiction. One of the pollsters that consistently does this the least is, as it turns out, Ipsos Reid.
Posted by Éric at 11:03:00 AM