Polls show Liberals still leading, but by how much?

Two polls published over the last two days show the Liberals still leading in national voting intentions. But the surveys by Léger and EKOS Research differ significantly over the size of that lead - as well as whether it is shrinking or growing.

First, the numbers themselves. 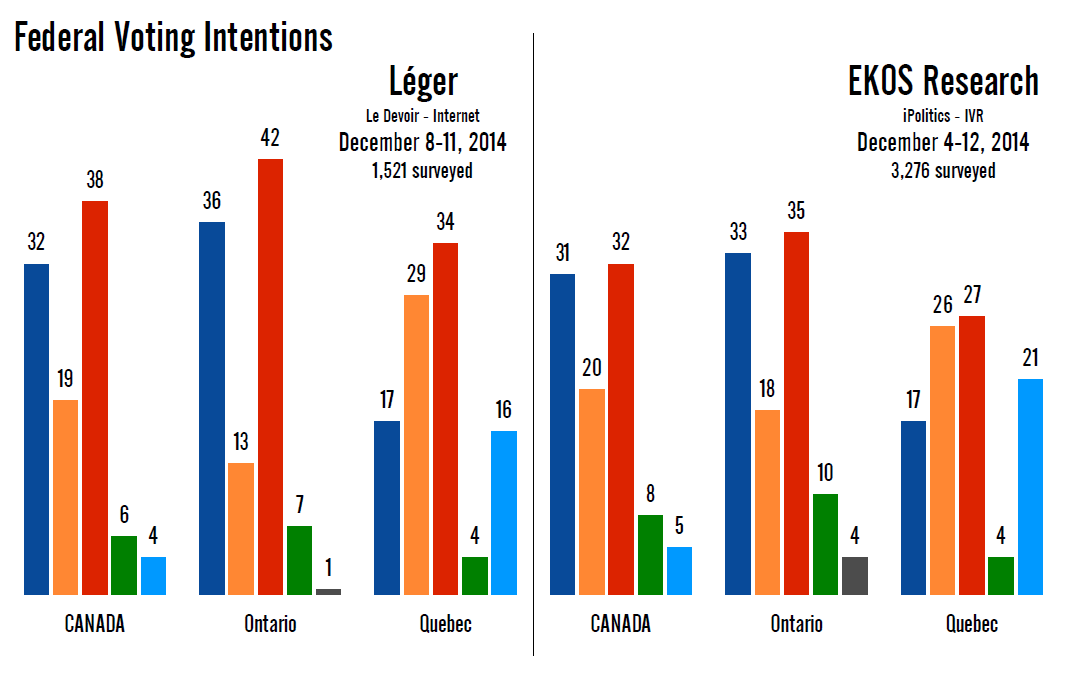 Léger, in the field between December 8 and 11 and reporting for Le Devoir, found the Liberals to have 38% support, up two points from where the party stood in Léger's previous survey of November 3-6.

The Conservatives were down one point to 32%, while the New Democrats were unchanged at 19%.

None of these shifts would be outside the margin of error of similarly sized probabilistic samples.

EKOS, in the field between December 4 and 12 for their new poll published by iPolitics, gave the Liberals 31.8% support, down 1.7 points from the previous survey of November 4-6.

Only the shifts for the Greens and others would be outside the margin of error.

But the differences between the Liberals and support for other parties is harder to explain. About three points of the discrepancy between EKOS and Léger for the Liberals cannot be explained by the margin of error, and about 2.6 points for 'other' parties. That those numbers are very close may not be coincidental, as EKOS routinely has support for other parties to be significantly higher than other firms. Throughout 2014, for example, 'others' have averaged 3.3% support in EKOS's IVR polling, compared to 1.1% for everyone else.

Discrepancies like these, however, can often be chalked up to methodological differences. EKOS is conducting its poll via interactive voice response, whereas Léger did its poll online. The two modes of contact may inherently produce slightly different results. The focus, then, should be on the trends instead.

Here there is a little more clarity. Over the last three Léger polls, all three major parties have been very steady. The Liberals went from 37% in October to 36% in November, before ending up at 38% here. That is a statistically insignificant wobble. The Conservative numbers have been 32%, 33%, and 32% - very stable. And the NDP has registered 21%, 19%, and 19% support over that time.

It is a little more complicated with EKOS. In the time span that Léger did those three polls, EKOS has done four. Three of them were on virtually the same dates, but the first was done online. The last three were done via IVR. It wouldn't be appropriate to look at the trends by mashing together those two very different modes of contact.

But Léger is showing a very different sort of margin between the Conservatives and Liberals, growing from three points to six points in this poll. Considering the stability in the numbers, we could say that the margin is simply moving back and forth with the wobble. But EKOS's trend is more towards convergence, with the gap being about five points at the end of October, four points at the beginning of November, and now one point. If those trends continue, the Liberals will be overtaken. On the other hand, if Léger's trend continues the Liberals will continue to lead comfortably.

Adding to the confusion this morning is a new poll by Forum Research, which I only noticed after I had updated the averages (it will be added tomorrow). The poll gives the Liberals 41% to 33% for the Conservatives and just 17% for the NDP. This would suggest Conservative stability, a Liberal uptick, and consistent NDP decrease. But Forum's one-day flash polls are perhaps more vulnerable to showing wonky results.

Returning to Léger and EKOS, however, the two polls do tell us something. The parties' support appears to be relatively stable, solidifying the newer, more competitive race that has taken shape since the summer. And the NDP remains stuck in third place without any sort of momentum.

But the differences in the numbers themselves have enormous consequences. If these were the final polls of an election campaign, we'd have a long night ahead of us. 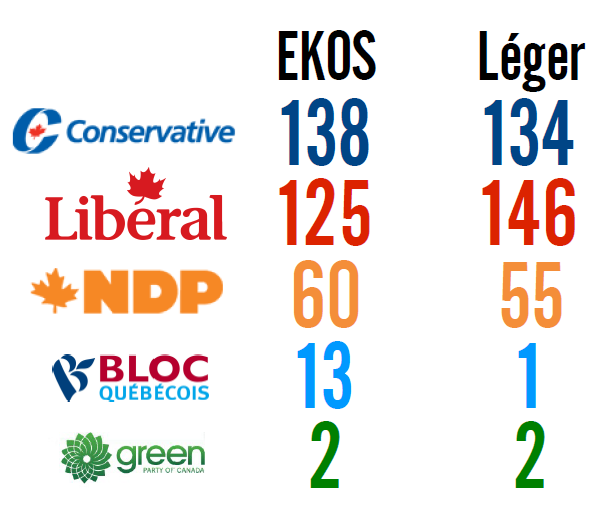 With EKOS, the Conservatives would manage to win a plurality of seats, taking 138 to 125 for the Liberals. The NDP would be reduced to 60 seats, while the Bloc would benefit from vote splits to take 13 seats in Quebec and obtain official party status again.

With Léger, however, the Liberals would win the plurality of seats with 146, the Conservatives taking 134 and the NDP just 55. The Bloc was not high enough in Léger's poll to be in a position to win more than a seat.

These seat numbers tell different stories. In the EKOS scenario, Stephen Harper might try to stay in office and govern with a minority. The opposition might then topple the government, but would need to work together to convince the Governor-General to give them a chance to govern rather than sending Canadians back to the polls (which could be the other outcome). The role of the Bloc would be marginal, but the party would be 'back' and regain much-needed funds and staff.

In the Léger scenario, convention would allow Justin Trudeau to head-up a minority Liberal government that would likely rely on the NDP to survive. Unlike the EKOS scenario, the Liberals and NDP would not necessarily have to formalize any sort of agreement, which might be more palatable to their bases. Harper likely steps down and a leadership race ensues, delaying any threat of an election, while the Bloc is marginalized further and might just cease to exist.

And all of this is with a few percentage points of difference, showing just how significant minor shifts can be when the race gets close. If things continue this way, particularly if the NDP can regain some ground, 2015 is setting up to be one of the most exciting elections in recent memory.
Posted by Éric at 10:51:00 AM