What's the threshold for a minority or majority government?

Let's take a look at this for all three parties. But first, a few words about how I came to these calculations. I started with the current averages and then uniformly lowered or raised each party's support in each region of the country. I based my adjustments on EKOS Research's last 'second choice' poll as follows:

We'll start with the Conservatives, who have the most efficient vote of the three parties.

The party won a majority governing in 2011 with 39.6% of the vote, but it could manage the feat with a little less. With 38.1% support against 30.3% for the Liberals and 20.7% for the NDP, the Conservatives could reach the magic 169 number and form a majority government. The Liberals would take 102 seats and the NDP would win 64.

Now to the Liberals, who find themselves needing more votes than the Conservatives to come out ahead in the seat count, or to obtain a majority government.

To reach the majority threshold, however, the Liberals need the NDP vote to drop much further. With 41.5% support to 29.9% for the Conservatives, the Liberals would take 172 seats and leave 118 for the Tories. The NDP, down to 18.3% of the vote, would take 44 seats.

Of course, the Liberals could also benefit from the Conservatives dropping much further below 30% than this, but we're working from current polling levels.

Regionally, the majority threshold awards 59% of the vote to the Liberals in Atlantic Canada, 45% in Ontario, 40% in the Prairies, 39% in Quebec, 38% in British Columbia, and 30% in Alberta. Here again, there could be a more efficient way to reach the majority threshold by, say, taking more of the vote in Ontario and a lot less in Alberta and the Prairies.

Finally, the New Democrats. Because of their advantage in Quebec (akin to the Conservatives' advantage in the West), the NDP can reach the plurality threshold with less of the vote than the Liberals, But they need more of it to reach majority territory.

At the majority threshold, the NDP needs to be at 42.5% of the vote nationwide. The Conservatives would be at 28.1%, but the Liberals need to sink to about the same level of support they had in 2011, with 20.5%. The Greens need to do worse than 2011, while the Bloc vote is cut in half. With these numbers, the NDP takes 172 seats to 100 for the Conservatives and 65 for the Liberals.

The NDP would take 49% of the vote in Quebec, 46% in British Columbia, 41% in the Prairies, 40% in Ontario, 40% in Atlantic Canada, and 34% in Alberta. The NDP's support is more uniform than the other parties, with the six regions differing by no more than 15 points. That range is 29 points for the Liberals and 41 for the Conservatives.

What about the Greens and the Bloc? Their immediate goal should be to achieve official party status, or 12 seats. The Bloc can reach that level quite easily due to vote splits with around 21% support in Quebec, if the NDP drops to 27% and the Liberals to 32%.

For the Greens, it is much more difficult and, to be honest, the model gets a little wonky once we start trying to extrapolate for this party. But the Greens would win their 12 seats with 18% support nationwide, with the Conservatives at 31%, the Liberals at 29%, and the NDP at 16%.

But just how plausible are the thresholds for the major parties? We've seen the Liberals and Conservatives at the plurality level in many polls recently, but the majority threshold has been harder to achieve. 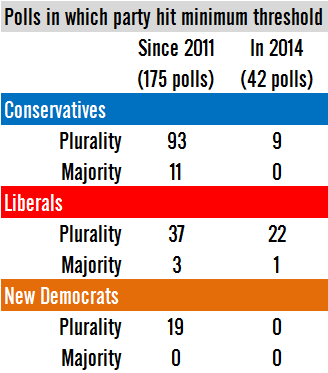 (Note: the numbers above don't add up to the total number of polls because in some cases no party would have reached the minimum thresholds. For instance, if the Liberals were at 34% and the Conservatives at 31%. Obviously, some party would win a plurality in those cases but the numbers above are in terms of the threshold, which can be considered the level of support where winning a plurality/majority would be very likely.)

There have been 175 federal polls conducted since the 2011 election, and 42 in 2014 alone. The Conservatives have hit the plurality threshold in 93 of those polls (53%), but only in nine of them in 2014 (21%). The party reached the majority threshold in 11 polls, but the last time that happened was in January 2012, almost three years ago.

The Liberals have been above the plurality level in 37 polls since 2011 (21%), but 22 of them have been in 2014 (or 52% of those held this year). The majority threshold has only been hit three times, however, and all in polls by Forum Research (the firm that routinely has the party highest). Only once was that majority threshold reached in 2014.

For the New Democrats, the plurality threshold was reached in 19 polls since 2011 (11%), but these were all in the period between March and September 2012. The party never hit the majority threshold in polls conducted since the last election, and perhaps never before that either.

This little exercise does show how difficult it will be for the parties to secure a majority government in 2015. The Conservatives clearly have the easiest path, but it has been a very long time since the party has been that strong in the polls (and that was at a time when the future of the Liberals was still in question and the NDP was leaderless). The Liberals could conceivably reach the majority level if the campaign goes very well for them, but it would be a tall order. A majority for the NDP seems out of the question.

A plurality for any of the parties would be easier to achieve, of course, with the Conservatives having the easiest route. The Liberals could pull more seats out of fewer votes than estimated here if their support proves to be more efficient than expected in places like Quebec. Nevertheless, they likely need to win by a relatively comfortable margin to come out ahead in the seat count. The New Democrats have it within their reach if the Liberals falter on the campaign trail, but it would require virtually all of that lost Liberal support to go their way, rather than towards the Conservatives.