Liberals up, Conservatives stable, NDP down in 2014

It's that time of year again - the time to take stock of the year that is coming to a close. And from a polling perspective, that means comparing 2014 to the last few years. By that measure, it was a good year for the Liberals and a bad one for the New Democrats, while the Conservatives managed to slow their decline, perhaps even tread water, as we enter a climactic election year.

The past year has been an interesting one. Granted, it was quieter at the federal level than previous years. No election was held as in 2011, and no major party leaders were named, as in 2012 and 2013. The Bloc Québécois did get a new leader in Mario Beaulieu, however, and as we'll see this has not been a positive development for the party.

It was a much more exciting year at the provincial level, as Canada's two largest provinces went to the polls. And both of these elections had their own surprises. The Parti Québécois went into the Quebec election hoping for a majority government, and they ended up almost relegated to third spot. The Liberals and Progressive Conservatives were neck-and-neck as the Ontario campaign began, only for the Liberals to emerge with a majority government. The election in New Brunswick went as expected, but nevertheless it is something that first-term governments were defeated for the second time in a row. And then there was the Toronto race.

Let's take a look at how the federal parties did in 2014, compared to previous years. I did this exercise in 2012 and 2013 as well. It is a simple average of all the polls conducted in a given year, providing a very macro-look at the political landscape and where the parties are going.

It was a rather stable year nationwide, as a total of 45 polls were conducted. In 2012, the New Democrats were able to take top spot for a few months, before losing it to the Conservatives. In 2013, the Liberals surged ahead of the Tories to move into first. But in 2014, the order of the parties never changed from start to finish. 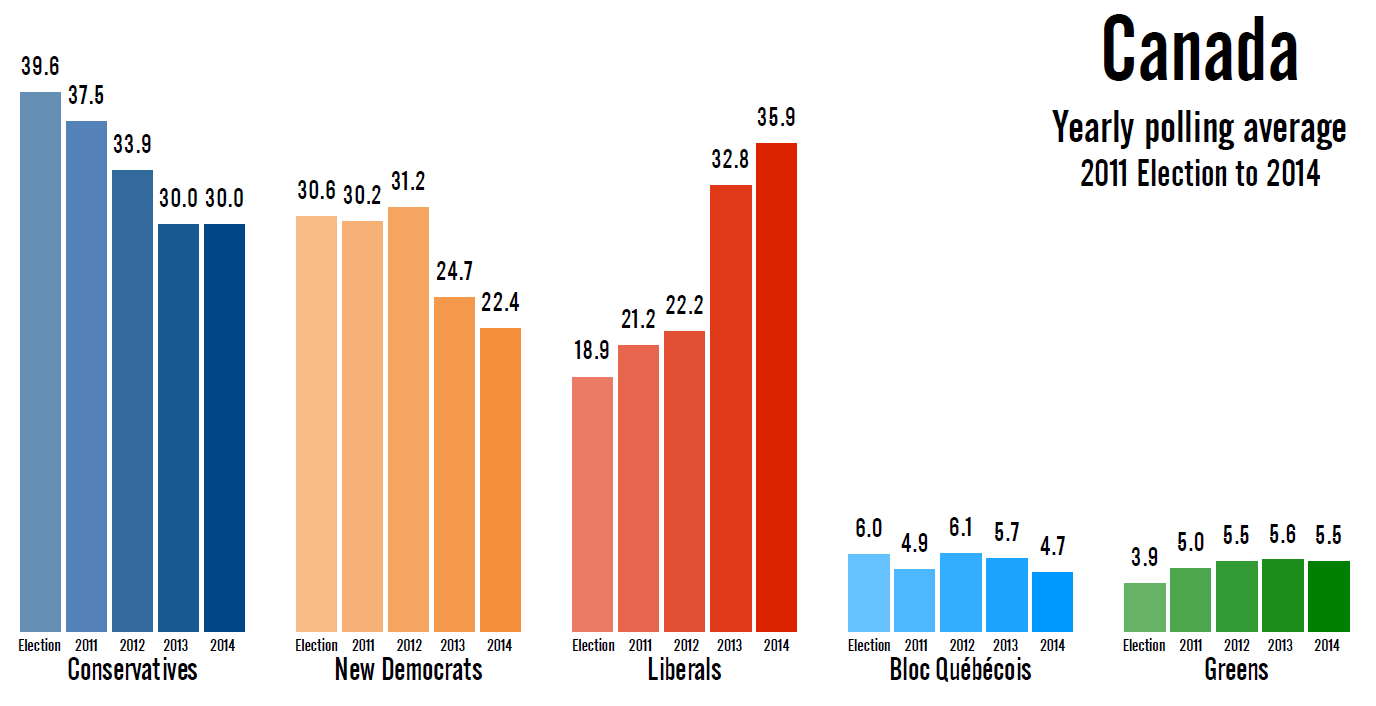 The Liberals averaged 35.9% support in 2014, a gain of 3.1 points over their average support in 2013 and part of a consistent trend of growth since the 2011 election (note that in this chart, as in all following ones, the 2011 year refers to polls taken that year after the federal election).

The Conservatives averaged 30.0% support unchanged from 2013. Still, it is confirms the drop the party has experienced since their majority victory in 2011.

(Note: An earlier version of this post had the Conservatives at 29.9% in the 2014 average. A new poll by Abacus Data, released since I wrote this post originally, bumped them up to 30%. As that tied their 2013 performance, rather than putting them 0.1 point down, I thought that was significant enough to update. I haven't bothered to update the regional numbers below with the Abacus results, as the effect was never more than one or two tenths of a percentage point, and did not change any of the trend lines. The updated numbers will be reflected in any future annual reviews, however.)

The New Democrats took a step backwards, falling 2.3 points to an average of 22.4% for 2014. That is their second consecutive annual drop, after putting up some good numbers in the second half of 2011 and throughout 2012.

The Greens have been very steady over the last few years, averaging 5.5% support in 2014. That is little different from their polling in 2012 and 2013. 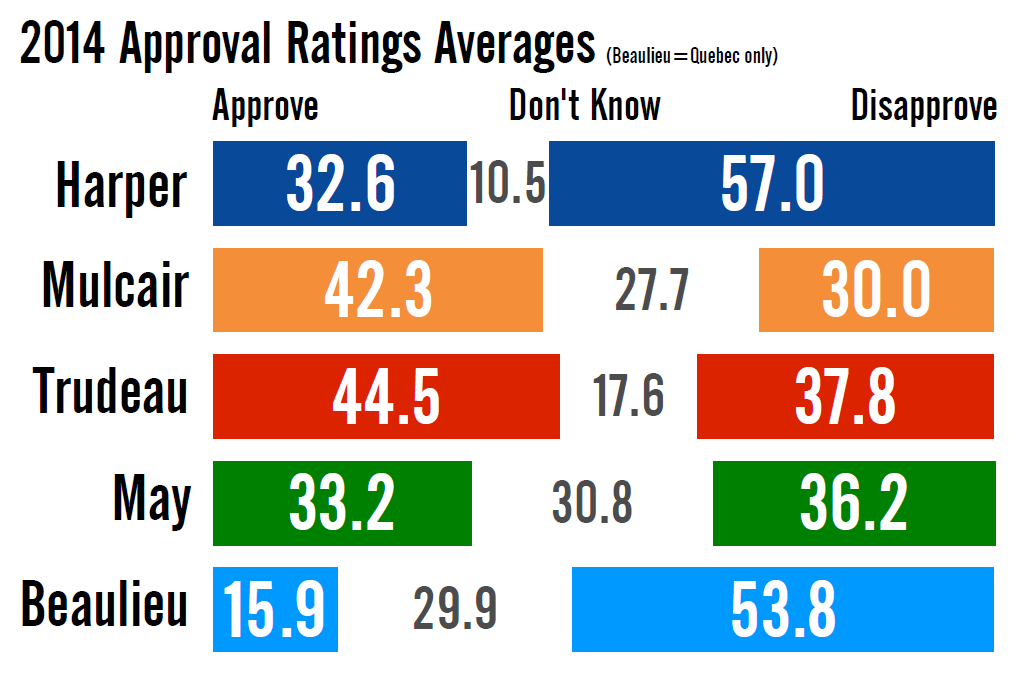 Justin Trudeau had the highest approval ratings in 2014, averaging 44.5% in the 26 polls that asked the question. His disapproval rating averaged 37.8%, while 17.6% on average did not know.

Trudeau's approval rating dipped slightly from 2013, when it averaged 45.6%. His disapproval rating was up more sharply, however, increasing from 30.4%.

There were fewer polls for Elizabeth May (six) and Mario Beaulieu (two) in 2014, but on average May's approval rating was 33.2%, with a disapproval rating of 36.2%. Beaulieu averaged an approval of just 15.9% in Quebec, with 53.8% disapproving of him.

To put that in some context, André Bellavance (the interim leader and Beaulieu's opponent in the leadership race), averaged an approval rating of 26% in the first half of 2014, with 41.5% disapproval in four polls.

Returning to voting intentions, the patterns that occurred nationwide were repeated in most regions of the country: a tiny Conservative drop, a larger NDP one, and a Liberal gain. 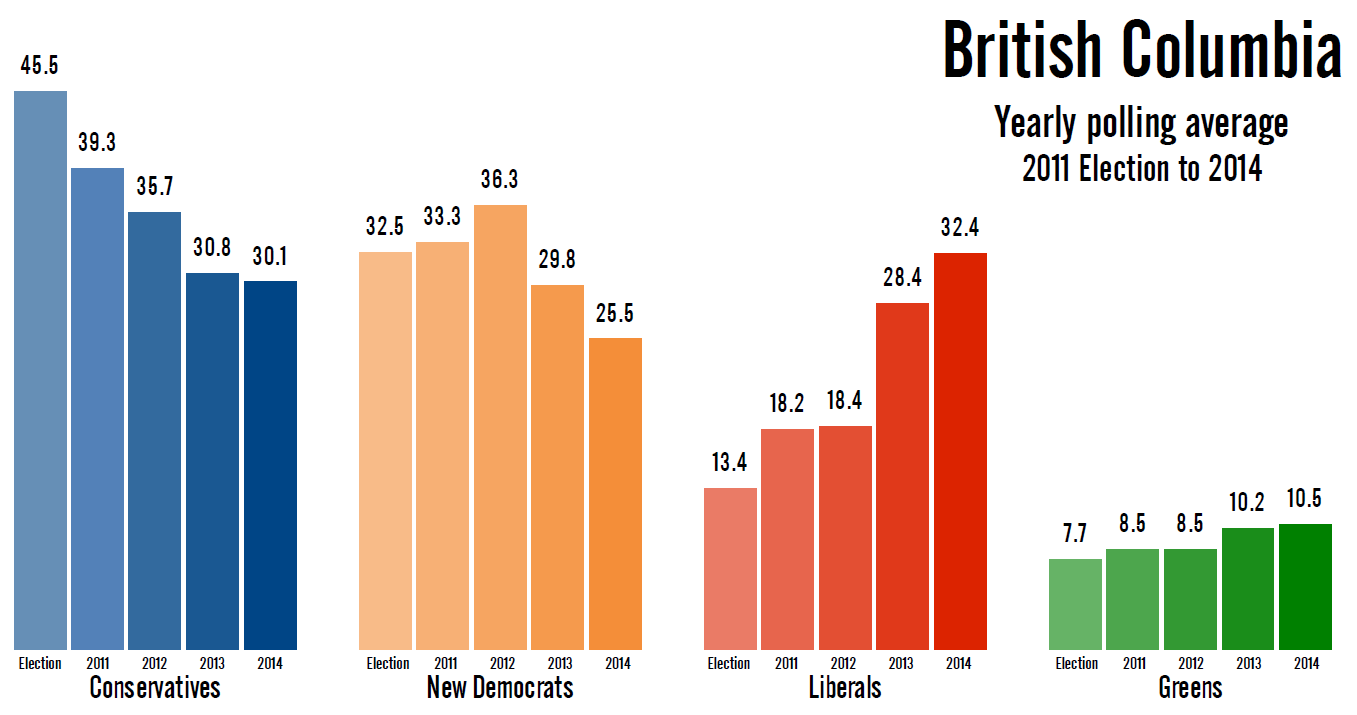 British Columbia was no different, with the Liberals averaging 32.4% support, a gain of four points over last year and more than twice their vote share of the 2011 election. Along with Atlantic Canada, B.C. was where the Liberals made their largest proportional increase.

The Conservatives were down slightly to an average of 30.1%, another drop for the party in B.C. The New Democrats were down 4.3 points to 25.5%, a disproportionate drop at the national scale, while the Greens were up slightly to 10.5%. They have been on a modest upswing in the province over the last few years.

The Conservatives were still in front in Alberta in 2014, of course, but dropped 2.1 points to 52.8%. Here again, they have been on a steady slide. 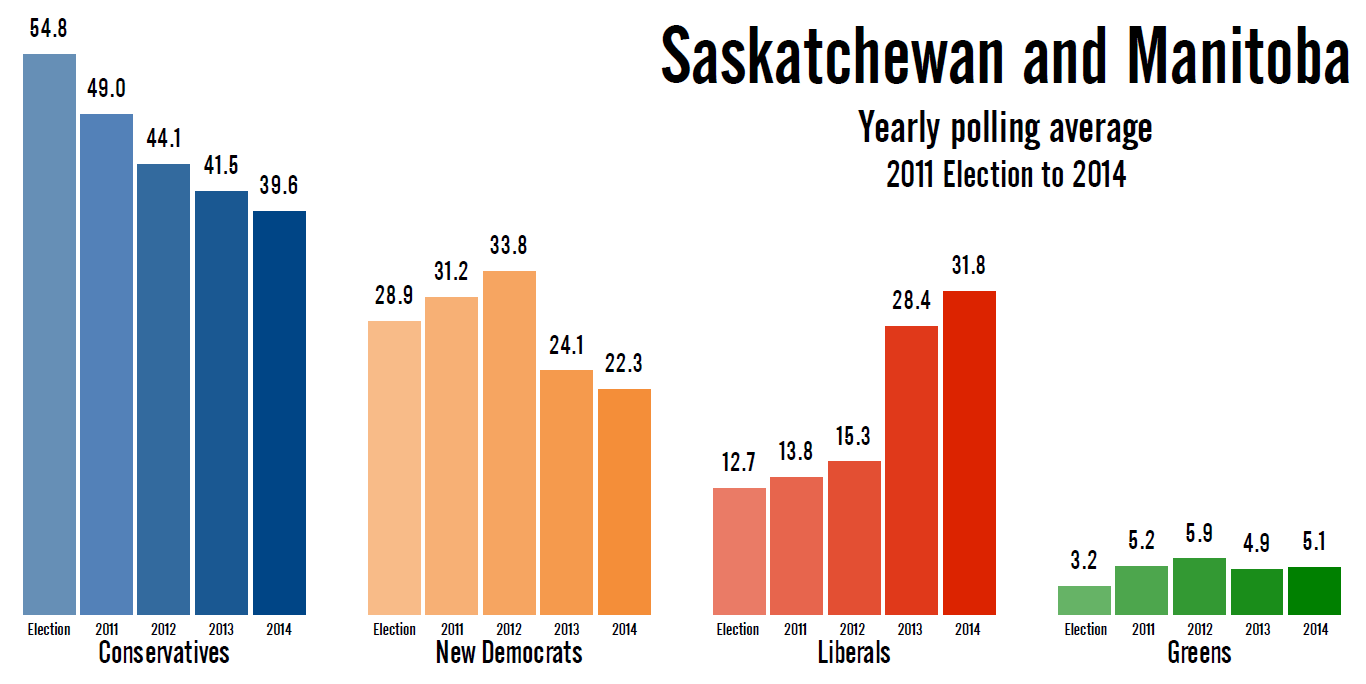 The Conservatives also led in Saskatchewan and Manitoba in 2014, with an average of 39.6% support. That was down 1.9 points from 2013, and one of the larger proportional drops for the party.

Thanks to the polling by EKOS Research (and the lone Ipsos Reid poll that broke it down further), we can take a look at federal support in Saskatchewan and Manitoba individually. EKOS's averages for the region match those for all pollsters, so this should be a representative breakdown of support.

In Saskatchewan, the Conservatives led in the 10 polls with a provincial breakdown with an average of 41.8% support. This put them ahead of the New Democrats, who averaged 24.7%, and the Liberals, who averaged 24.3%. The Greens averaged 6.7% support in the province throughout 2014.

In Manitoba, the Conservative lead was much smaller, with an average of 37.4% support. The Liberals were close behind with 35.8%, while the NDP trailed with 20.3% and the Greens with 4.9%. 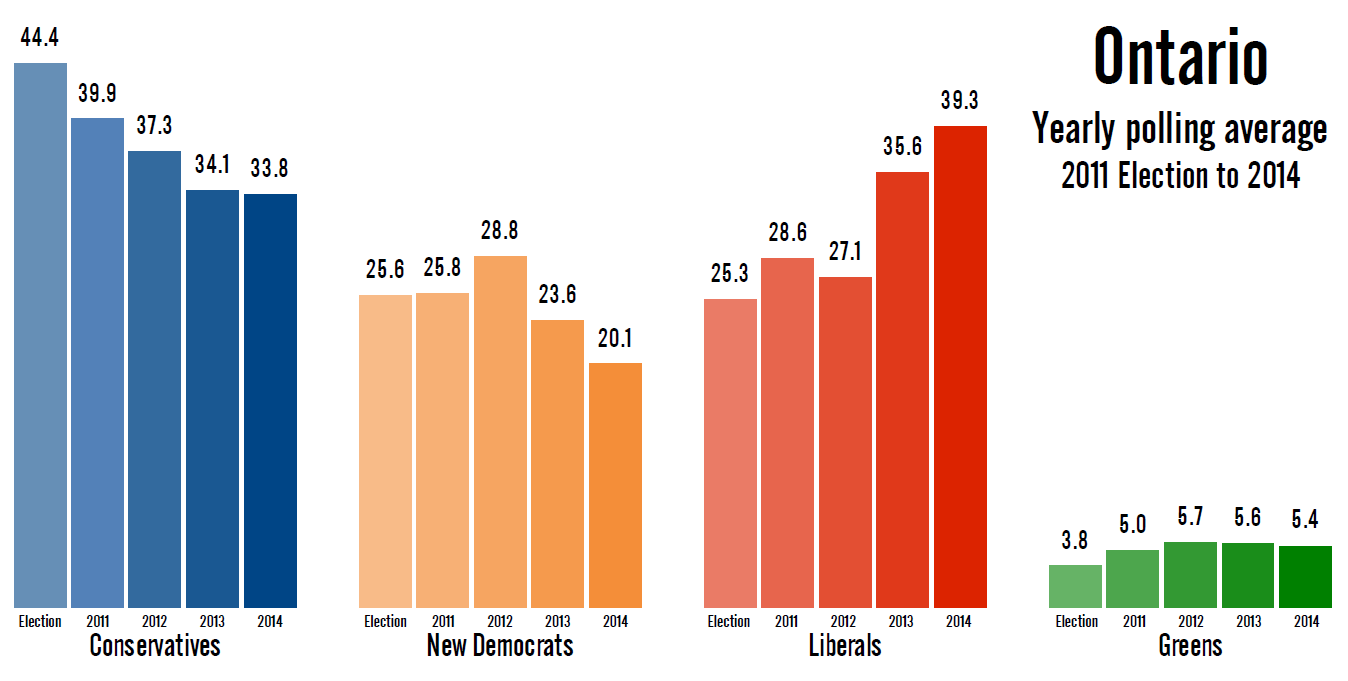 The Conservatives were down only slightly in the province in 2014, dropping 0.3 points to 33.8% support. Again, though, this is part of a steady trend of decrease.

The New Democrats suffered one of their larger proportional drops in the country in Ontario, falling 3.5 points to 20.1% in the province. The Greens, meanwhile, were down a little to 5.4%.

Quebec was the only region of the country that bucked the trends. Whereas the Conservatives and NDP were down everywhere else, they were both up in Quebec. And the Liberals made their smallest gain here.

The New Democrats were up 0.9 points to 29.2% in the province, lower than their 2011-2012 performances but their only increase in the country.

The Bloc Québécois was down 3,6 points to 18.5% support in Quebec, their second consecutive annual drop, and lower than their post-election performance in the polls. And a line should be drawn between before and after Beaulieu's leadership victory. In the first half of 2014, the Bloc averaged 21% support. Since Beaulieu's victory, the party has averaged just 16.6% support.

The Conservatives were up over last year, the only part of the country where that occurred. They were up 1.7 points to 14.2%. While that is a gain, that ranks lower than their 2011 and 2012 performances.

The Greens were down 0.7 points to 3.3%, their lowest level in the province since the election.

Thanks to the breakdowns we get for the province from CROP, we can investigate why Quebec bucked the national trends more closely. First, let's take a look at the polling averages for the year by language. 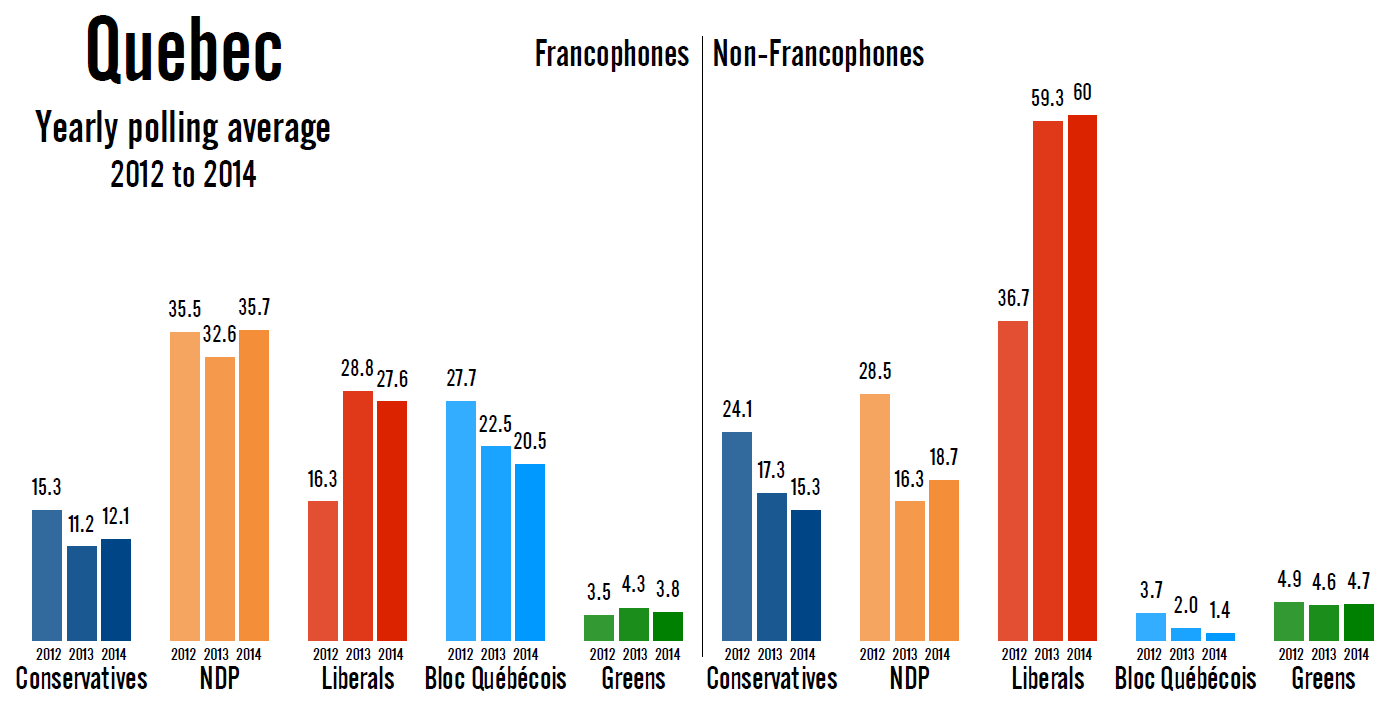 The New Democrats made gains among both francophones and non-francophones in 2014, averaging 35.7% support among French-speakers in the province. That was a gain of 3.1 points over 2013, and higher even than the party's standing in 2012.

The Liberals dropped among francophones in 2014, falling 1.2 points to 27.6%. That is comfortably above the 16.3% the party had before Trudeau became leader, but nevertheless puts them well behind the NDP.

The Bloc has fallen significantly since 2012 among their only electorate, with 20.5% support among francophones in 2014. That was down two points from 2013, and more than seven from 2012 when the party was in second place. Again, this can be chalked up to Beaulieu. Before he became leader, the Bloc was at 23.4% among francophones in 2014, a gain over 2013. Since, the party has dropped to 18.9%.

The Liberals still dominate among non-francophones, averaging 60% in 2014, up slightly from 2013. That is almost twice their support among this electorate in 2012.

The New Democrats come up a distant second among non-francophones, with 18.7% support, up 2.4 points from 2013 but down almost 10 points from 2012. The Conservatives are also down significantly from 2012, with 15.3% support on average.

If we look at support at a regional level, we can also see where the NDP made its gains in 2014. They occurred primarily on the island of Montreal and in Quebec City.

The Liberals made a large gain in the regions of Quebec, however, with an average of 36.5% support. The NDP was second with 29.6% and the Bloc was third with 18.3%. For the Liberals, their support in this part of the province has more than doubled since 2012, suggesting the party could be more competitive than expected outside of the two main urban centres.

So there you have it. The Liberals made gains throughout the country in 2014, but are showing some signs of peaking in Quebec, where their support among francophones actually dropped. The Conservatives are still slipping everywhere except Quebec, where they made only a modest gain, but the party has appeared to slow the rate of their decline. Considering where the polls have been recently, they may be reversing it. And the NDP appears to still be losing steam outside of Quebec, whereas in Quebec they are still the party to beat among francophones. An interesting landscape as 2015 begins.

This will likely be my last post of the year, though I will still do some updates to the other sections of the site over the next two weeks. It has been a really great year, and I'd like to thank you, my readers, for your support. Next year will be huge. Rest up over the holidays!
Posted by Éric at 11:06:00 AM