The electoral record of "un-elected" premiers

The electoral calendar for 2015 was already going to be dominated by the federal election in October. But quickly the calendar is getting more crowded, as three provinces could find themselves in the midst of a provincial election campaign in a matter of months. The reason? A trio of "un-elected" premiers looking for a fresh mandate of their own.

I use the term "un-elected" with caution. It doesn't represent how our system works. We elect representatives who may be a member of a party, the leader of which becomes the premier if he or she has the confidence of the legislature. In practice, though, most Canadians don't see things this way. Who leads a party has a great influence on their vote.

Three provinces have or are about to have "un-elected" premiers at the helm: Alberta (Jim Prentice, who became premier on September 15), Newfoundland and Labrador (Paul Davis, who became premier on September 26), and Prince Edward Island (Wade MacLauchlan, who will take over the governing Liberals in February). Davis is supposed to call an election this year, while rumours are swirling about snap calls this spring by both Prentice and MacLauchlan.

Recent history suggests that a snap call might be a good idea.

Of course, this is not entirely an accident. A premier is more likely to stay in office if he has a chance of re-election. Many times, a premier has resigned to avoid an impending defeat, leaving their replacement to either refresh the party and give it a chance or take one for the team. This alone will make the record of "un-elected" premiers look worse than perhaps it should.

Nevertheless, here is how the track record of "un-elected" premiers looks over the last 50 years. I've ranked them by the amount of time they spent in office before facing the electorate for the first time as party leader. You'll notice that the longer they waited, the worse their chances got. 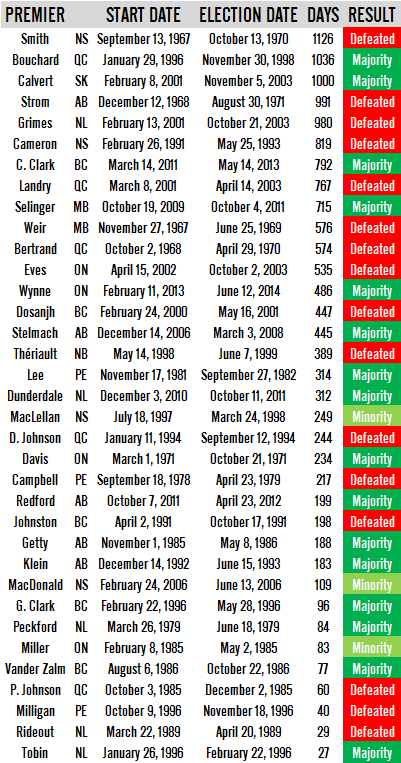 This, too, may not be an accident. A newly sworn-in premier who thinks he or she has a chance to win will be more likely to call an election, whereas one who thinks defeat is inevitable will delay and hope that their chances get better (on average, they have waited 418 days).

So, perhaps it is better to look at these results not as a guide to electoral chances, but as a guide to why a premier may be delaying an election call (or planning a quick one).

The fate of "un-elected" premiers can be split into three groups.

The most successful called an election within 188 days, or roughly six months, of becoming premier. Those who did, and there have been 11 of them since 1965, won eight times. Brian Tobin and Tom Rideout, both from Newfoundland and Labrador, were the quickest to pull the trigger. Both faced the electorate within 30 days. Tobin won a majority, but Rideout was defeated.

The next group of premiers called an election within 198 and 486 days of becoming premier. They had a much more mixed record, winning seven times and losing five times.

The last group of premiers are those who waited as long as they could. They likely faced the greatest hurdles, calling the next election between 535 and 1126 days of becoming premier. They include premiers like Ernie Eves, Bernard Landry, and Christy Clark. And they had a losing record, winning four times and losing eight. George Isaac Smith of Nova Scotia waited longest, holding off for more than three years before meeting defeat in 1970 (though just barely).

So what does this tell us, if anything, about the three provinces that could hold elections this year?

For Jim Prentice, it would appear he would be best off if he calls an election for March 22 or earlier. The cards are lining up for something along those lines. He gets into more uncertain territory if he waits for the period between April 1, 2015 and January 14, 2016. His odds get much worse if he calls it after March 3, 2016.

Paul Davis is looking like he will have little luck no matter when he calls the vote, but his chances would be best (historically speaking) if he calls it for April 2 or earlier. If he waits until 2016, his already bad odds will get worse.

Wade MacLauchlan is taking over a Liberal Party in PEI that is well position for re-election. But he has some time. If we place the beginning of his premiership on February 21, when the Liberal leadership acclamation will be held, the most advantageous window for him closes on August 28, 2015. Between September 7, 2015 and June 21, 2015 his odds get worse, and then get much worse after August 9, 2016.

It is a bit of self-fulfilling prophesy, though. The numbers are looking good for Prentice, so he is likely to call an election this spring. That puts him in the winners' group. The same likely goes for MacLauchlan, who has done nothing to quiet talk of a snap election. Davis, on the other hand, looks like he is waiting as long as possible. That will likely put him in one of the losers' groups. But if he does lose, it won't be because he is waiting. He is waiting because he might lose.
Posted by Éric at 10:50:00 AM