Last month was the busiest December in federal polling since 2010, with six national and one Quebec-only poll surveying some 17,000 Canadians being conducted. The results show the Liberals holding on to the lead for the 21st consecutive month, the Conservatives closing the gap, and the NDP suffering one of its worst months since before the 2011 federal election. 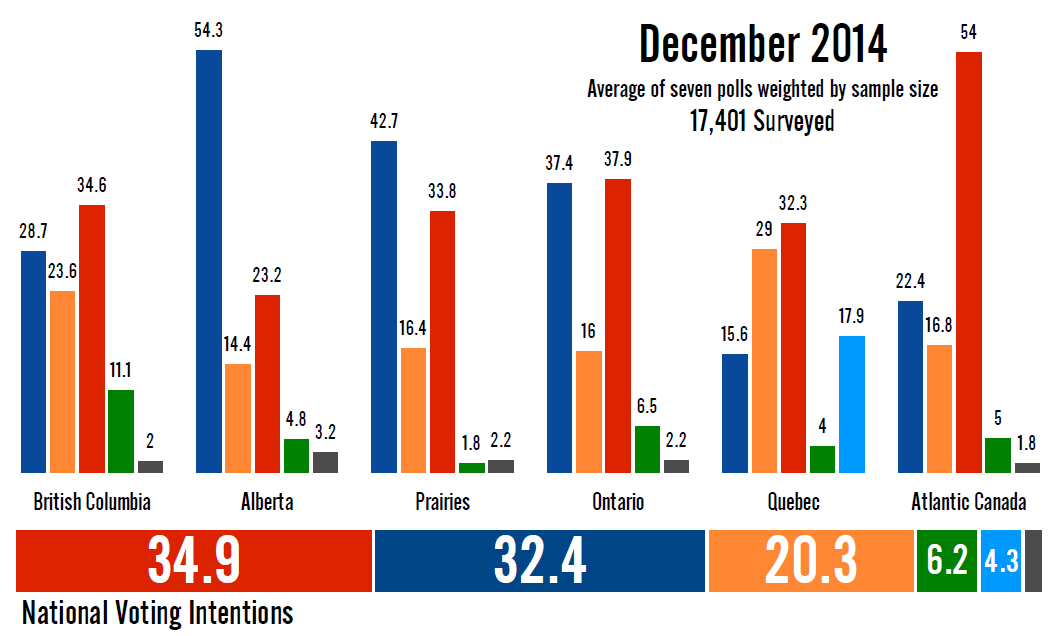 The Liberals averaged 34.9% support in December, a gain of 0.2 points over their performance in November.

The Conservatives picked up 0.4 points and averaged 32.4%, maintaining their highest levels of support since February 2013.

The Greens were up 0.2 points to 6.2% (the party has been at 6% for three consecutive months now), while the Bloc Québécois was at 4.3%. Another 2% of Canadians said they would vote for another party.

Considering that the biggest shift was worth only 1.4 points, December appears to have been a month of stability. But the aggregate masks the underlying numbers. In November, the Liberals were polled at between 34% and 36%, the Conservatives between 30% and 33%, and the NDP between 18% and 24%. Apart from the wider range for the New Democrats, this is a group of polls all saying the same thing.

December, however, has been much more volatile, with the Liberals between 32% and 41%, the Conservatives between 31% and 34%, and the NDP between 17% and 24%. The Conservative range was still tight, but the NDP's range grew a little and the Liberal range grew a lot, pointing towards anything from a big lead to a second-place finish. We should keep this in mind: while the aggregate suggests a stable trend line, the individual polls published in December are far less clear. 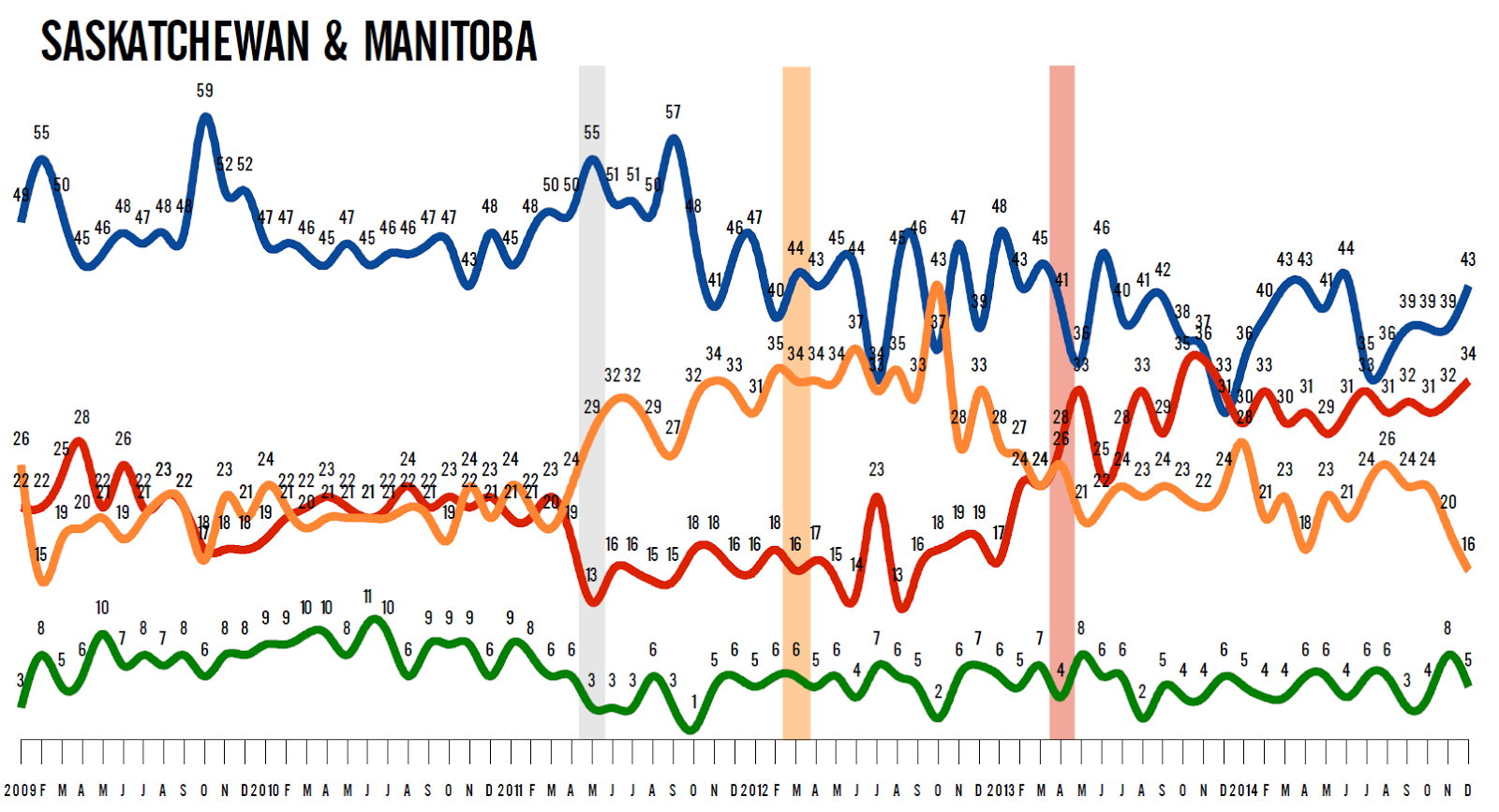 Ontario is the closest race in the country, with the Liberals narrowly ahead with 37.9% support in December against 37.4% for the Conservatives. That represented a drop of 0.2 points for the Liberals and a gain of 1.7 points for the Conservatives, their best since January 2013 and the third consecutive month of increase for the party. The NDP was down 2.9 points to 16%, their worst since February 2011, while the Greens were up 1.2 points to 6.5%.

With these levels of support, the Conservatives would likely win 139 seats, with 130 going to the Liberals and 65 to the New Democrats. The Greens and Bloc would each win two seats.

Since November, this represents a gain of six seats for the Conservatives, two for the Liberals, and one for the Bloc, with the NDP dropping nine.

The Conservatives picked up nine seats in Ontario and one in the Prairies, but dropped one in both Alberta and Atlantic Canada and two in British Columbia.

The Liberals gained two seats in Quebec and one each in the north, Alberta, and Atlantic Canada, but dropped three in Ontario.

The NDP dropped six seats in Ontario, three in Quebec, and one in the Prairies, but gained two in British Columbia.

So it remains a close race between the Liberals and Conservatives, all the more so in the context of who would come out ahead in the seat count. But it was a bad month for the New Democrats, who were below 17% in every region except Quebec and British Columbia.

Normally, one would expect lower NDP numbers to benefit the Liberals, but it hasn't worked out that way (the Liberals' widest lead in 2014 came when the NDP was at 22%, in 2013 it was when the party was at 23%). Perhaps the Liberals are picking up a lot of support from the NDP that is making up for the voters they have lost to the Conservatives, or perhaps some New Democrats are moving over to the Tories. No matter what is going on, it appears that low NDP numbers are not necessarily a boon to the Liberals.
Posted by Éric at 11:02:00 AM