Few Albertans are pleased that the bulk of the Wildrose opposition in the provincial legislature upped sticks and moved over to the governing benches. Danielle Smith, in particular, appears to have lost a great deal of standing within the minds of Albertans, and the turmoil within Wildrose itself has apparently crippled the party.

But unhappy they might be with what Smith and her former Wildrose MLAs did, they appear to grudgingly respect that Premier Jim Prentice pulled it off.

Over the holidays, two polls were published by the Calgary Herald on the political situation in Alberta, showing broadly similar results. 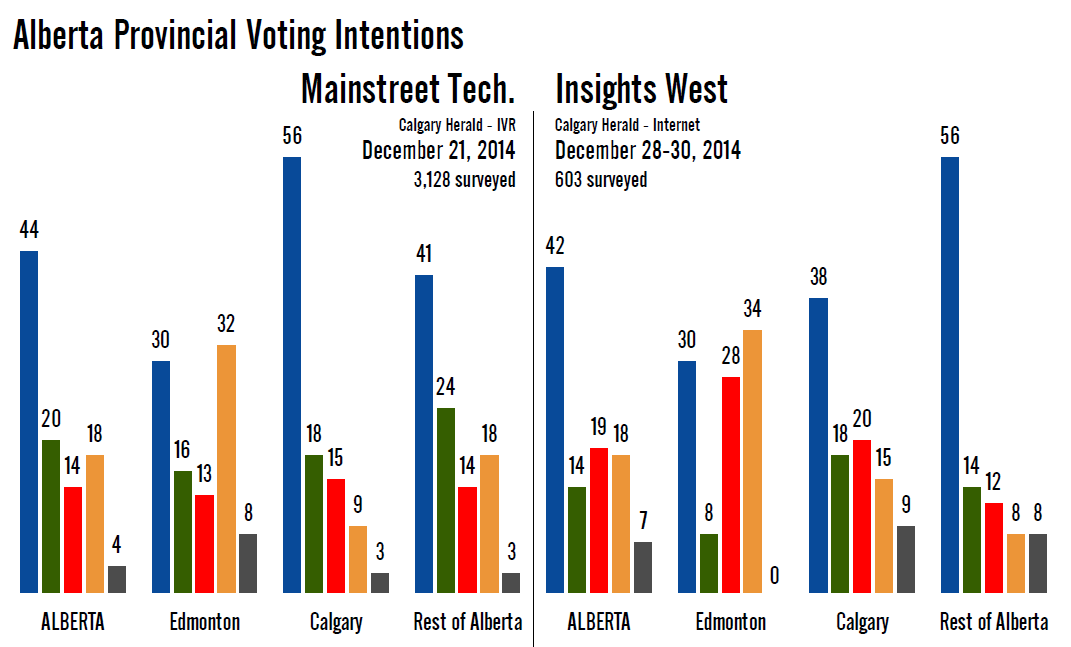 The earlier of the two polls, conducted by Mainstreet Technologies as the story was unfolding, gave the Progressive Conservatives 44% support. Wildrose trailed at length with 20%, while the New Democrats at 18% and the Liberals at 14% brought up the rear.

This was the first time that Mainstreet waded into the Alberta provincial scene.

But back into the field was also Insights West, which last polled between November 28 and December 1.

Insights West, polling after Christmas when the defection story would have been absorbed more fully, found the PCs at 42%, followed by the Liberals at 19%, the NDP at 18%, and Wildrose at just 14%. Considering the sample sizes and field dates, these results are virtually identical to Mainstreet's.

They do show that Wildrose may be dropping further, though. Already it is clear that the party has taken a tremendous hit in the polls. Insights West found the party down 15 points in less than a month, a huge slide that would be outside the margin of error of similarly sized probabilistic samples. The PCs were the main beneficiaries, up seven points, but the Liberals and NDP were also up slightly.

Mainstreet may not have have been in the field earlier, but in combination with Insights West it is clear that Wildrose has taken a huge tumble. A poll by Lethbridge College done in early October had roughly the same numbers as Insight West's November/December poll, suggesting that before the defections the Tories were leading with about 34% to 30% for Wildrose. The average support across these two new polls, by comparison, is 43% for the PCs and just 17% for Wildrose. That is a big swing.

Regionally, the two polls were in general agreement. In Edmonton, the race is close between the NDP (32% to 34%) and the Tories (30%), the wildcard being the strength of the Liberals. Insights West put them on 28%, while Mainstreet had them at just 13%.

In Calgary, both polls gave the Tories a comfortable lead but disagreed on the size of it: 56% to 18% for Wildrose according to Mainstreet, and 38% to 20% for the Liberals according to Insights West. There was similar disagreement in the rest of Alberta, where Insights West gave the Tories a big lead (56% to 14% for Wildrose) and Mainstreet a more modest one (41% to 24%). But the sample sizes, particularly for Insights West, are smaller at the regional level.

Going by the projections for each of these two polls, the Progressive Conservatives would win in a landslide, capturing between 68 and 69 seats. They would virtually sweep the entire province outside of Edmonton.

The New Democrats would have the best chance at forming the Official Opposition, with between nine and 11 seats - almost all of them coming from Edmonton.

The Liberals could tie the NDP in seats with between seven and nine, divided more evenly between the three regions of the province (note that the regional ranges above refer to the results for projections of the two individual polls, rather than high/low possibilities).

Wildrose, however, would risk being completely shut out of the legislature. Those MLAs who did not cross the floor risk losing their seats, whereas the party could have won 18 seats with the support levels in Insight West's previous poll before the defections.

The defections have proven incredibly unpopular. When they were just taking place, Mainstreet found that 59% of Albertans disapproved. Insights West, polling a week later, found a similar level of disapproval (62%) but that approval was at just 20%, compared to 31% for Mainstreet.

Danielle Smith wears this quite heavily, whereas Jim Prentice has come out of it looking better. At least, that is what the polls say.

When Insights West last asked the question at the end of November and in early December, 46% of Albertans said they approved of Prentice's work as premier. After the defections, that increased to 52%, the jump coming entirely from people who made up their minds about him.

(Mainstreet found Prentice's approval to be at 63%, with 26% disapproving).

That Smith's approval rating would drop so suddenly after the defections, while Prentice's would increase, suggests that the premier is not being blamed for agreeing to the plan. Accepting the opposition's surrender is quite a different thing from surrendering, it would seem. For now, the move looks like a good one for Prentice. But he may want to be wary of giving Smith too large a profile in his government.

And it does seem to be his government, at least according to voters. A majority of Albertans polled agreed that the PCs under Prentice are a different party than during the Ed Stelmach and Redford years. He has amazingly breathed new life into a government first elected in 1971.
Posted by Éric at 10:19:00 AM