With Godin retiring, is Acadie-Bathurst at play?

The New Democrats received some bad news last week when Yvon Godin announced he would not be seeking re-election this year. Godin has represented the riding of Acadie-Bathurst, in northeastern New Brunswick, since 1997.

Godin won the riding in 2011 with 69.7% of the vote. On the face of it, the New Democrats should have no concerns about retaining such a solidly NDP riding. But the question, which will only be answered when the next election is held, is just how much of a Godin riding Acadie-Bathurst has been.

The riding was not always so safe for Godin. When he first won it in 1997, on the heels of anger of changes to employment insurance by the Liberal government, Godin took the riding with 41% of the vote to 35% for the incumbent Liberals. In 2000, the margin increased to seven points.

But since 2004, the riding has been a very safe one. Only in 2006, when he took 49.9% of the vote, did Godin fail to secure a majority of ballots. In 2011, the Liberals - the traditional rival to the NDP in Acadie-Bathurst - dropped to just 14% support. The Conservatives finished second with 16%.

However, Godin really was a game-changer in 1997. In the 1984, 1988, and 1993 federal elections (and recall that in the 1980s the NDP was at a historic high under Ed Broadbent), the NDP captured just 5% to 6% of the vote in Acadie-Bathurst. Falling that far may not be in the cards for the party now that Godin is gone, but the NDP is suffering in New Brunswick. 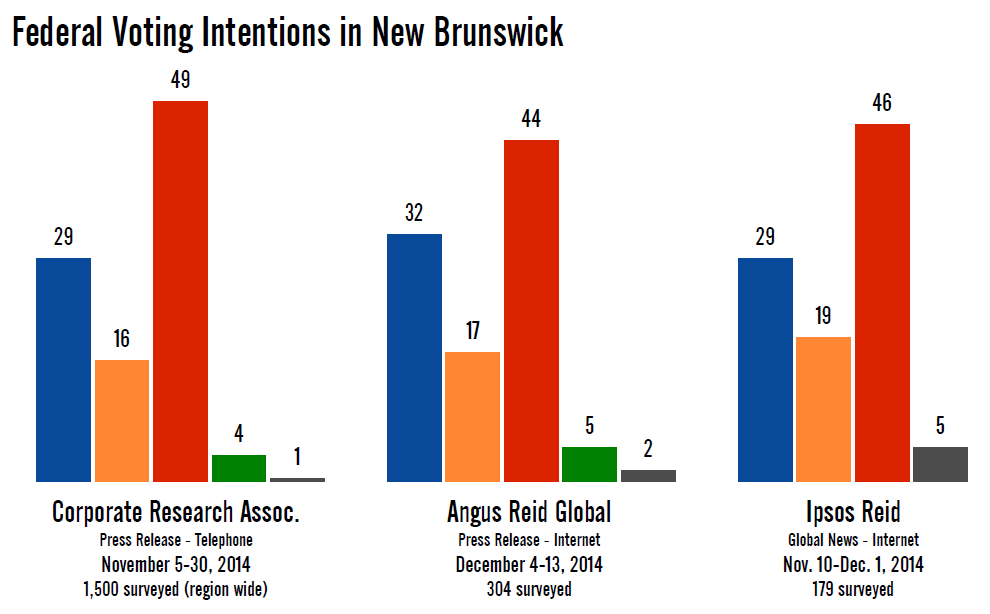 There have been three large-sample (by New Brunswick standards) polls since November, which give us a good look at the political situation in the province. And the three polls (by CRA, Angus Reid, and Ipsos Reid) are all in close agreement.

The Liberals were leading in New Brunswick in these polls with between 44% and 49% of the vote, representing a significant increase from the 22.6% the party captured in the 2011 election.

If we average these three polls out, we end up with the Liberals at around 46%, the Conservatives at 30%, and the New Democrats at 17%. Under these circumstances, how good are the NDP's chances in Acadie-Bathurst?

I've finished the projection model for the 2015 election, and I am just working on some final touches before launching in about two weeks. In the meantime, though, we can use it to take a closer look at what the polls are saying about what could happen in Acadie-Bathurst.

If we just go by the regional trends, which is what the model is designed to do, the riding should stay in NDP hands. The model gives the New Democrats between 44% and 50% of the vote without Godin on the ballot. The Liberals come in second with between 30% and 35%, while the Conservatives come in third with between 14% and 16%.

With Godin, the NDP would have been projected to win more easily, with between 48% and 55% of the vote against 28% to 32% for the Liberals.

But these New Brunswick polls suggest the race could be much closer, before we even take into consideration the drawing power of Godin.

If we swing the model according to the three New Brunswick polls only, the NDP drops to between 42% and 48% and the Liberals to between 33% and 38%. While that still points to an NDP victory, that is a much closer margin. The 'minimum/maximum' projection would make Acadie-Bathurst, under these circumstances, a potential Liberal pick-up.

Quantifying Godin's value is a much more difficult thing to do. If we look at the 1997 election when Godin first came along, the province-wide swing from 1993 to 1997 would have given the New Democrats about 22.4% of the vote in Acadie-Bathurst, rather than the 40.5% Godin actually captured. At the time, he was apparently worth about 20 points.

If we use that as our guide, and penalize the departure of Godin by a factor of 0.55 rather than the normal 0.9 penalty assigned to departing incumbents, the model would give the NDP between 33% and 37% of the vote, with the Liberals between 37% and 43%. In other words, the riding becomes a toss-up that heavily leans towards the Liberals.

Of course, that penalty is based on an election that occurred almost 18 years ago. But it does give an idea of the potential effect Godin's retirement will have on the results in Acadie-Bathurst. News reports did quote New Democrats recognizing that the formerly-secure riding is now one that will need to be fought over, so these calculations make some intuitive sense.

The party's chances in Acadie-Bathurst would be improved if it can find a similarly popular candidate to take Godin's place. But the NDP would also benefit from a boost in the Atlantic region as a whole. At about 17%, where the polls have them now, the party is on track for their worst result since the 2000 election.
Posted by Éric at 9:59:00 AM