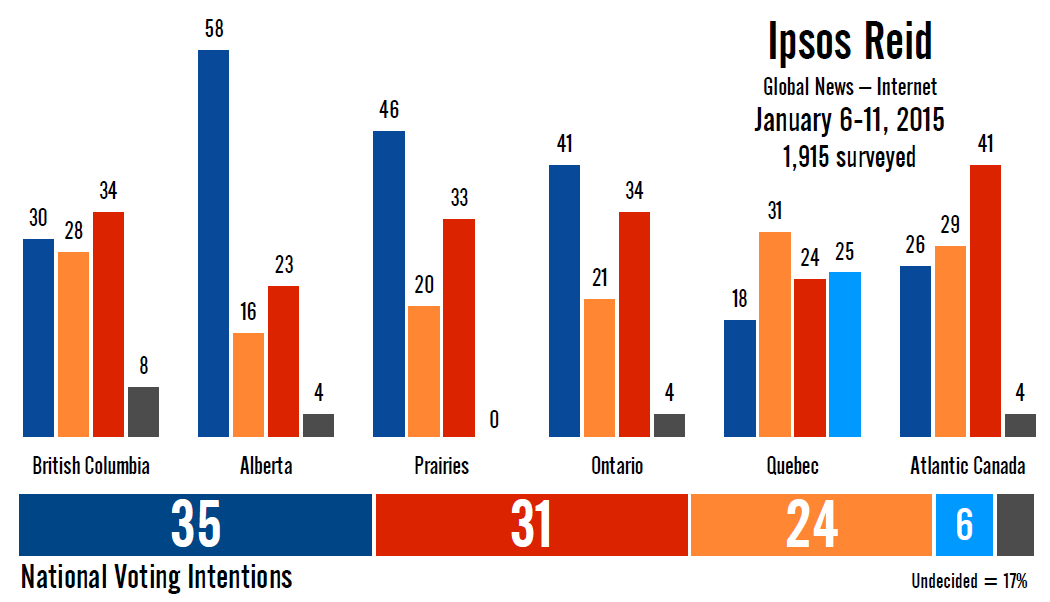 The poll in question was conducted by Ipsos Reid for Global News between January 6 and 11, interviewing 1,915 Canadians. The poll had an over-sample in Alberta (which would been corrected by weighting, of course), making the other regional samples more like a national poll of some 1,200 decided voters.

The Conservatives led in the poll with 35%, a gain of two points over Ipsos's previous survey of November 10-December 1. That moved them ahead of the Liberals, who dropped three points to 31%.

Only the decrease for the Liberals would be outside the margin of error of similarly sized probabilistic samples. But the Liberals have dropped in two consecutive Ipsos polls, from a high of 38% in September. The Conservatives have been trending upwards, up four points since then.

The New Democrats have been very stable, unchanged at 24% (they have been at either 23% or 24% in Ipsos's last six surveys).

The Bloc Québécois was up one point to 6%, while 4% supported other parties (including the Greens). The number of undecideds in the entire sample was 17%.

Is this a potential outlier poll? The Conservatives have not registered 35% support in any poll since February 2013, two months before Justin Trudeau became Liberal leader. That was also the last time the party had a four-point lead (over the NDP in this case).

The poll also had some surprising results on the gender split. It found the Conservatives ahead among men, at 37% to 33%, which is to be expected. But it also found the Conservatives five points ahead among women, with 34% to 29%. That is unusual. As my piece for the CBC explored this week, the Liberals have averaged a nine-point lead among women in polls done over the last month (and that was with an average lead of three points overall). Even if we do swing those averages by seven points to reflect Ipsos's overall lead, we still get nowhere close to a five-point advantage among women.

And the Conservatives have traditionally not had such uniform support between the sexes. By my estimate, there was a 10-point discrepancy between Conservative support among men and women in the 2011 election. For the Liberals to score worse among women than among men is also contrary to virtually every poll done in recent memory.

Ipsos did show a statistically significant drop in support among women, as the Liberals plummeted five points (and the Conservatives gained four) since their last survey.

The score for the Bloc Québécois in Quebec is also noteworthy, as the party was placed in second with 25% support. That is their best performance in any poll since March of last year, some 50 polls ago. But there has been nothing whatsoever happening in Quebec that could explain such a boost. The only statistically significant regional shift occurred in Quebec, with the Liberals dropping eight points to 24% - explaining much of their national decrease.

However, whenever a poll comes out that raises some eyebrows, the reaction should be caution and patience rather than skepticism. We'll have to wait and see if Ipsos is the first to capture something we need to keep an eye on. Certainly, the last few weeks have been tumultuous. What first looks like an outlier can be the first to capture a trend, like that CROP poll in the 2011 federal election that was the first to show the NDP in front in Quebec.

By my reckoning, the Conservatives would instead win about 145 seats, falling 25 short of a majority government. It is difficult to see how the Conservatives could pull a majority out of these numbers when, for instance, they trail in British Columbia and are still down so much in Atlantic Canada. A swing of about 12 points in favour of the Liberals in Ontario, compared to the 2011 vote, cannot be compensated for by 15 seats (in regions the Liberals would expect to make most of their gains).

The Liberals would win about 101 seats with these numbers, with the New Democrats taking 78 and the Bloc Québécois returning to official party status with 13 seats. They benefit greatly from vote splits, more than tripling their seat haul from 2011 despite a mere two-point gain in the popular vote.

I don't think people should get carried away with the idea of an impending Conservative majority just yet, but the Ipsos poll does suggest the Conservatives could be en route to improving their re-election chances by leaps and bounds. The next polls will be revealing.
Posted by Éric at 10:50:00 AM