The House of Commons adjourned for the summer yesterday, as MPs ran wildly back to the school buses dreaming of sprinklers, camp, and hot dogs. Politics on the Hill was starting to get uglier and stupider than usual, so they've all been sent home to cool their hot tempers - as is the case with the rest of us working stiffs. If our employers didn't all give us the summer off, the Stans-in-accounting of the world would be thrown out the windows by August.

It was a rather remarkable year in Ottawa, however. The last of the major party leaders (likely) to contest the 2015 election was named, and the government had to go through one of the most damaging periods any government has suffered since Gomery. How it will all shake out remains to be seen.

But the pace of change in the last 10 months has been extraordinary. The last time we have seen this amount of shifting support in one parliamentary year, an election had been held. 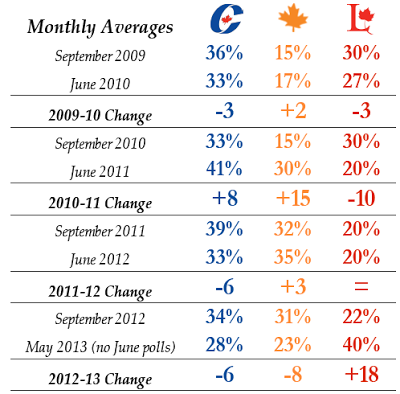 Unfortunately, there have yet to be any polls out in the month of June, so we have to look at where things were in May 2013. But the pace of change has been remarkable. The Conservatives lost six points over the year, while the NDP lost eight and the Liberals gained 18. That is the largest gain in support any party has recently experienced, even more than the 15 points the New Democrats gained between the fall of 2010 and the month after their electoral breakthrough of 2011.

For the Conservatives, the trends are not very positive. In 2011-12 they had dropped six points to around 33%, and had only gained one point during the summer. Then in 2012-13 they dropped another six points. Compared to where the party was two years ago, the Conservatives have lost 13 points. By comparison, the New Democrats are down only seven from June 2011, while the Liberals are up 20 points. This would seem to argue against the perception that the Liberals are making their gains primarily on the backs of the New Democrats. In fact, the Conservatives have suffered most from the arrival of Justin Trudeau, in addition to their own recent spate of stumbles.

But the Liberals shouldn't be counting their chickens already, as the 2010-11 season showed just how much an election can dramatically transform the political landscape. On the other hand, just because things shifted to such a considerable degree in 2011 does not mean that a similar change in fortunes should be expected in 2015. In the 2008 election, for example, the parties ended up generally where they were when the campaign began.

It will be interesting to see what kind of effect the summer will have on these numbers. The Liberals will be looking to maintain their support, while both the Conservatives and New Democrats desperately need to make up some ground. The drop in Conservative support could not have come at a worse time - as you can see on the chart above, the numbers hardly move over the summer. That means there is a good chance that the Conservatives will remain at or below 30% for another two or three months. There is still plenty of time, but that can only be said for so long.
Posted by Éric at 9:25:00 AM