We were spoiled a little with 10 polls in April. In May, only four polls (three of them national, one of them conducted in Quebec only) were released - perhaps due to some shyness after the B.C. election. Nevertheless, some 5,000 people were surveyed. The sample is not as robust as it could be, but the results point to continuing positive trends for the Liberal Party under Justin Trudeau. 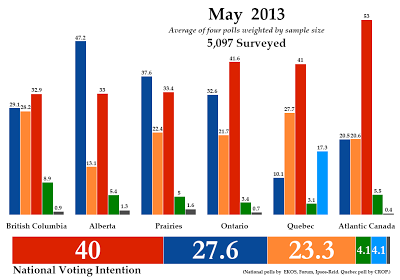 The Liberals averaged 40% in polls conducted in May, a gain of 6.6 points from their April averages. This is the highest Liberal number on record (going back to January 2009, as will be the case for the rest of this post) and the largest month-to-month gain by any party since the New Democrats jumped nine points between April and May 2011.

The Conservatives averaged 27.6% support, a drop of 2.6 points and the lowest number they have put up since at least the beginning of 2009. This is the fourth consecutive month of decline for the Conservatives, and the gap between themselves and the Liberals is the largest since the Tories had a 12-point lead over the Liberals in April 2011.

The New Democrats were down 0.5 points to 23.3%, their lowest since April 2011. They have been on the decline or stagnating for 11 consecutive months now (with the exception of a one-point uptick in January).

The Greens were down 1.5 points to 4.1%, putting them tied with the Bloc Québécois (down 1.4 points). Support for other parties averaged 1%.

Those are some pretty striking numbers, after a month of striking numbers in April. The trends all point to Liberal gains primarily at the expense of the Conservatives. EKOS, Forum, and Ipsos-Reid were all in the field in April, and the change from those polls is clear.

The New Democrats have shown a small gain from those April polls, however, in the unweighted average. But the April averages also included polls from other firms. 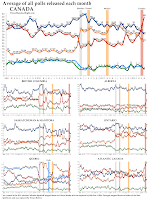 The Liberals made gains in all six regions of the country, while the Conservatives decreased in support from coast to coast.

In Ontario, the Liberals averaged 41.6% support, a gain of 5.8 points since April and their best result since April 2009. The Liberals have gained 16 points in Ontario since January. The Conservatives dropped 2.7 points to 32.6%, their lowest on record. The New Democrats were down 0.6 points to 21.7%, while the Greens were down 1.9 points to 3.4%.

The Liberals averaged 41% support in Quebec, their best on record. That represented a gain of 5.2 points since April and 17 points since March. The New Democrats had a small increase of 1.3 points to 27.7%, while the Bloc Québécois was down 4.6 points to 17.3%. That is their lowest number since October 2011. The Conservatives were down 0.7 points to 10.1%, their lowest on record, while the Greens were down 1.1 points to 3.1%.

The results in Alberta are probably anomalous due to an unusual result in Forum's polling. But nevertheless, the Conservatives fell 8.3 points to 47.2%, their lowest on record, while the Liberals were up 11.3 points to 33%, their best. While the size of the gain was probably inflated, the Liberals did have their fourth consecutive month of increase in Alberta. The New Democrats were down 0.3 points to 13.1%, while the Greens were down 1.5 points to 5.4%.

With these levels of support, and on the 338-seat map, the Liberals would win 152 seats. The Conservatives would take 109 seats, the New Democrats would win 74, the Bloc would hold onto two, and the Greens would retain their one.

The seven seats in Alberta may seem unusual - and they are. But this is what happens when the Liberals are at 33% in the province. Will they actually get 33% in Alberta? Probably not, but this is what that number gives them. And, in any case, it doesn't change much if you give all seven of those back to the Conservatives.

The Liberals made their biggest seat gain in Ontario, jumping 13 seats from April - all at the expense of the Tories. When the two parties are neck and neck in the province, it is to the Conservatives' advantage. But with a nine-point lead, the Liberals are able to win the majority of Ontario's seats.

Quebec is still a puzzle. The Liberals have traditionally not put up good numbers outside of Montreal, and that was particularly the case in the last election. So when the Liberals triple their support in the province, they do not win a lot of seats outside of the Montreal area in the model when the base is 10% or less. This might inflate the NDP's potential seat wins - unless the party is capable of keeping the Liberals down below 30% in most of the province's majority-francophone ridings. 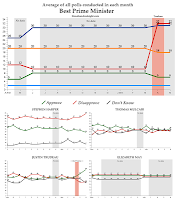 There were no new numbers on the Best Prime Minister question in May, but there were some approval ratings. Stephen Harper dipped below 30% for the first time, while Trudeau flirted with almost 50% approval.

The Trudeau honeymoon continues, undoubtedly aided a great deal by the plethora of problems the Conservatives are going through right now. If the Conservatives are to make it back, they have a lot of work to do. The last time they trailed in the polls - behind the NDP in mid-2012 - the party was still in a very strong position in Alberta, the Prairies, Ontario, and Atlantic Canada. They were even holding steady in Quebec. And the last time the Tories trailed the Liberals in the polls - in the spring of 2009 - they were still comfortably ahead in the West and within spitting distance of the Liberals in Ontario and Atlantic Canada.

The degree to which they trail Trudeau's Liberals right now is much larger than it was when they trailed Thomas Mulcair, Michael Ignatieff, and Stéphane Dion in the past. To find the last time the Conservatives trailed anyone by 12 points in national polls, you have to go back to 2005 when the party was sitting on the opposition benches. The numbers can be waved off as being two years from the next election, but it would take willful blindness not to recognize that the Conservatives are currently in the deepest hole they have found themselves in since coming to power more than seven years ago.
Posted by Éric at 10:17:00 AM