The resignation of Bob Rae sets up another federal by-election to go along with the one that will be taking place in Denis Coderre's old riding of Bourassa. And just like that Montreal riding, Toronto Centre is likely to stay within the Liberal fold.

Toronto Centre has been a Liberal riding since 1993, split between Bill Graham and Bob Rae, who won the riding in a 2008 by-election. At the provincial level, Toronto Centre has voted in an Ontario Liberal since the riding was matched-up with the federal boundaries in 1999. And over that time, Liberals George Smitherman and Glen Murray split its representation.

It means Toronto Centre has a long history of voting Liberal and being represented by an important figure. Graham was a cabinet minister and, like Rae, an interim party leader between Paul Martin and Stéphane Dion. Smitherman and Murray have both been cabinet ministers in the Ontario Liberal government.

It being a downtown Toronto riding and - locals would argue, I'm sure - the centre of Canada's universe, it seems likely that some big names will be on the ballot when the by-election is called. Seamus O'Regan and Smitherman's names have already been bandied about. And with the Liberals soaring high in the polls under their new leader, it seems unlikely that the party will be short of quality candidates.

The New Democrats can't be completely ruled out, however. Rae's retirement from the House of Commons was expected, and the NDP was getting ready. However, the NDP would have had a much better chance to win the riding back when the party was leading in the polls last year. As the New Democrats have since dropped below where they were in 2011, and the Liberals have surged ahead, it follows that Toronto Centre is probably going to remain a safe Liberal riding. 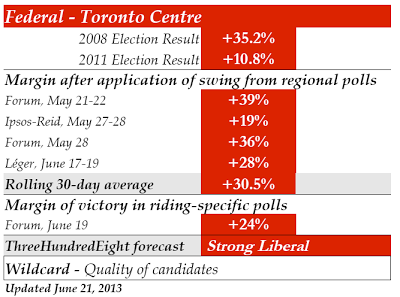 A poll by Forum Research (June 19, surveying 926 residents of the riding) concurs, putting the Liberals at 49% to 25% for the NDP and 20% for the Conservatives. In other words, the swing that we have seen province-wide (Liberals up, Conservatives and NDP down) has also occurred in Toronto Centre.

But a by-election can be unpredictable. Justin Trudeau has promised open nominations so it is possible that someone other than O'Regan, Smitherman or another well-known candidate could win the nomination, and the process itself could tear the local party apart (though this is less likely to happen when a party is doing well). If the NDP finds a great candidate, they can certainly make a run for the riding. It fits their profile and the party did very well in parts of Toronto Centre in 2011. If the by-election is called later rather than sooner, there will be plenty of time for events, dear boy, to intervene.

Nevertheless, there is every reason to believe that Toronto Centre should remain safely and comfortably in Liberals hands.

There have been updates to the By-Election Barometer for the federal riding of Bourassa and the provincial ridings of Westside-Kelowna and Ottawa South. The new Léger national poll was added to the rolling average for Bourassa, changing little, while the Forum poll for Westside-Kelowna was corrected (how it was originally reported in the National Post was wrong). The Forum poll for Ottawa South was also added. In part due to the three-point edge the survey gave to the Tories, the forecast for the riding has been downgraded from Strong Liberal to Likely Liberal.

And that's all folks!

I'll be taking a bit of a break next week, so don't expect any updates until after Canada Day. Have a good one!
Posted by Éric at 10:41:00 AM