Dalton McGuinty announced his resignation as Premier of Ontario in September 2012, and bowed out officially when he was replaced by Kathleen Wynne earlier this year. At the time, he had said he would stay on as an MPP until the next election. But with the pressure building on the gas plant issue, McGuinty announced last week that he would be resigning his seat of Ottawa South, which he had held since 1990.

Ottawa South has been in Liberal hands for 26 years since 1987, when McGuinty's father first won the riding. It has been a safe seat over that time, with McGuinty's support remaining remarkably steady. 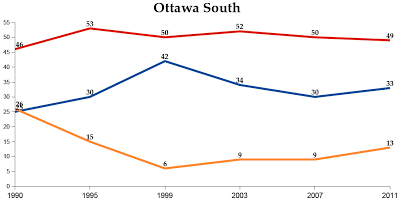 With the exception of the 1999 election, there has been very little change in both Liberal and Progressive Conservative support in this riding in the six elections contested by the out-going former Liberal leader.

But prior to 1987, Ottawa South was a relative safe Tory seat, having voted for the party in every election since its creation in the 1920s. However, the riding has under-gone some major demographic changes over that time. The political make-up of Ottawa South of over a generation ago might have little to do with voting patterns today.

The Progressive Conservatives took 42% of the vote in eastern Ontario in the 2011 provincial election, compared to the 37% captured by the Liberals and the 17% of the New Democrats. When the Liberals were tanking in the weeks before McGuinty announced his intentions to step down as premier, the Liberals had fallen to the mid-20s in support in the region, and behind the New Democrats. The PCs had surged ahead to around 50% support. Had a by-election occurred at that time, Ottawa South would have been ripe for the Tory picking. 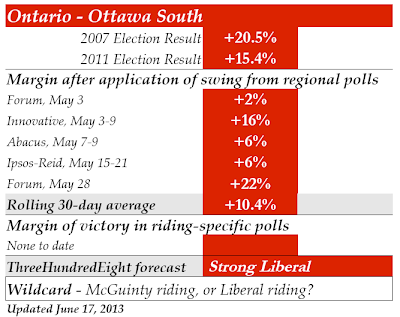 But the Ontario Liberals' poll numbers have improved under Wynne. Most polls now put the Liberals back over 30% in eastern Ontario, with the last three polls from Abacus Data, Ipsos-Reid, and Forum Research putting the Liberals at 33%, 32%, and 42% respectively in the region. The Tories have dropped back to around the 42% they took in the last election. The New Democrats are also back down to the high-teens, and so should not be a factor in this by-election (except potentially as a spoiler).

Generally, with the Tories holding steady and the Liberals down a little from 2011, this should make Ottawa South a closer riding. With the Liberals' lack of an incumbent candidate, that also drops them a little more. That brings the margin down to potentially single digits. However, the Liberals should be able to hold the riding due to their long history in it and the decent support levels the party has been showing under Wynne.

But the wildcard in this by-election is the McGuinty factor. No one could deny that the riding is dominated by the McGuinty name. In addition to the family holding the riding since 1987, David McGuinty, Dalton's brother, has been the federal MP for Ottawa South since 2004 and, despite the poor showing for the federal Liberals in the 2011 election, still won the riding by 11 points.

However, with one of the two McGuintys gone, will voters in the riding still vote for the Ontario Liberals? Was this riding a McGuinty riding or a Liberal riding? Are residents in the riding upset over the problems that led to McGuinty's departure? The by-election will tell us, but until then the forecast is for Ottawa South to be  a Strong Liberal riding.

A by-election will be held on July 10 in the British Columbia riding of Westside-Kelowna, in an attempt for B.C. Liberal leader Christy Clark to get into the legislature after she lost her seat in May's provincial election. 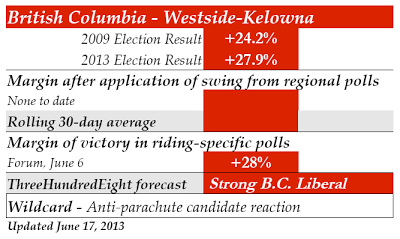 There isn't a lot of data to go on here, as there haven't been any polls since the election on how British Columbians would vote today. But Ben Stewart won the riding easily in the last two elections, taking 58% of the vote to 31% for the NDP's candidate last month. The riding and its predecessors have been strongly centre-right for decades.

A poll by Forum Research (interviewing 350 people on June 6) found that support had not changed even with the replacement of Stewart by Clark, with 58% saying they'd vote for Clark, 30% for the NDP, and "less than 10%" for the Conservative candidate (the party took 11% in the last election). This would seem to suggest that voters in the riding will be sticking with their choices.

The only potential for trouble is if there is a reaction against parachuting Clark into the riding. It is unlikely, however, considering the history of the riding and that the Liberals are the government. It makes Westside-Kelowna a Strong B.C. Liberal riding.
Posted by Éric at 9:38:00 AM