Provincial Liberals up throughout Atlantic Canada

Earlier this week, the Corporate Research Associates released their Atlantic Quarterly polls for all four provinces on the East Coast. The results show gains by the provincial Liberal parties throughout the region, with mixed results for the New Democrats and Progressive Conservatives. The polls also show that, with the exception of Prince Edward Island, incumbents are in trouble in every province. 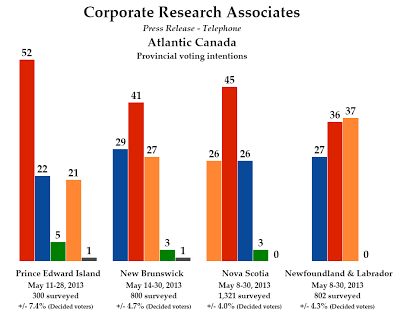 Before we get to the numbers, a few notes on methodology. CRA uses traditional live-callers to put together their polls. They tend to have very large  proportions of undecideds, ranging in these four provinces between 35% and 55%. This means the sample sizes for decided voters tend to be smaller with appropriately larger margins of error.

Also, CRA releases no crosstabs or demographic data, but clients subscribe to the Atlantic Quarterly and so they receive more data than the unwashed masses. It would be preferable if CRA released all of their data relating to political questions, as they are picked up by media throughout the region.

Nova Scotia is the province next slated to go to the polls (either this fall or before June 2014), and the New Democrats are in trouble there. They have dropped six points since CRA's last poll from November, a statistically significant decrease that has put them in a tie with the Progressive Conservatives at 26%. The Liberals were up to 45%, though their gain was just within the margin of error for their results. These are recent record highs and lows for both the Liberals and NDP.

There was a big increase in undecideds, however, from 48% to 55%. That makes the election, whenever it is called, very important. Many voters are still on the fence. Stephen McNeil was the favourite choice for premier by 31%, followed by Darrell Dexter and Jamie Baillie at 18%. Satisfaction with the government stood at 40% to 49% dissatisfaction.

New Brunswick will hold its next election in the fall of 2014, and here too the incumbent government is in trouble. The Tories are down to 29%, while the Liberals were up to 41% under new leader Brian Gallant. The New Democrats were up to 27%. These are recent record highs (Liberals and NDP) and lows (PCs) for all three parties, though none of the shifts are outside the margins of error. Fully 45% of respondents were undecided, unchanged from February-March.

Gallant topped the premier question with 31%, followed by David Alward at 20% and Dominic Cardy of the NDP at 17%. Satisfaction stood at 38%, while dissatisfaction was up to 51%. Satisfaction with the government has been relatively more steady, however, than the PCs' support levels.

Prince Edward Island isn't heading to the polls until 2015. But Robert Ghiz is quite comfortably ahead, with 52% support to 26% for the Progressive Conservatives and 21% for the New Democrats. Here again, the shifts aren't statistically significant, and 41% were undecided.

Ghiz was at 38% for the best person to be premier, followed by Mike Redmond at 15% and Steven Myers at 11%. Satisfaction with the government was at 45%, with dissatisfaction at 51%.

Finally, and most interestingly, is Newfoundland and Labrador. They are also only holding their next election in 2015, but the political landscape is changing. The New Democrats retained a narrow lead with 37%, but the Liberals and Progressive Conservatives swapped places. The Liberals picked up 14 points since February-March and placed a close second with 36%, with the Tories down 11 points to 27%. Worth noting, however, is that the number of undecideds increased by nine points to 35%.

The NDP is still at an all-time high (though slightly down from February-March's numbers), while the Liberals are polling better than they have in quite a while. For the Progressive Conservatives, 27% is a far cry from the 70% (and more) support they were polling at before the 2011 election.

Premier Kathy Dunderdale ranked third among the leaders with 21% choosing her as the best person to be premier, a drop of 11 points. Dwight Ball of the Liberals (interim leader but a candidate to take over) was up seven points to 24%, while Lorraine Michael remained well ahead with 36%.

Satisfaction with the government dropped 13 points to only 32%, while dissatisfaction was up 11 points to 63%. These are astounding numbers: 26% were 'completely dissatisfied', while a year ago that was only at 9%.

In terms of seats, the incumbent governments would be defeated in New Brunswick, Nova Scotia, and Newfoundland and Labrador, while the Liberals in Prince Edward Island are safe.
In New Brunswick, Gallant's Liberals would win 34 seats and form a majority government, with Alward's Tories pushed to the opposition benches with 13 seats. The New Democrats would win eight.

McNeil's Liberals would win a majority government of 32 seats, with Dexter's NDP winning 11 and the Tories the remaining eight.

The Liberals would sweep Prince Edward Island, winning all 27 seats in the province.

In Newfoundland and Labrador, the Progressive Conservatives would be reduced to only seven seats but hold the balance of power in a minority legislature. The New Democrats would win the plurality of seats with 21, taking 13 of the 14 seats in the St. John's Region. The Liberals would win 20 seats, 15 of them in Newfoundland west of the Avalon and Burin peninsulas. How this arrangement would work out is anyone's guess.

Though the samples outside of Newfoundland and Labrador were two small to decisively determine that the Liberals were making real gains, the trends are quite clear. Aside from a small one-point uptick in PEI, the Liberals gained six points or more throughout the region. They are under-going a bit of renewal, with a leadership race underway in Newfoundland and Labrador and Gallant having been named the leader of the NB Liberals last year. Plus, there is the Justin Trudeau factor. It can't be ignored, considering how well the federal party is polling in Atlantic Canada.

The Progressive Conservatives had less clear results, with a big drop in Newfoundland and Labrador, a modest one in New Brunswick, a modest gain in Nova Scotia, and a larger one in Prince Edward Island. The trends are a bit clearer for the New Democrats, who were down everywhere but New Brunswick, where they only gained a point. This is, however, much less tied to the federal scene as the provincial Tories are polling better than their federal counterparts. But just like at the federal level, the region appears to be in major flux.
Posted by Éric at 9:48:00 AM