Late last week, EKOS Research released their most recent federal polling results via iPolitics, showing that the Liberals have been losing support since shortly after Justin Trudeau's leadership victory. However, neither the Conservatives nor the New Democrats have really been able to take advantage. 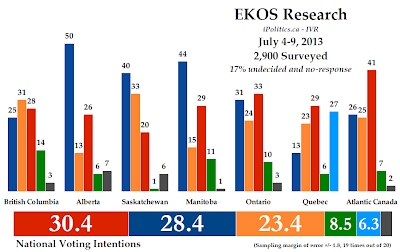 EKOS was last in the field on May 22-26 (though that poll was not released until last week as well), and since then the Liberals dropped 4.3 points to 30.4%. That drop is outside the margin of error, and part of a larger trend as the party had been at 38.6% in EKOS's Apr. 30-May 2 poll.

But the Conservatives continue to tread water well below where they need to be. They were up 2.1 points to 28.4%, but that is not a statistically significant amount of change and is only 2.2 points up from where EKOS had them in their earlier poll. It is a similar story for the NDP, who were up 2.5 points to 23.4% support, but that is after having dropped in EKOS's poll from the end of May. The party is still below where they were at the end of April.

The number of undecideds and non-responses was 17%, mostly unchanged from EKOS's previous poll. The Greens had 8.5% support, while the Bloc Québécois was at 6.3% and support for other parties at 3.1%.

A note about EKOS: they have a good disclosure policy, with their reports being very complete and full of numbers. It would be best if they could also include their unweighted sample sizes in their reports, but the firm is not shy to share this information when asked and Frank Graves is always willing to talk about methodology in great detail.

These numbers from EKOS are interesting, as the firm has had a tendency in the past to low-ball the three major parties. But that has not been the case in their last two polls, with the Liberals at 39% and 35%. Their two previous polls had the leading party at less than 30%, and you have to go back to March 2012 to find an EKOS poll where the leading party had more than 33% support. So, this suggests that EKOS is recording a real dip in Liberal support, something that other firms have been hinting at. It is too early to definitively say that the honeymoon is over for Trudeau, but it is certainly not too early to ask the question.

Regionally, support for the parties was mostly wobbling within the margin of error and similar to what other polls have been showing. But the Liberals did lose significantly in Ontario (down 5.5 points to 32.7%) and Quebec (down 6.3 points to 29%). Elsewhere, the New Democrats were narrowly ahead in British Columbia (which has become a real three-way race in the last few months) while the Tories were in front in Alberta and the Prairie provinces. The Liberals were still ahead in Atlantic Canada, but have moved away from the 50% they were enjoying in April-May.

Of interest in this poll is the support among immigrant Canadians. Jason Kenney is credited with having done a great deal of good work for the Conservatives among these voters, and he has retained some responsibility in this domain despite his change of ministry. The poll suggests the Conservatives still have the advantage among this demographic, with 35% to 33% support for the Liberals. But they would prefer to have a wider edge than that.

On turnout, the Liberals would likely do better than the Conservatives as they were ahead among voters 45 and older.

In terms of seats, the Conservatives would still narrowly beat the Liberals due to their advantage in the West and in rural Ontario, taking 126 to 112 for the Liberals. The New Democrats would hold 60 seats, buoyed in large part by their strong B.C. numbers, while the Bloc Québécois would take advantage of the weakness of the NDP in Quebec and win 38 seats. The Greens would take two.

The numbers in Quebec are particularly interesting. Though the Liberals double their support, they aren't in a strong position to win a large number of seats due to their relative weakness outside of Montreal and a few select areas of the province. With the NDP dropping so steeply, the small gain the Bloc has made in this poll (worth only three points from their 2011 showing) pays big dividends. In fact, a huge proportion of Quebec's seats are won by a tiny proportion of the vote (35% or less), with only some five to 10 points separating the Bloc, NDP, and Liberals. It means that it would not take much to radically transform the numbers in the province.

In the B.C. election, the forecast did not actually get a huge number of seats wrong (in fact, of all the prognosticators ThreeHundredEight got the most correct), but the ones that were wrong went all in the same direction, magnifying the error. But on average, of those that were wrong the probability forecast averaged about 68% confidence that the right call was being made (not exactly high). That translates to a margin of about nine to ten points. So if we apply that range to the federal forecast, we see that Quebec is the real battleground.

That is because with a range of just under 10 points, the number of seats each of the parties could win in Quebec is wide enough to drive a truck through: 11-50 seats for the Bloc Québécois, 20-38 seats for the Liberals, 0-37 seats for the New Democrats, and 5-12 seats for the Conservatives. No other province showed that wide a variety of potential outcomes, suggesting that the next election could be won or lost in Quebec. The Conservatives are powerless in that regard, and need to hope that Quebec is split three ways instead of plumping for one party as the province did in 2011. 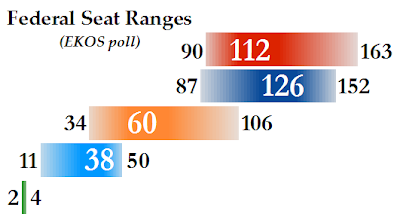 These ranges show that, while the Liberals have a less efficient vote than the Conservatives in the precise projection, they have greater potential. The Liberals could win between 90 and 163 seats with these numbers from EKOS (taking into account the potential for EKOS's numbers to be wrong) while the Conservatives could win between 87 and 152 seats. That likely means either official opposition or minority government for either party, but neither is at the magic 169 needed to form a majority government in the new House.

The New Democrats could win between 34 and 106 seats, which means that if the three parties end up very close in the popular vote the NDP does have the potential (tiny as it is) to come ahead in the seat count. They also have the potential to return to fourth-party status behind the Bloc Québécois, who could win as many as 50 seats and return to prominence or fall just short of official party status in the House of Commons.

The Greens could win between two and four seats, the extra two being very unlikely wins in Ontario and the North.

This gives a good indication of where the parties stand: the race is very much between the Liberals and Conservatives but the NDP is still in the running, while depending on how things go for the other parties the Bloc can remain on the fringes or return to influence. Quebec is the biggest battleground, while the Conservatives' fate lies in Ontario. Federal politics in Canada remain at a crossroads - and likely will continue to be straight through to 2015.
Posted by Éric at 10:24:00 AM