A deeper look at polls from Environics and Ipsos-Reid

The two most recent federal polls unleashed on the world came from Ipsos-Reid and Environics Research Group. Both polls were taken at the end of June, which means that they are now a little dated. So instead of looking at the overall numbers, let's take a look at some of the numbers that weren't included in their original releases. 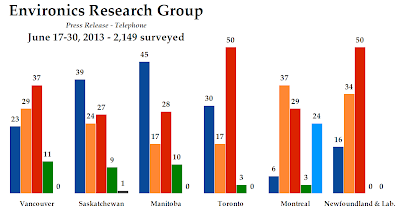 First, the Environics poll. In addition to the usual regional breakdown that Environics includes in its release, the polling firm also records 'sub-regional' support and was kind enough to pass those numbers along.

The last time I had these numbers was in June 2012, at the height of Thomas Mulcair's honeymoon with Canadians. Compared to those numbers, the New Democrats have fallen 11 points in Environics's polling, while the Conservatives have been down five and the Liberals gained 15.

At the sub-regional level, however, we can see where some of these gains and losses have disproportionately taken place. Compared to the shift in national support, the Liberals have surged disproportionately in Toronto (Environics defines Vancouver, Toronto, and Montreal as their CMAs) by 22 points to 50% support. They were up 28 points, also to 50%, in Newfoundland and Labrador. Both of those shifts in support are well outside the margin of error, even for the small samples used for these regions.

It should be noted, however, that Environics also did a poll of 1,000 Newfoundlanders and Labradorians at around the same time as their national June 2012 poll, and compared to those numbers the Liberals were up only 16 points.

Liberal support grew by about the same amount as it did nationally in Saskatchewan (14 points), Montreal (13 points), and Vancouver (13 points), but only by 11 points in Manitoba.

For the Conservatives, their support fell disproportionately in Vancouver (10 points) and Saskatchewan (8 points), while it maintained itself better in Newfoundland and Labrador (down two points), Toronto (three points), and Montreal (two points). But in these areas, the Conservatives did not have much further to drop.

And the New Democrats suffered most in Newfoundland and Labrador (down 25 points and losing the lead), Montreal (down 15 points), and Toronto (14 points), while they fell only four points in Saskatchewan. They were also down 12 points in Vancouver and eight points in Manitoba.

The extra bit of precision for the Prairie provinces does have an effect, as using the overall Prairie numbers to project seats short-changes the NDP by two (giving one extra seat to the Liberals and Conservatives).

For the Ipsos-Reid poll, the firm did something different in trying to assess likelihood of voting. They found that, among the general population, the Liberals led with 33% to 30% for the Conservatives and 28% for the New Democrats. The regional numbers would deliver seats in the following proportions:

The three parties would be almost even, with 121 for the Conservatives, 112 for the Liberals, and 102 for the New Democrats, with the Bloc and Greens taking three seats together.

The Conservatives pull more seats from fewer votes because of their advantage in the western provinces and in Ontario. A tie there (34% to 34%) is more advantageous for the Tories. But the party would only win five seats east of the Ottawa River.

When Ipsos-Reid looked at only those who were most committed to vote (about 60% of the sample, interestingly enough considering that is a very plausible turnout number), the Liberals were boosted to 35%, with the Tories dropping to 29% and the NDP to 26%. For those wondering, that is counter to what my simple turnout model would have given for this poll (34% CPC to 33% LPC and 24% NDP). With Ipsos's regional numbers for likely voters (which the firm was also nice enough to pass along), the Liberals move ahead in seats:

Despite the difference between Ipsos-Reid's total sample and likely voters being relatively marginal (no party moved by more than two points nationally), the consequences are far more important. In the first scenario, the Conservatives might actually try their luck at a minority government. They would likely be defeated by the Liberals and NDP, but if those two parties did decide to work together they would each need to be given almost equal heft in a coalition.

In the second scenario, the Conservatives likely would not try to form a minority government and instead the Liberals would try their hand at it (yes, I know that the Tories could try to continue to govern but I'm assuming they wouldn't, as Jean Charest did in Quebec). If they did work with the NDP, they would be able to call more of the shots holding 57% of the coalition's seats instead of 52%, and finishing much further ahead in the popular vote (nine points instead of five).

This emphasizes just how important likely voter numbers will be in the next election. I am happy to see that more firms are starting to think about how they will go about this in 2015.
Posted by Éric at 9:43:00 AM