After a much needed break, it is time to get back to work and take a look at the polls that were missed while I was away. There were some interesting results, but for now let's look at what the current aggregates are showing. 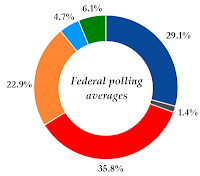 The Liberals continue to lead nationwide, with 35.8% support to 29.1% for the Conservatives and 22.9% for the New Democrats. But that is down from the recent highs that the Liberals have been experiencing, where the aggregate put them at 39% or even 40% support. Nevertheless, the lead they hold over the Conservatives is significant and  the New Democrats still appear to be treading water.

The Liberals are ahead by sizable margins in Ontario, Quebec, and Atlantic Canada, and are in front by a few tenths of a percentage point in British Columbia. That is the tightest race at the moment, with the Liberals at 29.9%, the Conservatives at 29.4%, and the NDP at 27.8%. The Greens are strongest there at 11.8%.

But the government is still well in front in Alberta (though they are no longer closer to 60% than 50% support) and in the Prairies, where their vote has probably been the sturdiest. 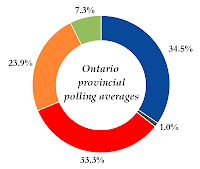 At the provincial level in Ontario, Kathleen Wynne's Liberals have fallen behind the Progressive Conservatives. However, the margin is minuscule: 34.5% for the PCs and 33.3% for the OLP. The NDP is still polling above their election haul of 2011, with 23.9% support.

It is difficult to determine whether there is any real cause for concern here for the Liberals. They have fallen 2.2 points since the last update at the end of May, but the PCs have hardly budged (up 0.3 points) and the NDP actually dropped 0.4 points. Instead, the provincial Greens made the gain (from 5.1% to 7.3%), one that is almost certainly a statistical anomaly. The best that can be said right now is that the OLP and PCs are in a very close race. 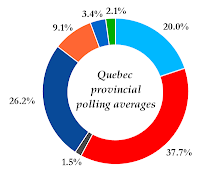 The race in Quebec is much more lop-sided, however. The opposition Liberals under Philippe Couillard have moved ahead dramatically, averaging 37.7% support. The Parti Québécois is down to 26.2%, though that is slightly better than where they stood a few weeks ago (primarily due to their lower results in CROP's polling).

The Coalition Avenir Québec continues to be unable to make up any ground, and has actually dropped to only 20% support. With Couillard at the helm of the PLQ, the usefulness of François Legault's party seems to have diminished in the eyes of many voters who were tired of both the PQ and Jean Charest's version of the Liberal Party.

Among the minnows, Québec Solidaire is best placed with 9.1% support, while Option Nationale was at 3.4% before Jean-Martin Aussant's resignation as leader. Where that small party will go from here remains to be seen.

During the summer months, political polling tends to stagnate. So, we should probably expect the parties in Ontario, Quebec, and at the federal level to be roughly where they are today in September. But two months is still a long time, even if most Canadians have checked out. Considering the stakes in Ontario and Quebec, where Wynne and Marois have flimsy minorities, and the historical lows for Stephen Harper's government, these two months could be important.
Posted by Éric at 11:42:00 AM