Turnout and the Ontario by-elections

UPDATE: New polls from Campaign Research and Forum Research were released on July 31, and they have been used to update the By-Election Barometer. In terms of the turnout model as discussed below, applying it to Forum's latest polls changes the look of them rather significantly.

A few weeks ago, I discussed how a simple turnout model was able to significantly increase the accuracy of polls in some recent elections. Depressingly so - the model requires ignoring the voting intentions of those under the age of 35. But nevertheless the model worked. Can it be applied to the Ontario by-elections that will be taking place on Thursday?

The first question to ask, however, is whether the turnout adjustment should be applied. Earlier this month, I took a detailed look at Forum Research's by-election track record and found it to be decent. If we take those same polls and apply the turnout model, we see that it turns these decent polls into very good ones. (You will need to click on the chart in order to magnify it.) 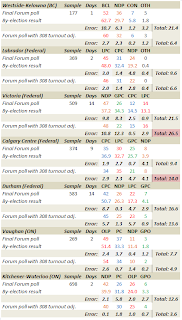 In only two of the seven by-elections Forum has recently polled would the turnout model have made the poll worse. And these were the by-election polls for Victoria (out of the field 14 days before the election) and Calgary Centre (out of the field nine days before the election). In every other case, the turnout model would have improved the polls. On average, the model reduced the amount of error by 3.3 points. If we exclude the three polls taken more than a week before the vote was held, the turnout model improved the polls by an average of 7.5 points. That is rather significant. The polls in Westside-Kelowna and Kitchener-Waterloo, for instance, would have been dramatically improved.

Now that it is quite clear that the turnout model can improve polls, let's apply it to the latest set of by-election polls Forum has recently released.

In Etobicoke-Lakeshore, the seven-point deficit that Peter Milczyn was last recorded to have against Doug Holyday is increased to 11 points. Based on the amount of error in Forum's by-election polls, a margin of seven points was just about the limit of what you would consider a toss-up race. At 11 points, the margin seems insurmountable. It makes Etobicoke-Lakeshore, already leaning towards the Progressive Conservatives, a much more solid bet to go Tory.

London West is also made more solidly PC, as it improves Ali Chahbar's 36% to 40%, giving him a 10-point lead over the New Democrats' Peggy Sattler. At five points, the race could easily go either way. At 10 points, the Tories look much more likely to pick up the seat. The Liberals, still mired at 17%, do not seem to be a factor whatsoever.

Of all the polls Forum put out, the one in Ottawa South seems the most likely to be at fault. A poll by Campaign Research showed a much closer race just a week before, and the riding has a strong Liberal streak. But the turnout model suggests Forum may even still be under-estimating Matt Young's lead, inflating his support from 48% to 51%, while John Fraser's shrinks to 32% from 34%.

The news continues to be grim for the OLP in Scarborough-Guildwood. There, Forum (and Campaign) had given the Liberals their only lead. It was worth six points for Mitzie Hunter against Ken Kirupa, while Adam Giambrone remained well behind at 21%. The turnout model transforms the race into a toss-up, giving Hunter 37% of the vote to 36% for Kirupa. Giambrone stays at 21%. If the turnout model has it here, Scarborough-Guildwood could be a surprise.

Windsor-Tecumseh seems to be the riding least likely to surprise anyone, as Percy Hatfield has a wide lead over the Tories and Liberals in both the adjusted and unadjusted numbers. His lead is reduced from 35 points to 34 points, but that hardly seems to be of concern. The model suggests that the OLP could do even worse than expected here.

In fact, across the board it appears that turnout will work against the Liberals. The adjustment is nowhere worth more than two points, but with the PCs gaining between two and four points due to turnout it puts the OLP in a much more precarious position. Without the adjustment, the Liberals could expect to win Scarborough-Guildwood and have a shot at Etobicoke-Lakeshore and, maybe, Ottawa South. With the adjustment, the Liberals are out of the running in every riding but Scarborough-Guildwood. If these sorts of trends hold, the Progressive Conservatives could pick up three seats (maybe even four) and the NDP one. That would be quite a blow against the government.

Final by-election polls are to be expected this week. I will be interested to see how the NDP is doing in London West and whether the Liberals will remain competitive in Scarborough-Guildwood, Etobicoke-Lakeshore, and Ottawa South. But as it stands, Thursday is setting up to be a difficult day for Kathleen Wynne.
Posted by Éric at 9:51:00 AM