Up until the end of the month, June was looking to be a polling desert. But in the end, six national firms and one Quebec firm reported by the end of the month, and in all over 9,000 Canadians were polled on their federal voting intentions. The result: Justin Trudeau's honeymoon may be on the wane. 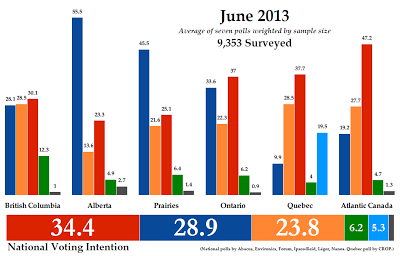 Nevertheless, the Liberals have maintained a sizable lead over the Conservatives. They averaged 34.4% support in June, a drop of 5.6 points from where they stood in May. The Conservatives were up 1.3 points to 28.9%, while the New Democrats were up 0.5 points to 23.8%.

That drop of almost six points for the Liberals is certainly significant - the last time a party has dropped that much in one month was between April and May 2011, when the Liberals plummeted to 19%  in the election. The Liberal decline is positive news for both the Tories and NDP as they have arrested their four months of consecutive decrease.

But it is difficult to compare apples to apples, as these six national firms have not been in the field in such a small window since the spring of 2012. If we compare to the last time they were all in the field, which goes back to September-December 2012, we see that the Liberal rise that the leadership campaign and Trudeau's win caused took from both the NDP and Conservatives.

Since September-December, and looking only at these polling firms, the Conservatives and NDP have each dropped around five and six points, respectively. The Liberals have picked up almost 11. 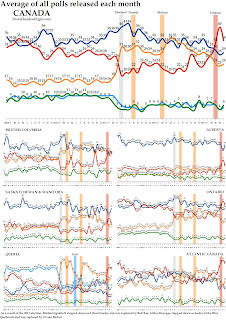 But it has to be recognized that June was not a particularly good month for the Liberals, at least on the face of it. The party was down in every region of the country, but in several places they are coming down from at least four year highs. With the exception of the May averages, the Liberals are still polling at some of their highest levels since before 2009.

In Alberta, the Conservatives picked up 8.3 points to reach 55.5%, putting them where they usually are in the province. The Liberals dropped 9.7 points to 23.3%, but that was largely due to the anomalous Forum poll from May that put the party at an implausible 42% in Alberta. Ignoring last month, the Liberals are doing better than they have since before 2009. The NDP was up 0.5 points to 13.6%, while the Greens were down 0.5 points to 4.9%.

In Quebec, the Liberals dropped 3.3 points to 37.7%, again their recent best with the exception of last month. The NDP gained for the second consecutive month (the first time that has happened since February-March 2012, when Thomas Mulcair won the leadership), picking up 0.8 points and averaging 28.5%. The Bloc Québécois was up 2.2 points to 19.5%, while the Conservatives dropped to single digits with a 0.2 point fall to 9.9%. The Greens were up 0.9 points to 4%.

With these levels of support, the Liberals would likely win 134 seats, with the Conservatives taking 120, the New Democrats winning 80, and the Bloc and Greens each winning two.

This represents a drop of 18 seats for the Liberals from the May projection, with the Conservatives picking up 11, the NDP six, and the Greens one.

That extra Green seat is Victoria, as I have added the by-election's results to the projection model. With the NDP down and the Greens up since that close contest, it follows that Victoria would fall into the Green camp - particularly since the area just elected its first Green MLA.

In the end, the 40% support the Liberals were registering in May was probably never going to be sustainable. New leaders almost always experience a burst in support, and that does seem to be what was going on. If the party settles in at the mid-30s, it would be hard to call that anything but a spectacular success in the context of the last election. The Conservatives are still struggling mightily, but they may have hit their floor. How the NDP's support plays out in the coming months will be the thing to watch.
Posted by Éric at 11:33:00 AM