Forum Research put out its latest Ontario provincial numbers via the Toronto Star this morning, finding the Progressive Conservatives to have a five-point edge over the Ontario Liberals. But the change in support since Forum's last poll is nothing significant. The potential effect of turnout in such a hypothetical election, however, could be. 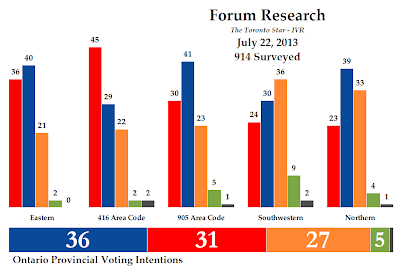 Forum was last in the field on June 26, another of their snap, one-day polls. The PCs gained one point since then, to lead with 36% support. The Liberals were down two points to 31%, while the New Democrats were up three points to 27%. While that is the biggest change of the main parties, it is still within the theoretical margin of error. However, if we look at where the parties stood at the end of May, we see that the NDP has picked up six points over that time while the Liberals have dropped seven. That could be a worrying trend for the OLP if it doesn't stop.

The Greens were down three points to 5%, while 1% of respondents said they would vote for another party. From the sample of decided and leaning voters, it appears that about 6% of respondents were undecided, no different from Forum's last poll.

This poll does have the same sampling issues that we usually see with Forum's surveys: 60% of the sample is over the age of 55, rather than the roughly 35% of adult Ontarians who are actually over that age. Only 8% of the sample was under the age of 34. This proportion of the population takes up closer to 27% of Ontario adults. This means that Forum has to apply some pretty important weights.

In that context, it is remarkable how steady the Tories have been in Forum's polling. They have been at 34%, 35%, or 36% in the firm's last six polls going back to March. The Liberals have wobbled more significantly, with between 31% and 38% over that time. The NDP has also seen a good deal of fluctuations, with between 21% and 27% support. This suggests that voters are swinging between the OLP and the NDP.

Regionally, only two shifts in support appear worth highlighting: an 11-point gain for the Liberals in eastern Ontario (good news for John Fraser in Ottawa South) and a 10-point gain for the NDP in southwestern Ontario (good news for Percy Hatfield in Windsor-Tecumseh and Peggy Sattler in London West). The PCs have the edge in eastern Ontario, northern Ontario (which stretches down to around Barrie in Forum's estimation), and the 905 area code, while the NDP is ahead in the southwest and the Liberals in Toronto.

With these regional numbers, the Progressive Conservatives would win 46 seats and probably form a minority government. The Liberals would narrowly edge out the NDP for the Official Opposition role, with 31 seats to 30 for the New Democrats.

Outside of Toronto and eastern Ontario, the Liberals are at a severe disadvantage, especially considering their weakness in the southwest and northern parts of the province. The NDP is able to win a whole swathe of seats in those areas, while the PCs dominate the GTA and take a good number of seats in the rest of the province as well.

But what if we take ThreeHundredEight's simple turnout model into account? With that adjustment, the Progressive Conservatives would be expected to take 38% of the vote to 33% for the Liberals and only 23% for the New Democrats. If we apply that adjustment to the regional numbers, we get a seat haul of 49 for the Progressive Conservatives, 37 for the Liberals, and only 21 for the New Democrats. Still a PC minority, but the Liberals would be in a far stronger position. The NDP is penalized most significantly in the southwest, where they drop to eight seats (four more go to the PCs and two more to the OLP).

This gives a very clear demonstration of how turnout can impact outcomes. The PCs get to within only five seats of a majority government, close enough for just a slight error in the polling or seat modelling to put them over the top. The Liberals go from being in danger of falling to third place to being clearly in second, while the NDP goes from hopeful Official Opposition to third place again.

But their leader, Andrea Horwath, remains first in approval ratings. She scored 43% in this poll, compared to 35% disapproval. Her numbers have been very steady for some time. Among NDP voters her approval rating soars to 73%, while it is still at a very solid 45% among Liberals.

Kathleen Wynne's approval rating stands at 35%, while her disapproval has increased by five points to 48%. Among Liberals, her approval rating is 72%. Interestingly, she scored 41% among New Democrats - an increase of 10 points since last month.

The situation in Ontario, despite a little back and forth in the numbers, has been pretty static since Kathleen Wynne became premier. The PCs and Liberals trade the lead and the NDP remains in third, but well above where they were in 2011. It makes calling an election a gamble for every party: the PCs could return to opposition, the Liberals could lose power, and the NDP could lose the influence they have in a minority legislature. If the plug is pulled this fall or if budget negotiations fail in the spring, no leader is likely to have any great confidence in victory. Better to just roll the dice and end the uncertainty.
Posted by Éric at 10:40:00 AM