Kickstarter Update #4 - We did it!

Yesterday was an incredible day of generosity, as we bounded from 72% funding to over 100%! That means that Tapping into the Pulse will be written and published as an ebook! Thanks so much to all of you for pledging and helping to spread the word about this project. I had worried that my funding goal was too ambitious and had figured it would come down to the wire, but I'm blown away that we reached our goal in just 21 days.

I'm really touched, as it validates the work I've put into this site over the last five years. It is terrific to see that there is support for this sort of independent work in Canada. Thanks so much!

So that's it then, right?

No! Though the funding goal has been reached, there is still plenty of incentive to keep the ticker going:

Pledging $10 or more secures a Kickstarter backers-only edition of Tapping into the Pulse, at least one month before it is set loose on the public. That means reading this eBook at the end of February (the deadline I have set) instead of the end of March or beginning of April.

Pledging $10 also means that you'll save money! When the ebook is released to the general public on Amazon, and potentially elsewhere, it will be priced at more than the minimum $10 pledge. So, reserve your backers-only edition and save!

There are still plenty of ridings to be claimed for a historical profile that will be posted on this site before the 2015 federal election. A pledge of $75 gets you the riding history of your choice and a pledge of $100 means I will toil over an analysis topic of your choice. Put me to work!

And then there is the warm and fuzzy feeling that you're guaranteed (note: not a guarantee) to get when you pledge. It means you support independent polling analysis and the continued operation of this site. And, it also means more going to me: Kickstarter takes an impressively small portion of every pledge while Amazon, on the other hand, takes a much larger share (we're talking three to seven times as much)!

I think we're too late in the funding period, and too close to the holidays, to reach any reasonable stretch goal. But there are plenty of reasons why you should pledge before the clock strikes midnight on Dec. 27.

Yesterday, I posted three cover mock-ups that were created by the good folks at IndieBookLauncher.com, who have generously donated their services to the project. I asked for your opinions, and they are in. Your choice was overwhelming. It wasn't even close. And some of you had, er, particularly strong opinions. 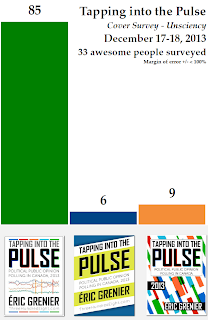 The cover on the left received 85% of the fake ballots cast in this informal, unscientific "poll". The cover on the right - which was the most controversial entry - received 9% support. The cover in the middle, which was actually my favourite (it reminded me of Nate Silver's The Signal and the Noise, which is probably why I wouldn't have selected it), received just 6% support.

Now, I may have inadvertently biased the sample when I posted on Twitter that the cover on the left was already emerging as the most popular. There was a lesson in how not to conduct a poll there. Nevertheless, the cover on the left follows most in the style of ThreeHundredEight, so it makes sense that this ebook - a product and extension of ThreeHundredEight - should follow in the same style.

Thanks for voting! The cover on the left will be the cover for Tapping into the Pulse. I'll post a revised, refined draft of it later in the week.

Again, thank you so much for your generosity in this Kickstarter drive. I'll do my best with the book to live up to the awesome standard that has been set by you all.

We'll get back to your regularly scheduled polling analysis shortly. We just need a new poll to come out... *crickets*
Posted by Éric at 9:41:00 AM