A year in polling

2013 has been a remarkable year in politics and political polling, with the Liberals returning from the dead, the Senate scandal shaking things up, and the surprise result of the provincial election in British Columbia. New provincial party leaders have been named in Saskatchewan, Manitoba, Ontario, Quebec, New Brunswick, and Newfoundland and Labrador, with Justin Trudeau taking over the federal Liberals and Daniel Paillé bowing out of the Bloc Québécois.

Tapping into the Pulse: Political public opinion polling in Canada, 2013 is an eBook I'm working on that was successfully funded on Kickstarter last week. Thanks to those who pledged! The Kickstarter drive ends on December 27, so you still have a few more days to reserve your advance copy (to be delivered one month before the book goes on sale), contribute to this website, and save a little money off the sticker price. It will be a comprehensive record of the year in politics and particularly in polling, and I hope you'll enjoy it!

With the year coming to a close, let's take a look here at how the federal parties have done in the polls over the course of 2013. We'll also compare their performances to how they did in 2011 and 2012 (I did this last year as well). The differences are remarkable. 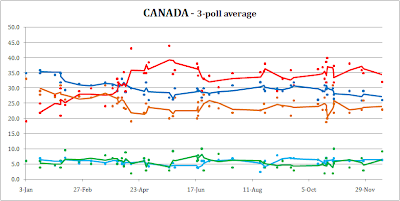 The chart above and those below show each individual poll result that was released throughout 2013 at the federal level, as well as a rolling three-poll average.

As you can see from the above, most of the change that has taken place nationwide occurred just after Trudeau became leader. Since then, the three parties have generally been in stasis. But the trends are looking negative for the Conservatives. 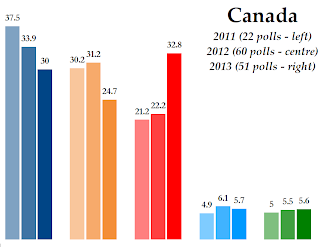 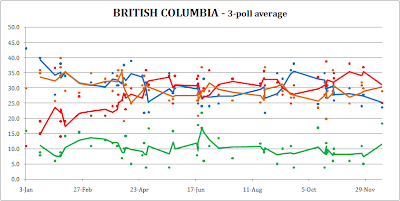 Starting west, British Columbia has been a bit of a jumble throughout the year. All three parties have been jostling for the lead since April, but it was Trudeau's arrival that turned an NDP/Conservative race into a three-way contest. 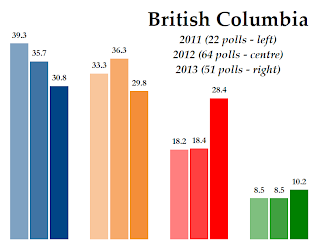 Here again, the Liberals picked up about 10 points in B.C. in 2013, coming from both the Conservatives and the New Democrats. The Tories regained the lead overall in 2013, but they actually lost it in the last few months. 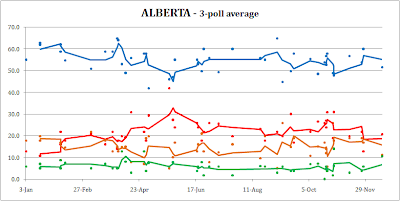 Nothing too remarkable in Alberta, with the Conservatives generally holding stable after losing some support after Trudeau came along. 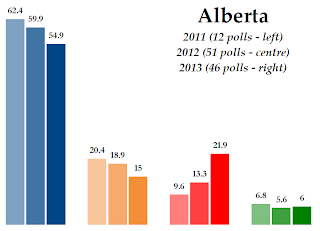 The same pattern nationally is repeated in Alberta, with the Conservatives losing about seven points over the last two years and the Liberals picking up about 12. 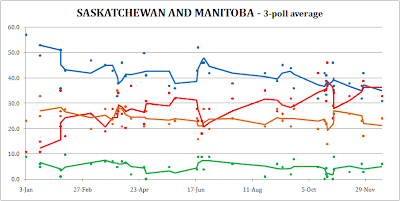 In the Praires, the Liberals moved into second after April and are now challenging the Conservatives for first place. Support for the NDP has been generally stable throughout the year. 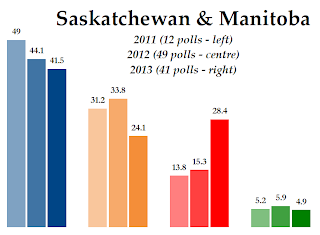 The gain in 2013 for the Liberals is especially marked here, as the party has picked up about 13 points in 2013 as compared to 2012. The Conservatives have dropped but most of the Liberal gains made throughout the year came from the New Democrats. 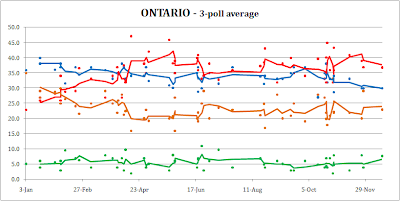 Ontario has mostly been a close race between the Conservatives and Liberals, but that has changed in the last few months as the Liberals have moved ahead. 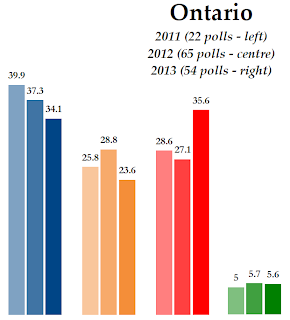 The Conservatives have dropped six points over the last two years, with the Liberals picking up most of that. The NDP, after increasing in 2012, is back down below where they were in 2011. 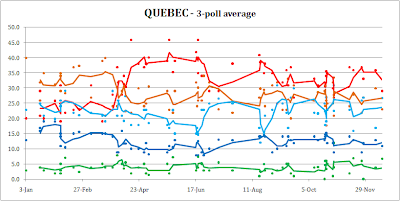 Quebec has been pretty interesting - the NDP started the year in front and lost it when Trudeau came along. He gave the party a wide lead until the summer, when the race became a lot closer. Through it all, the Bloc's support has been mostly steady (though it did uptick during the summer) while the Conservatives have been safely in fourth. 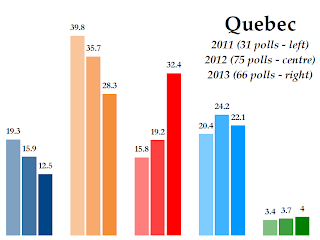 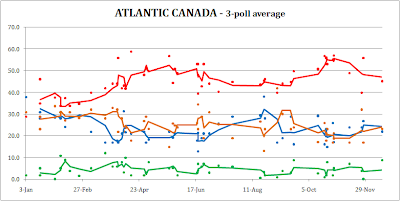 Atlantic Canada has been the Liberal Show, both at the provincial and federal levels. The lead for the Liberals here is almost as wide as that of the Conservatives in Alberta. 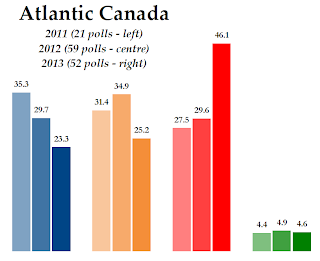 What will 2014 hold? We certainly aren't done with the Senate, and the Bloc Québécois will choose a new leader, likely in the spring. Apart from that: events, dear boy, events. With Thomas Mulcair begin to regain the support he lost when Justin Trudeau became Liberal leader? Will Trudeau be able to hold on to that support? What influence will the likely elections in Ontario and Quebec have on the federal scene, particularly if the Parti Québécois is given a majority?

It should be an interesting year. I hope to cover it with the next annual edition of Tapping into the Pulse! This will likely be the last post of 2013, so I wanted to take this opportunity to wish you all a safe and happy holidays, and all the best in 2014. Thanks for reading, see you next year!
Posted by Éric at 10:46:00 AM