Paillé and the Bloc Québécois

Daniel Paillé has announced he is resigning the leadership of the Bloc Québécois, a position he has held for two years after defeating Maria Mourani (now an independent MP) and Jean-François Fortin (one of the Bloc's four MPs) in the December 2011 leadership race. Paillé is resigning for health reasons related to his suffering from epilepsy. All the best to him in coping with these health issues, which he thankfully says are under control. One cannot blame him for wanting to step down because of these problems, based on some of the reports of the symptoms.

Kickstarter Update: Funding continues to plod ahead, but only 10 days remain and we still have 30% to go before the funding goal is reached! I will have some exciting news tomorrow about the project. Please pledge or spread the word if you already have!

But the last two years have undoubtedly not been easy on Paillé, as he has struggled to keep the Bloc Québécois relevant. The party put up weak numbers in the Bourassa by-election and a recent poll by Léger suggested that almost half of Quebecers did not know who Paillé was. Another 20% had no opinion of him. This has been a major reason for the difficulty the Bloc has had in competing with the Liberals and New Democrats in the province. The leaders of those two parties are, by comparison, hyper-present. 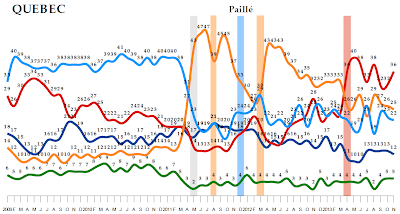 The chart above shows the evolution of support in Quebec since January 2009, when the Bloc Québécois was unchallenged for supremacy in the province. Indeed, throughout 2010 and until the 2011 election campaign the Bloc enjoyed a 10 to 20 point lead over the Liberals, who were running second in the province at that time. A large lead for the BQ had been a feature of Quebec polling going back to the fall of the Liberals in the wake of the Gomery Inquiry.

Between Gilles Duceppe's resignation and the leadership victory of Paillé, the party was treading water at around 20%, slightly below where the party ended up on election night. After Paillé was named leader, the Bloc did indeed gain in the polls but it is difficult to determine whether this can be credited to Paillé or the opportunity provided by the lack of leadership of the NDP. Polling at the time suggested that the NDP's support in Quebec would collapse with any other leader than Thomas Mulcair, which was a possibility before that party's leadership campaign came to an end in March 2012. Just before Mulcair became leader, the Bloc had maneuvered itself back into first place.

But since Mulcair's leadership of the NDP, the Bloc has been stagnant. It has wobbled back and forth between the low and high 20s, with no clear discernible trend in either direction. This suggests that the supporters the Bloc had in the 2011 election are still there, but that the party has not progressed past its apparent floor. And now with the arrival of Justin Trudeau on the scene, the Bloc has moved from second to third in the province. 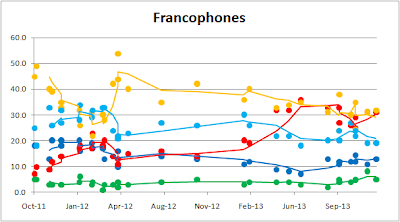 The chart above shows support among francophones since 2011 and the kind of trouble the Bloc Québécois has fallen into. The party did move ahead among francophones against the leaderless NDP, but afterwards fell into second place and are now in third behind the Liberals and NDP. This must be hard to swallow for a sovereigntist party, especially considering that its provincial counterpart holds a 10-point lead among francophones. 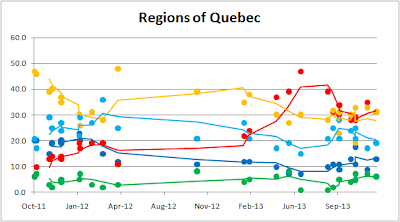 The party's support in the regions of Quebec mirrors that among francophones, which is problematic since this is the part of the province where the Bloc's four seats are located and is where the Bloc has the best shot of winning new ones.

The ability of the Bloc Québécois to win new seats can be inflated by seat projection models, suggesting a better health for the party than exists in reality. This is not because the seat projection models are wrong - it is simply because with the NDP moving down and the Liberals moving up, the Bloc is in a good position to win five to 15 seats new seats simply by default - often with little more than 30% support in any one of them. This is an anomaly of our election system, and one that the Bloc would certainly be happy to accept if it gets them back into official party status in 2015. But it should be taken into account when looking at the seat projections on this site, which frequently have the BQ in double-digits in seats.

What of the future for the Bloc Québécois? The obvious successor to Paillé is Fortin, who came in third (and last) in the leadership race. The person who came in second - Mourani - is no longer in caucus. Fortin also represents a riding in a region of the province, the Gaspésie, that should be considered one of the better ones for the Bloc Québécois. He would, on paper, have the best chance of re-election in 2015 among the Bloc's four MPs, though the region is susceptible to a Liberal rebound.

André Bellavance did not show interest in the leadership in 2011, and Louis Plamondon is at the end of his political career. Claude Patry, the MP who crossed the floor from the NDP, would have a hard time mounting a serious campaign. That leaves Fortin - unless someone from outside of the small caucus decides to take a run at the leadership. It is hard to imagine a serious contender who would, considering that a candidacy with the Parti Québécois in the upcoming provincial election is a much safer bet. And after the experience of Paillé, who had so much trouble making himself known from outside the House of Commons, it would seem to be a mistake for the Bloc to go for another leader outside caucus. Unless, of course, they could find someone better known than Fortin to run for the job.

Update (Dec. 17): I may have been too hasty to consider Fortin the front-runner. This report in Le Devoir seems to lean more towards Bellavance as being the most likely leader to emerge from caucus - if Gilles Duceppe does not return!

This does provide an opportunity for the Bloc Québécois to renew itself again and hope for a rebound in the polls, but the party is not in an enviable spot. It will be interesting to see how things will unfold here - and whether the Bloc will wait until the next provincial election is over before holding its own leadership race. Quebec remains in flux, then, and the final list of the leaders who will contest the 2015 election is again unknown.
Posted by Éric at 1:56:00 PM