The latest quarterly results are in from the Corporate Research Associates, and they show the provincial Liberals leading in every province in Atlantic Canada - and by significant margins.

Kickstarter Update: We're now at 38% with 22 days to go. Let's keep this project on track to being funded!

The province that most recently went to the polls, Nova Scotia, seems pleased with their new government. Stephen McNeil's Liberals led with 58%, up 12 points from their October election result. Both the Tories and New Democrats fell to 19%. Satisfaction with the government stands at 50%, with 12% dissatisfied and 25% saying it is too soon to tell.

But now let's get to the provinces that are going to the polls next, starting with New Brunswick. Their next election is scheduled to take place less than a year from now. 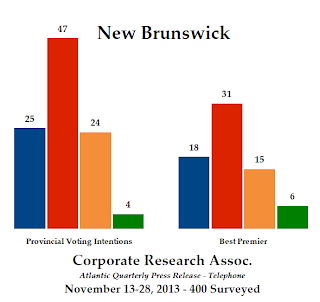 Brian Gallant's Liberals held steady with 47% support, unchanged from CRA's last poll from three months ago. The governing Tories picked up two points, within the margin of error, to inch ahead of the New Democrats, who were unchanged at 24% support. About 32% of those contacted with undecided, with another 10% refusing to answer.

Gallant was up a single point on being the best person to be premier, to 31%. David Alward was down one point to 18%, while Dominic Cardy of the NDP was unchanged at 15%. If we remove the undecideds from this question, we see that all three leaders are generally polling even with their own parties.

With these levels of support, Gallant's Liberals would likely win some 40 seats and easily form a majority government. The Tories would be reduced to nine seats while the NDP would pick up six, their best-ever result.

A little more than half of Liberal seats would come in the eastern part of the province, and the party would win the majority of seats in every region. Most of the Tory seats would be drawn from around the Fredericton and Moncton regions, while the NDP would do best in the northeast and around Saint John.

Time is slowly running out for Alward, as the number of months before the next election can be counted on two hands. His party hasn't led in a poll since August 2012, and the fresh-faced Gallant has been trumping him on his personal ratings. It will be interesting to see if Gallant's magic wears off before the province starts tumbling towards the next election in September.

Fortunately for the Progressive Conservatives in Newfoundland and Labrador, the next election is still two years away. But the Tories are in even more trouble there. 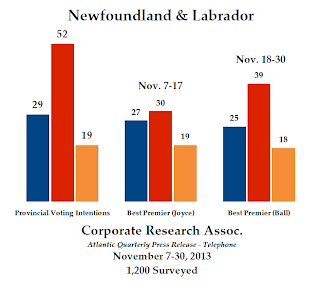 The Liberals picked up 11 points in the last three months, to move into a decisive lead with 52% support (note that this CRA poll has a massive 1,200 sample), a move that is well outside the margin of error. Their gain has come primarily at the expense of the self-destructing New Democrats, who plunged 14 points to just 19% support. The Tories were virtually unchanged, up three points to 29%.

That is a major change of fortunes for the NDP, who were leading in the polls as recently as May of this year. This CRA poll confirms the latest set of numbers we saw from MQO that were done at the end of October, suggesting that this is not just a blip and cannot be completely chalked up to Dwight Ball's leadership victory.

About 25% of the sample was undecided, with another 7% refusing to answer.

CRA helpfully separated their leadership question between those surveyed before and after the Liberal leadership race came to an end. Interim leader Eddie Joyce was seen as the best person to be premier by 30%, a gain of nine points over the August numbers, while Kathy Dunderdale was up five points to 27% and Lorraine Michael was down 16 points (almost half!) to 19%. In this case, Dunderdale was polling ahead of her party and both Joyce and Michael behind theirs.

Once Ball was added to the mix, the Liberal leader's numbers increased to 39%, with Dunderdale and Michael falling slightly to 25% and 18%, respectively. This put them generally in line with where their parties stood, after the removal of the undecideds.

Satisfaction with Dunderdale's government increased by 11 points to 42%, a much-needed boost for them. But this gain came primarily among those who said they were 'mostly' satisfied. Those who were completely satisfied numbered just 4%, roughly equal with the numbers in Prince Edward Island and New Brunswick.

With these levels of support, the Liberals would form a majority government of some 30 seats, virtually all of them coming outside of St. John's. This concentration outside of the city may be a problem with the model as, if the Liberals have this much support, they are probably going to grow disproportionately in the capital, with smaller levels of growth in the rest of Newfoundland. But in the end, it would even out.

The Tories would likely win 11 seats, with the NDP taking advantage of the PCs' weakness to win seven.

These numbers remain disastrous for the Tories, but their time in government might be coming to a natural end after 10 years in power (12 by the next election). For the NDP, however, the opportunity for a major breakthrough in the province has come and gone, and for apparently no good reason. Michael and the NDP were polling well. The decision of a few of her MHA's to try to sabotage her leadership, and then bolt from caucus when the plan went sour, has likely fatally set the party back. 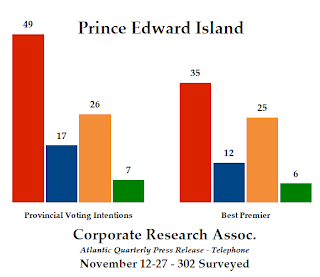 The New Democrats are doing better in Prince Edward Island, however, where they remain in second place (note: the party took just 3% of the vote in 2011). The Liberals picked up seven points, however, to move back to 49% and where Robert Ghiz has been polling for most of his tenure. The NDP was down six points to 26%, while the Tories were down six points to 17%. All of these shifts are within the margin of error (the samples are small). About 29% were undecided, with another 11% refusing to answer.

Ghiz managed 35% on who would make the best premier, a gain of four points. Mike Redmond was second with 25%, while Steven Myers of the Tories was at 12%. These numbers suggest that Ghiz is slightly less popular than his party, and Redmond slightly more. Satisfaction with the government was up eight points to 50%.

The seat model gives the Liberals all 27 seats at these levels of support. This is likely due to the extremely small portion of the vote the NDP took in 2011. I imagine if these numbers were replicated exactly in an election, Redmond and perhaps one or two good NDP candidates would have a good shot at winning. One or two Tory incumbents might also survive the reaping. But that the Liberals would win another landslide is not in doubt.

And, remarkably, that is the case throughout Atlantic Canada. The Liberals averaged 51.5% support in these four provinces, compared to just 22.5% for the PCs and 22% for the New Democrats. These numbers are eerily similar to the federal Liberals' performance in recent polls in the region, and a quick glance at the tracking charts shows that the Liberals all experienced a boost at around the time that Justin Trudeau became the federal leader. Coincidence?
Posted by Éric at 11:32:00 AM