A new poll by Ipsos Reid for CTV News emerged yesterday evening, painting a very different picture of the race in Quebec. The survey gave the Liberals 37% support against just 32% for the Parti Québécois. The message appears to be clear: the PQ's campaign is falling apart as the Liberals surge ahead. But can we really say that based on the information in this poll?

As this poll gives the Liberals a wider lead over the PQ than any survey has shown since December 2013 and includes a Liberal lead in the regions outside the two main cities, the projection has shifted quite dramatically. The Liberals are now projected to win 62 seats, or between 52 and 71 seats, while the PQ has dropped to 57 seats, or between 49 and 67 seats. This means that, if an election were held today, the Liberals would have a better chance of prevailing than the PQ, and also have a higher chance of a majority victory than the PQ. But, the race remains close enough that both parties could manage either a minority or majority victory.

A brief methodological note: this Ipsos Reid poll included numbers for committed voters, or those most likely to vote on election day. The projection has focused on those numbers rather than on the voting intentions of all decided eligible voters. For the regional results of the poll, a uniform swing based on the difference between the province wide support of decided and likely voters has been applied. Why have I focused on the likely voters? Because the purpose of the projection is to make a best estimate of likely outcomes. The outcome of the election will be decided by people who actually vote. 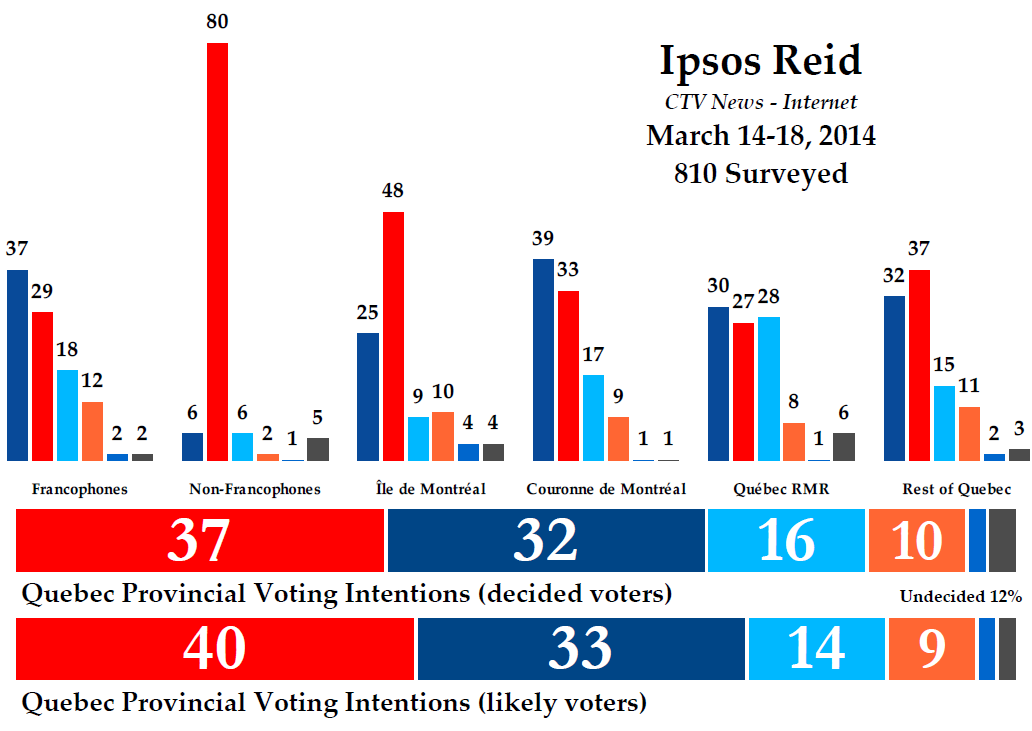 Ipsos Reid has not reported on provincial voting intentions in Quebec for several years. This is their first foray into the field, which makes it impossible to discern any trends. Discussion that the Ipsos Reid poll confirms the gains the Liberals have made is off the mark. We don't know what Ipsos Reid would have recorded earlier, so it is impossible to say whether the Liberals have made any gains or not. The poll does add to the evidence, however, that the Liberals are now ahead in voting intentions.

Well, sort of. This poll is the smallest one so far published in the campaign, with a sample of 810 Quebecers and 665 decided voters (the number of committed voters is even smaller, at 475). Technically, this means that the five-point lead recorded here for the Liberals is actually within the margin of error of a probabilistic sample of this size. That means that, while it is more likely that the Liberals are ahead, we cannot definitively say that they are. But when put in the context of the recent CROP poll, we are safe to say that the poll goes some way towards confirming the Liberal advantage.

The poll gave the Liberals 37% support against 32% for the PQ, their lowest result in any poll in four months (though, again, considering the sample size that puts it within range of the CROP poll that had the PQ at 36%). The CAQ followed in third with 16%, while Québec Solidaire was at 10%, Option Nationale was at 2%, and support for other parties was 3%.

Among those who said that nothing short of an emergency would prevent them from voting, the Liberals led with 40% to 33% for the PQ, 14% for the CAQ, and 9% for QS. I think this is a good attempt to measure the likelihood of voting, and the results are intuitive. For example, the likelihood of a respondent saying they'd vote increased as they got older and other polls have recorded that supporters of the CAQ and QS are less committed. These numbers would also seem to support the oft-repeated claim that the Liberals have a ballot box bonus (and they do, except when they don't, which is how most of these turnout models end up working).

The numbers in the rest of the province are a little more unusual. In Quebec City, the PQ was narrowly ahead with 30% to 28% for the CAQ, 27% for the Liberals, and 8% for QS. Compared to other polls that have shown the Liberals well ahead and the CAQ collapsing, these numbers are certainly out of the ordinary. But the sample here is small: only 78 respondents, which in a probabilistic sample carries a margin of error of +/- 11%.

In the rest of the province, the Liberals were ahead with 37% to 32% for the PQ, 15% for the CAQ, and 11% for QS. The Liberals have not led in any poll in the regions since September 2013, but the last CROP poll did show the gap narrowing to just two points.

On a series of leadership questions the responses aligned closely with voting intentions, with roughly 75% to 85% of supporters of each party choosing the leader of that party on questions relating to trust, the economy, values, etc. The one question where things did not match up so well with the province wide vote, however, was on who Quebecers would most like to have a beer with. On that score, François Legault came out ahead with 26% to 22% for Philippe Couillard, 19% for Françoise David, and 18% for Pauline Marois. If that is a proxy for likability, Legault might have the most to gain from tonight's debate.

Ipsos polled on the question of sovereignty, finding that 37% (after distribution of undecideds) supported sovereignty-association (CAQ voters split 22/61 on this question). On outright independence, support dropped to 32% (PQ supporters split 67-13, QS 41-33, and CAQ 11-77 on this question). That is a little low, considering that both CROP and Léger no longer ask about sovereignty-association and have found support to be closer to 40%.

Finally, Ipsos also asked about the elephant in the campaign, Pierre Karl Péladeau. His entry apparently did very little to encourage people to vote for the PQ. Just 10% of CAQ and QS supporters said it made them more likely to vote PQ (much less than the 27% and 36%, respectively, who said it made them less likely). It did nothing to bring Liberal voters to the PQ.

But Quebecers do not necessarily dislike his entry into politics, as 46% said it was a good thing for Quebec, including 47% of CAQ supporters and even 36% of QS supporters.

Overall, what do we take from this poll? It has to be read with a good degree of context, considering the sample size (regionally, only on the island of Montreal does any party hold a definitive lead, but we don't need a poll to tell us that). When we look at committed voters, the results of the poll vary by only marginal degrees from the most recent surveys by CROP and Léger. The poll certainly suggests that the Liberals are having a good campaign, and that things have stagnated or worsened for the PQ. Is it a five or seven point lead? We'll have to wait for more polls to determine whether the campaign has really taken such a decisive turn.
Posted by Éric at 1:08:00 PM