Liberals gain among francophones, but PQ still in majority territory

A new poll by Léger for The Globe and Mail and Le Devoir confirmed that the Parti Québécois and Liberals have moved into a tie, as Philippe Couillard's party makes gains among francophone Quebecers. But the gap between the two parties among this demographic remains huge, giving the PQ enough support to have reasonable expectations of winning a majority government.

As the province wide results of the Léger poll hardly differed from the projection at the time, the numbers have barely moved. The PQ and Liberals are now tied with an estimated 36.9% support apiece, with likely support ranging between 36% and 41% for the PQ and 35% and 41% for the Liberals.

The seat count has moved slightly, with the PQ down one seat to 66, the Liberals up two to 54, and the CAQ down one to just three. The likely ranges give the PQ 58 to 73 seats, straddling the line of a majority government, while the Liberals should be able to win between 46 and 63 seats at this level of support. That makes a Liberal majority government possible, but not likely. The CAQ is now between two and four seats, while at its maximum level QS has moved into play in a third seat.

Most of the changes at the regional level have occurred around Montreal. The PQ dropped four points on the island, all of which was picked up by QS. In the suburbs around the island, the PQ picked up five points, three of them coming from the CAQ. 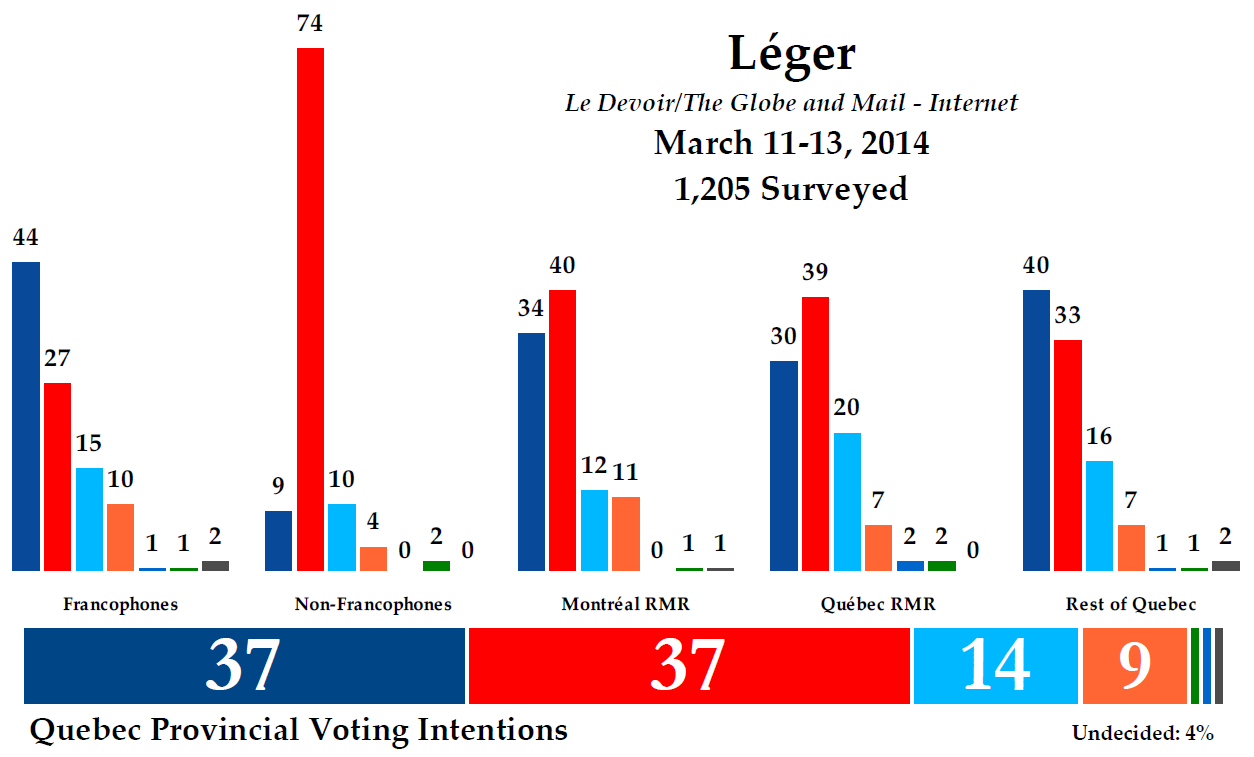 This is Léger's first campaign poll, having reported for Le Journal de Montréal just before the campaign began. The poll shows very little change since then at the provincial level, with the PQ unchanged at 37%, the Liberals up two points to 37%, and the CAQ down one point to 14%.

This is the third consecutive drop in Léger's polling for the CAQ, however. The party was at 19% in December 2013. The Liberals have been gaining, having been at 33% in January. This seems to be the story of the campaign so far, as CAQ voters drift over to the Liberals. The candidacy of Pierre Karl Péladeau, and the subsequent focus on sovereignty, may have pushed CAQ federalists over to the best anti-PQ option, whereas the PQ may have already made all the gains it can make.

Québec Solidaire was up one point to 9%, while the Greens, Option Nationale, and other parties had 1% apiece.

Among francophones, the PQ led with 44% while the Liberals picked up four points (which would be outside the theoretical margin of error of a probabilistic sample) to reach 27%. The CAQ fell to 15%, and QS was up to 10%. While that is a positive sign for the Liberals, they are still too far behind the PQ to have a good hope of winning a majority government.

These regional results are quite poor for the CAQ, as they have no real region of strength. For the PQ, it gives them the ability to win quite a few seats in the Montreal suburbs and the francophone parts of the province outside the two metropolitan areas. The Liberals are competitive enough outside of Montreal to win their fair share as well, but as usual they have a lot of wasted votes on the island.

This poll included many other questions that allow us to dig down into the electorate. There are good signs in those questions for both the PQ and the Liberals, making it a poll for everybody! (Except the CAQ.)

Vote choice seems to be solidifying, with 69% saying their choice is definitive. That is up four points from Léger's pre-campaign poll. Another 20% say their choice will probably change, down two points.

But for the CAQ, who seem very likely to lose some uncommitteds, the Liberals have the most to gain. Fully 43% of CAQ voters say the Liberals are their second choice, with just 17% choosing the PQ. While the PQ does have the most to gain from wavering QS voters (35%, a gain of nine, select the PQ as their second choice) there aren't nearly as many.

On leadership, Pauline Marois is unchanged with 27% choosing her as the best person to be premier. Couillard was up slightly to 26%, while François Legault was down slightly to 14% and Françoise David up to 9%. Compared to support for their respective parties before removing undecideds, that signals that both Legault and David are slightly more popular than their parties, while Marois and Couillard are less popular.

But among francophones, Marois is the top choice for premier of 33%, with Couillard at just 18% and Legault at 16%. Among this important electorate, Marois and the PQ hold a distinct advantage.

Quebecers also think that Marois and the PQ have been running the best campaign: 31% said so, compared to 19% for Couillard and the Liberals and 10% for Legault and the CAQ (among francophones, those numbers were 36-15-11). And 40% of Quebecers (and 49% of francophones) think the PQ has presented the best team of new candidates, compared to 21% for the Liberals and 4% for the CAQ.

About half of Quebecers think the PQ will win the election, while one quarter think the Liberals will prevail. One good sign for the Liberals, however, is that a large majority of voters want to hear less about sovereignty and the charter of values, and more about the economy and healthcare. This suggests that Quebecers are tired of hearing about the two most important issues for the PQ in this campaign. But that is not necessarily negative - it could simply be that voters are decided on these issues and want to discuss something else. However, that would also mean the PQ has little more room for growth.

The Liberals are not particularly strong on this issue either. When asked who would be the best person to defend Canadian unity in a new referendum, Couillard had just 10% - behind Justin Trudeau (27%) and Thomas Mulcair (21%). It is difficult to see much enthusiasm among the PLQ voter pool.

Léger also asked about the opinions Quebecers had of some of the star candidates the parties have presented. The news was bad for most of them, as the proportion of Quebecers not knowing who they were was 83% or more for all but five of the 12 names listed. This included Andrés Fontecilla, co-spokesperson for Québec Solidaire and ostensibly the equal of Françoise David. Fully 89% of voters did not know who he was. Of those who did, opinion was split down the middle.

The big name on the list was, of course, Péladeau. Just 18% of Quebecers did not have an opinion of him, a very small number. Opinion of him was split, with 42% having a positive opinion and 40% having a negative opinion. This suggests he does not boost the PQ particularly well, since he is a polarizing figure.

The next best known candidate was Gaétan Barrette, who had an unsuccessful run for the CAQ in 2012 and is now trying his luck under the Liberal banner against Fatima Houda-Pepin in La Pinière. But just 16% had a positive opinion of him, against 48% who had a negative opinion. That is a rather bad split - take out the undecideds and it is 25/75. Does that make him a star, or a drag?

Martine Desjardins, a former student leader during the protests that dogged Jean Charest's government, is running for the PQ and has a relatively positive reputation: 31% have a good opinion of her, against 25% who have a bad opinion of her. Still, 45% did not have an opinion either way.

These were the only names listed where a majority of those polled knew who they were. Two others were recognized by more than one in five Quebecers: Loraine Pintal (actress, running for the PQ) and Diane Lamarre (former head of the order of pharmacists in Quebec, also running for the PQ). Opinion of them was also positive: 23% to 6% for Pintal and 16% to 5% for Lamarre. Altogether, this would seem to back up the polling on who has the best team of new candidates. But Péladeau has not nearly had the effect many expected to him have (including me), which is certainly a disappointment for the Parti Québécois. In fact, they may have had a better shot at winning without him.

The week will be dominated by preparations for Thursday's first leaders debate. With Marois and Couillard neck-and-neck, it will be a very important moment. Legault will have the opportunity to do something to turn his party around, as 15% of Quebecers said they are waiting for the debate to confirm their opinions. A small percentage, perhaps, but more than enough to radically change the course of the campaign.
Posted by Éric at 10:05:00 AM