The first poll to emerge out of Quebec since the candidacy of Pierre Karl Péladeau was announced on Sunday was released this morning. It only looks at Quebec City, however, so we should exercise caution when drawing wider conclusions from the results. That being said, the poll does hint that Péladeau's effect may not be uniform across the province.

The poll has been added to the projection, though only for the Quebec City region itself. The effect is relatively small, but does boost the Liberals by one more seat at the expense of the CAQ. The Liberals are now projected to have between 36% and 42% support in the region, against 31% to 35% for the PQ and 19% to 22% for the CAQ. The Liberals would likely win between six and nine seats in the region at these levels of support, with the PQ winning two or three seats and the CAQ winning as many as two or as few as none.

In the chart below, I've included the latest poll from Léger (done for FM93) as well as the results of Léger's previous two polls in the Quebec City region. 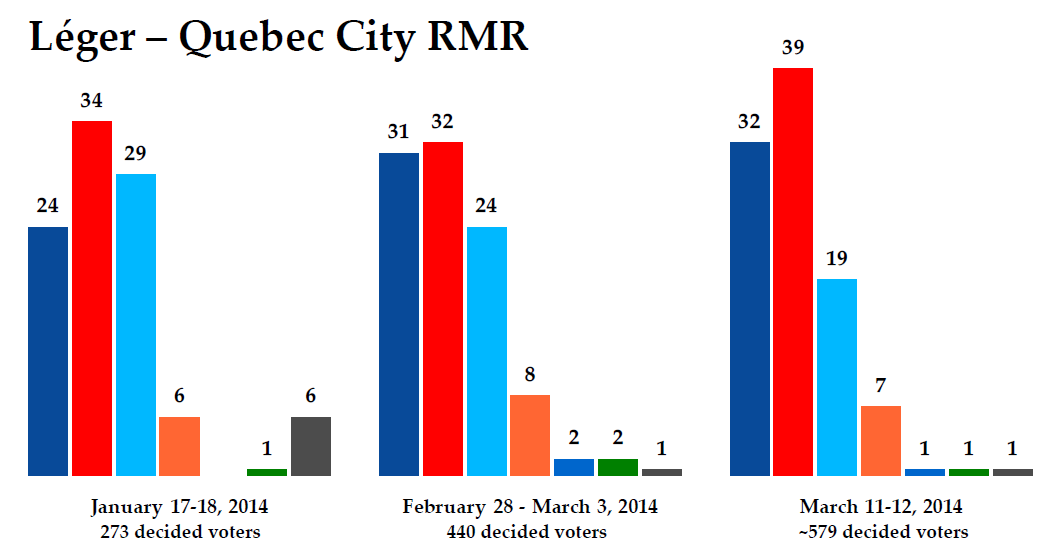 The Léger poll gives the Liberals the lead in the region with 39%, a gain of seven points since Léger's pre-campaign poll. That gain is outside of the margin of error - or at least the margin of error of a probabilistic sample (Léger's polls, like those of CROP, are done online).

The Parti Québécois placed second with 32%, an insignificant gain of one point. The Coalition Avenir Québec, meanwhile, dropped five points to just 19%. That is within the theoretical margin of error, but only just, so it is likely real.

Québec Solidaire had 7% support, followed by Option Nationale, the Greens, and other parties with 1% support apiece. One in ten respondents were undecided or did not respond to this question.

This is the best number the Liberals have managed in Quebec City in polls by Léger and CROP since August 2013. The PQ, however, has been very stable. Polls by the two firms have pegged the party's support at between 30% and 35% since January (including the latest CROP). For the CAQ, this is their worst result in a non-Forum poll since October 2013 and an important drop, since earlier polls by Forum, CROP, and Léger conducted in the last few weeks all agreed that the party had between 22% and 24% support in the region.

In the context of the last three Léger polls, there is no clear trend for the Liberals. The PQ has gained, however, picking up eight points since January (which would be outside the theoretical margin of error). The CAQ has shed 10 points in just a few months.

A little more context: in the 2012 election, the CAQ took 38% support in the region, followed by 31% for the Liberals and 22% for the PQ. This means that the CAQ has dropped 19 points - a huge number. Eight of those points have gone to the Liberals and 10 have gone to the PQ. In this regard, the results of the poll are not as negative for the PQ as it would appear at first glance, though it makes them even worse for the CAQ.

But compared to the effect that the PQ hopes Péladeau will have on the race, the numbers might be a letdown. However, perhaps the results are not so surprising. If Péladeau sends the signal that the PQ can win the next election in a big fashion, that might encourage CAQ supporters to instead vote for the Liberals, who have the best shot of blocking the PQ from forming government. This is particularly the case in Quebec City, which is not nearly as pro-independence as other francophone regions in the province. The PQ may have maxed out the gains they could plausibly make in Quebec City already.

The question that the next set of province wide polls will help answer is whether the same effect will occur in the rest of the province. In francophone regions that have historically not been as opposed to sovereignty, Péladeau may give the PQ the kind of boost they are looking for. Nevertheless, this Léger poll suggests that he has the potential to be a polarizing figure. He may boost the PQ somewhat and solidify their support, but if he also encourages CAQ supporters who dislike the PQ more than the Liberals to cast their ballot for Philippe Couillard, his influence may not be as positive as Pauline Marois hopes. We'll soon find out.
Posted by Éric at 11:06:00 AM