No wait, it's a landslide

For the second time in the election campaign in Quebec, a poll by Forum Research (this time reported by the Toronto Star, after the Montreal Gazette was scolded by the MRIA for the way the last Forum poll was contemptuously reported) tells us that all assumptions made about the state of the race in Quebec are wrong. Rather than a close race, the Liberals have soared ahead with a double digit lead. Philippe Couillard is, thus, on track to bettering Jean Charest's majority victory of 2008.

These sorts of numbers give the Liberals a large majority government of 71 seats, with the PQ reduced to 50 and the CAQ to just two, putting them in a tie with QS. The likely ranges now point only to a Liberal victory, with between 61 and 76 seats while the PQ could win only between 46 and 59 seats.

Has the campaign really swung so heavily towards Couillard and the Liberals? The last time Forum reported, they gave the Liberals a two-point edge when both CROP and Léger saw the race as tied or leaning towards the PQ. Léger and CROP both subsequently recorded Liberal gains, so perhaps Forum will be a precursor to further Liberal gains again. But these numbers for the Liberals are rather extraordinary. The party has not been recorded at 45% support in any poll for many, many years. Has the PQ campaign really imploded to such a huge extent?

Considering the unusual nature of this poll in the context of other surveys, I will update the projection this weekend (something I would normally not do) if new surveys from CROP and/or Léger emerge that portray a different picture. 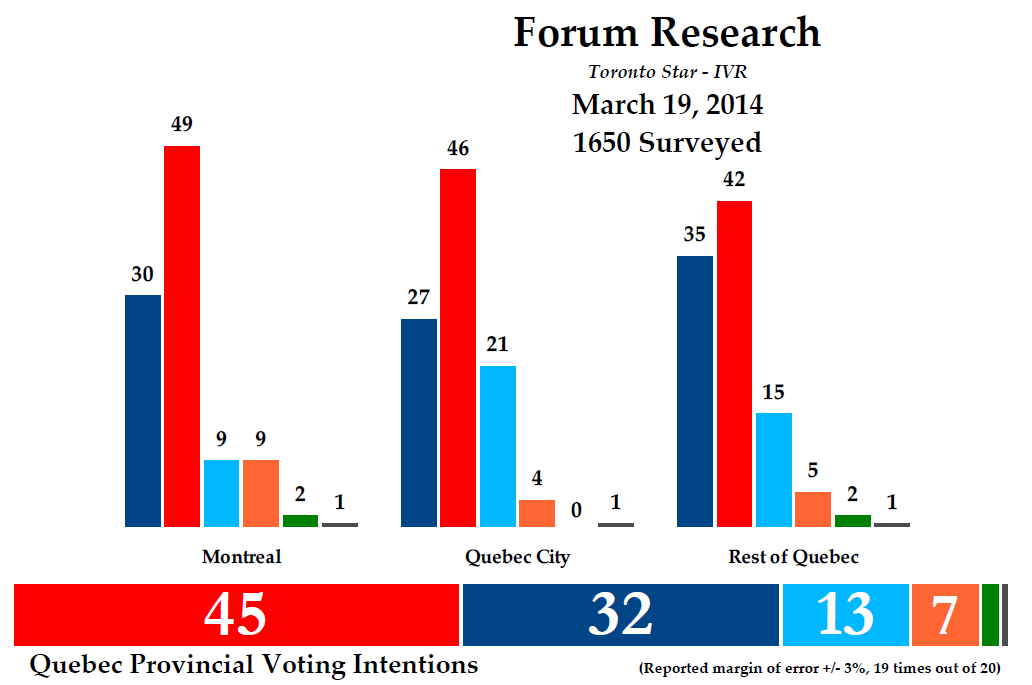 Forum was last in the field on the day of the campaign launch, on March 5. Since then, they have recorded a five point jump for the Liberals to 45% and a six point drop for the PQ to 32%. The CAQ was up one point to 13%, while Québec Solidaire was unchanged at 7%.

Since Forum does not report correctly weighted support levels by language (instead, they report the raw, unweighted, disproportionately distributed numbers) I have left them off the chart.

The poll was conducted on March 19 only. In my view, this is a problem and is one that Forum could easily avoid but continues to choose not to. The firm conducts its polls in one evening over a period of a few hours. What this means is that Forum polled 1,650 Quebecers who happened to be home between, say, 7 PM and 10 PM on Wednesday night.

The question must then be asked. Are Quebecers who are home between 7 and 10 on a Wednesday night representative of Quebecers as a whole? Are they markedly different from Quebecers home on Thursday nights or Tuesday nights, or Quebecers who were not home on this particular Wednesday? Luckily, the Montreal Canadiens were not playing on Wednesday, otherwise the poll might have been conducted among non-hockey fans only. The by-election miss in Brandon-Souris in November 2013 might have been partly caused by the Grey Cup taking place on the same night of the final poll.

That something as minor as this could even be a factor is an example of why polling should not be done on a single day. And with Forum conducting its poll in such a narrow time frame, call-backs are impossible. Telephone pollsters carry out call-backs to try to reach the people they missed when they first called in order to maintain the random nature of the sampling. Otherwise, no attempt is made to reach a representative sample of the population, just a sample of the people home on a particular night. And as Forum uses interactive voice response methodology, which has a response rate of between 1% and 3%, the need to conduct call backs is even greater.

So why not run the poll over three days, for example, instead of three hours? What is being sacrificed to get 'fresher' numbers for no particular reason? I can see the benefits of a flash poll after a big event, such as a debate, but not during an unremarkable period of the campaign.

The poll showed little real movement in Quebec City or the regions, but recorded a big swing in the Montreal area. There, the Liberals jumped seven points to 49%, while the PQ fell eight points to 30%. This was responsible for almost all of the shift in voting intentions province wide.

It wasn't the only big swing recorded. Pauline Marois's approval rating was virtually unchanged at 32%, but Couillard's increased by 10 points to 44%. François Legault's surged by 14 points to 48%, with his disapproval rating plummeting 17 points to 32%. That seems a little extreme.

I can't help but look at this poll with a good deal of skepticism, at least in terms of the precise numbers. The trendline seems consistent with other polls. But we can't definitively say whether the poll is on the mark or not until we get some corroborating numbers. Hopefully, we'll get those soon.
Posted by Éric at 2:46:00 PM