For the first time this year, the Liberals have led in Quebec in a poll by either CROP or Léger. This particular survey, by CROP for La Presse, gives the Liberals a three-point edge over the Parti Québécois. But the PQ is holding steady - it is rather the Coalition Avenir Québec that is losing French-speaking voters to Philippe Couillard's Liberals.

But despite the Liberals' advantage in the popular vote, the PQ's enduring edge among francophones gives the party the edge in seats, with 62 to 57 for the Liberals. But that now puts the PQ in minority territory, though their likely seat range (56 to 70) straddles the line exactly. The Liberal range, at 50 to 66 seats, also puts them over the majority mark of 63 seats, though they are less likely to win a majority government than the PQ.

If those numbers look unusual, consider the results of the 1998 election. The Liberals won the popular vote by 0.7 points, but lost the election by 28 seats. Here, the margin is five seats with a two point advantage. And 1998 is increasingly looking like a good reference: Mario Dumont's ADQ took 12% of the vote in that election, a number that the CAQ could easily find itself with on Apr. 7 (there was no party like Québec Solidaire in 1998, however. Its closest forerunner took just 0.6% of the vote). 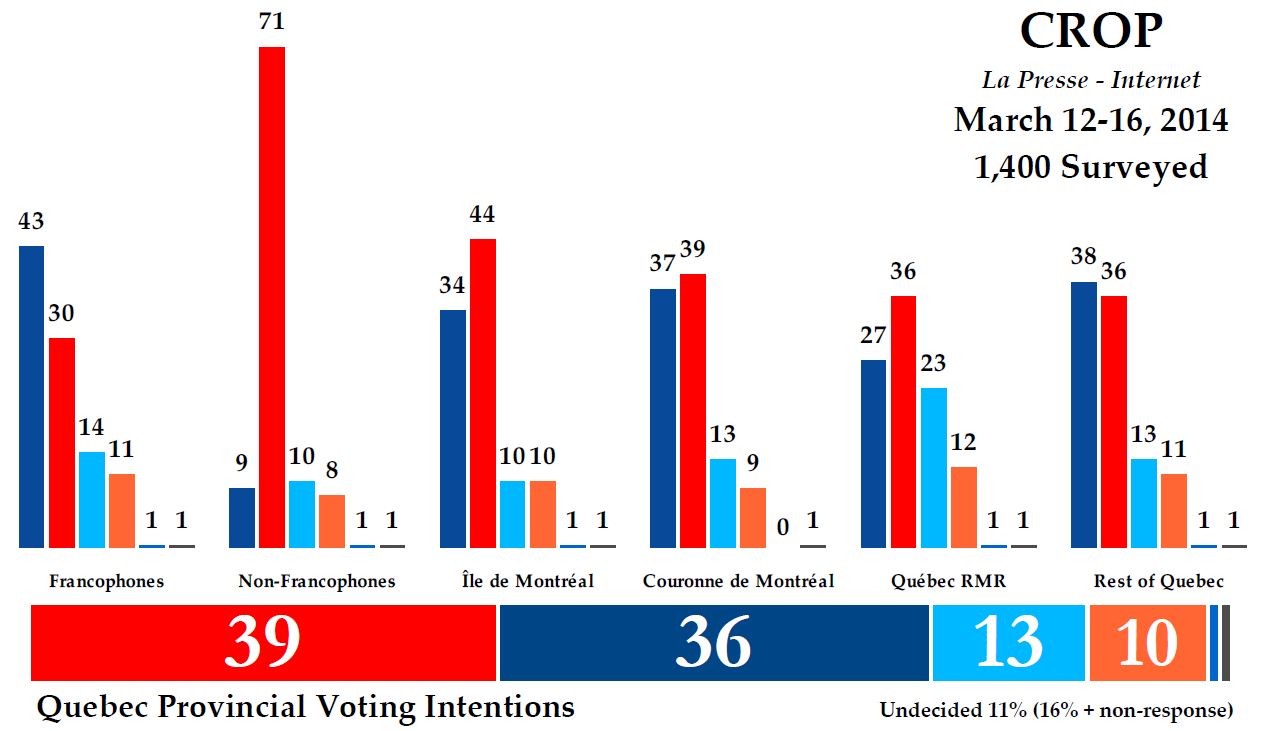 CROP and Léger have been juggling a few sponsors in this campaign. Léger first reported for Le Journal de Montréal and then this past weekend for Le Devoir and The Globe and Mail. CROP now has reported for both Radio-Canada and, this time, La Presse.

Compared to CROP's previous poll for Radio-Canada, conducted Mar. 5-8, the Liberals have picked up three points to lead with 39%. The PQ has held steady at 36%, while the CAQ has dropped four points to 13%. QS was up two points to 10%.

That drop for the CAQ was outside the margin of error, at least the margin that would normally apply to a probabilistic sample. Neither Léger nor CROP has ever had the CAQ at 13% before going back to the founding of the party.

The CAQ dropped most significantly among francophones, falling six points to just 14%. The Liberals were the ones who took advantage, picking up five points to reach 30% among this important demographic. The PQ hardly budged, leading with 43%, while QS was at 11%.

Among non-francophones, the Liberals fell eight points to 71%, with the CAQ holding steady at 10% and the PQ increasing to 9%. QS appears to have picked up the support the Liberals shed among these voters, increasing five points to 8%.

The Liberals lead on the island of Montreal with 44%, followed by the PQ at 34% and the CAQ and QS at 10% apiece (QS needs to be higher to be able to win a third seat). In the suburbs around Montreal, the Liberals increased to 39% while the PQ picked up eight points to hit 37% in the region. The CAQ saw its support cut in half, falling to 13%. QS was fourth with 9% in the region.

The Liberals also led in Quebec City, with 36% to 27% for the PQ and 23% for the CAQ. This generally confirms the two polls we have recently seen in the region from Léger. QS was up five points to 12%, oddly enough their best result in the province.

On who would make the best premier, Couillard moved ahead for the first time in any poll since December, with 27% to 26% for Pauline Marois. The two leaders traded a single point, though, and have been around this level for some time. François Legault was at 14% and Françoise David was at 7% on this question.

The CAQ has been in steady decline since the campaign began, the exact opposite of what occurred in 2012. The Liberals have taken full advantage, while the PQ's vote has been quite steady. If the CAQ continues to drop, the PQ could be in real trouble. But the dynamics in this campaign have been interestingly intertwined. Supporters of the CAQ went to the Liberals, seemingly to block a PQ victory. If a Liberal victory starts to look likely, will supporters of QS (and maybe some from the CAQ) start to move to the PQ?
Posted by Éric at 1:45:00 PM