After two polling firms dropped into the campaign for the first time last week with numbers at odds with those recorded by CROP and Léger, the two Quebec-based pollsters tracking the race, many were looking forward to the next poll from CROP or Léger that would clear things up. This morning, the newest Léger poll for the Journal de Montréal confirmed what those polls had been showing: the Liberals have moved ahead of a faltering Parti Québécois.

In terms of seats, the big Liberal majority is now a small one. The party is projected to win 65 seats with these levels of support, against 55 for the PQ, three for the CAQ, and two for QS. The likely ranges lean heavily towards a Liberal victory (and mostly a majority one), but do envision the possibility of a PQ minority.

A few notes on the projection. It has been updated to reflect the finalized list of candidates. The estimated support levels of the Greens and the 'others' are now locked-in. These support levels are determined by the amount of support these parties and independent candidates averaged per riding in 2012, multiplied by the number of candidates they have nominated. As the Greens have less than a half-slate of candidates (44 out of 125), their polling levels will no longer be taken into account. The party averaged 1.9% support in each riding they had a candidate in 2012, so with such a reduced slate of candidates the party is now estimated to take 0.7% support. That may flicker by a tenth of a percentage point as the model rounds things up or down to reach 100%. The same goes for support for the other parties and independents. Option Nationale's position in the polls will be still tracked, as they have nominated 116 candidates. 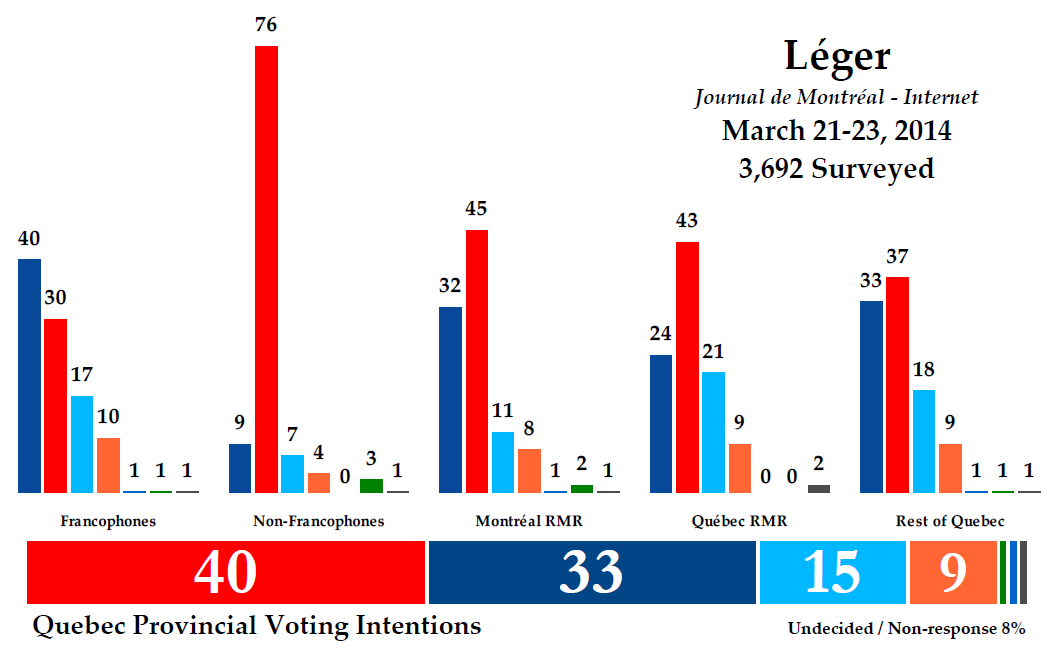 Léger was last in the field between March 11-13, for Le Devoir and The Globe and Mail. Since that poll, which was conducted before the first debate, the Liberals have picked up three points to move into the lead with 40% support. The PQ dropped four points to 33%, while the CAQ was up one point to 15%. Québec Solidaire was unchanged at 9% support.

The drop in support for the PQ is outside the margin of error (or would be, if this were a probabilistic sample). It is also the lowest that Léger has pegged the PQ to be at since early December 2013, while 40% is the best Liberal score in any Léger poll in several years (CROP had the party at 40% in August 2013).

The poll confirms the findings of Ipsos Reid, which had the two parties at 37% and 32% before the debate with a much smaller sample. And, interestingly, the Léger numbers for the PQ and Liberals match exactly the Ipsos Reid estimation of support among those most likely to vote.

As for the Forum poll, Léger does agree with the support level of the PQ. But the Liberals were at 45% in that poll, which seemed high at the time and still seems to have been a bit of an outlier. But Forum did catch that the Liberals were on the upswing.

The source of the PQ's drop was among francophones, particularly those in the regions outside of Montreal and Quebec City. The PQ fell four points to 40% support among French-speaking Quebecers, while the Liberals were up to 30% and the CAQ to 17%. QS was steady at 10% support.

Léger did a massive poll, allowing them to break down provincial support region-by-region. I was able to obtain the results broken down by Léger's usual regions, in order to be able to compare apples-to-apples (and use the right data for the model).

In Quebec City, the Liberals also had an uptick to 43%, while the PQ dropped to 24% and the CAQ remained relatively stable at 21%. QS was at 9% here.

In the regions of Quebec, the Liberals were up to 37% while the PQ dropped seven points to 33%, a significant decrease. The CAQ was at 18%, while QS was at 9%.

If we look at the regions reported by Léger, we get a good idea of where the parties stand. The Liberals led in the Capitale Nationale (42%), the Mauricie/Centre-du-Québec (35%), Estrie (38%), on the island of Montreal (50%), in the Outaouais (49%), in Chaudière-Appalaches (44%), in Laval (53%), and in Montérégie (37%). None of these are particularly surprising, though the strong numbers in Laval and Montérégie could spell trouble for more than a few PQ incumbents. The Liberals were also competitive in the Saguenay-Lac-Saint-Jean/Côte-Nord with 36%, suggesting Philippe Couillard may have a decent shot of election in his Roberval riding.

The PQ was ahead in the Bas-Saint-Laurent/Gaspésie (46%), the Saguenay-Lac-Saint-Jean/Côte-Nord (43%), Abitibi-Témiscamingue (47%), and Lanaudière/Laurentides (45%). Again, none of these are very surprising, though the PQ has definitely taken advantage of the CAQ's drop north of Montreal. The PQ was only a handful of points behind the Liberals in Mauricie/Centre-du-Québec (31%), Estrie (33%), and Montérégie (36%) so there will be plenty of close races.

The CAQ's only pocket of strength was in Chaudière-Appalaches, where the party registered 28%. That bodes well for a handful of their incumbents, but with no better than 23% support anywhere else only a handful of CAQ MNAs will survive. The party is tied with the Liberals for second in Lanaudière/Laurentides (where François Legault will have a hard time being re-elected), but trails the PQ by 22 points.

For Québec Solidaire, the island of Montreal was not even their best region (9%, the party had 12% here in 2012). They scored double-digits in the Bas-Saint-Laurent/Gaspésie (13%), Capitale Nationale (10%), Mauricie/Centre-du-Québec (10%), Estrie (13%), and Abitibi-Témiscamingue (13%), but with the small sample sizes this does not mean much.

Option Nationale did not score more than 1% anywhere, while the Greens were at 4% on the island of Montreal, where they actually do have a half-decent slate of candidates (numbers-wise, at least).

On who would make the best premier, Philippe Couillard jumped five points to 31%, his best showing ever, while Pauline Marois slipped to 25%. Legault was at 16%, while Françoise David was at 8%, no real change. Among francophones, Couillard was up to 23%, while Marois was still ahead at 30%.

Interestingly, Léger asked Quebecers whether they would prefer a PQ or Liberal government. While 48% said they preferred a Liberal government, 41% preferred a victory by the PQ. This is where strategic votes may come into play. On this score, however, the PQ might be slightly favoured. Among CAQ supporters, 51% preferred a Liberal victory against 34% who preferred a victory by the PQ. Among QS supporters, however, that split 62% to 21% in favour of the PQ. That means that, among CAQ and QS supporters, the PQ could potentially grow by 10.7 points, compared to 9.5 points for the Liberals. Narrowing the gap by one or two points could bring the Liberals down to minority territory.

But that is what the PQ appears to have been reduced to, after starting the campaign the odds-on favourite to win. There is still time to turn things around, but that time is running out. The Liberals were only out of power for 18 months after holding office for almost 10 years, and there may be a backlash if Quebecers decide they aren't ready to hand the reins of a majority government back to the Liberals for another four years. But the PQ has salted the earth to such a large degree over the last few weeks that perhaps only Legault and the CAQ stands to benefit. The campaign may not be over yet.
Posted by Éric at 11:51:00 AM