Released between Christmas and New Year's, the latest polling numbers out of Manitoba may have been over-looked. The New Democrats should hope they were, because they were horrible. Probe Research shows Brian Pallister's Progressive Conservatives holding a gaping 22-point lead over the governing NDP. No party has won an election by such a margin in over 60 years. 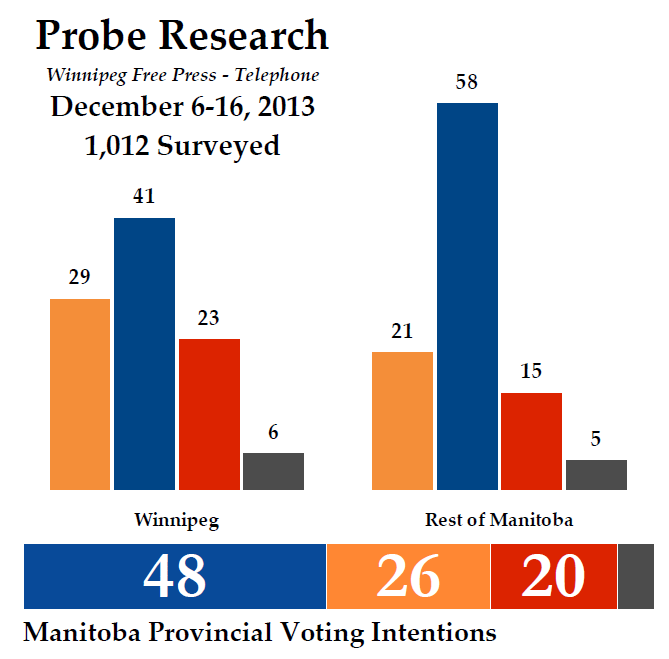 Probe was last in the field for the Winnipeg Free Press in September, and since that poll they have recorded a five-point increase for the Tories. They now lead with 48%, while the New Democrats have dropped three points to 26%. The Liberals held steady at 20%, while 6% of respondents would vote for another party (mostly the Greens).

Of note is the large number of undecideds: 22%. That is a nine-point increase over the last two polls from Probe. Because of that, the shifts in support since September for any of the parties among decided voters do not seem statistically significant, though the increase in undecideds certainly is.

These numbers are remarkable since they represent the best and worst results for the PCs and NDP, respectively, in many years. In the space of 12 months, the NDP has shed 13 points of support. The Liberals have benefited, picking up nine points. The PCs have gained six.

It has put them in a strong position. They Tories led by 22 points among men and 20 points among women, while they were ahead in all age groups, education levels, and income brackets.

The party is also in front in Winnipeg, with 41% to 29% for the NDP (down seven points since September). The Liberals ran a strong third in the capital with 23%. The PCs were in front in every part of Winnipeg except the downtown core, where the NDP remains in front.

With these levels of support, the Progressive Conservatives would win a landslide with 42 seats to just nine for the NDP and six for the Liberals.

Almost all of the NDP and Liberal seats would come in the capital, while the Tories would sweep all of southern, rural Manitoba.

These are striking numbers, particularly since elections in Manitoba tend to be close affairs. As mentioned at the outset, no party has won an election by such a large margin as 22 points since 1953, so it follows that these numbers would produce an unusual result (but recall that the model correctly called 56 of 57 ridings in the 2011 election).

One imagines, then, that this could be rock-bottom for Greg Selinger's NDP and that they have nowhere to go but up. The Liberals have a new leader in Rana Bokhari, but she is not well known and it seems unlikely that she will replace the NDP as the alternative to the Tories. Pallister is in an enviable position, especially in facing a government that has been in power for 15 years and will have been in power by 16 or 17 years by the time Manitobans are next called to the polls.
Posted by Éric at 10:03:00 AM