Believe it or not, while pollsters were furiously surveying Albertans throughout the month of April, they also managed to conduct some 10 national and two regional federal polls, surveying over 23,000 Canadians in all. The results mark a continuation of a trend we saw last month, namely the Conservatives holding the lead as the Liberals falter. 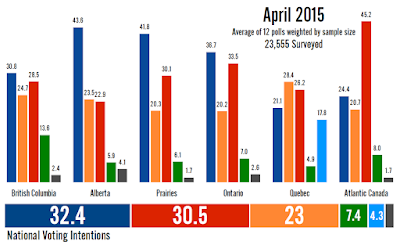 The Conservatives averaged 32.4% support in the month of April, up a bare 0.1 points since March. Removing rounding errors, this was their first outright lead since March 2013 - the month before Justin Trudeau became Liberal leader.

The Liberals were down one point to 30.5%, their worst since March 2013. It was also their ninth consecutive month of decrease or stagnation, from a high of 39%.

The New Democrats made the biggest jump, picking up 1.8 points to average 23% support, their best since October 2014.

The Greens were down 0.5 points to 7.4%, while the Bloc Québécois was also down 0.5 points, to 4.3%. Another 2.4% of Canadians said they would vote for an independent candidate or another party.

The shift in provincial voting intentions in Alberta was echoed somewhat at the federal level, as the Conservatives plummeted 5.4 points to just 43.6%. That is their lowest I have on record since at least January 2009, and likely very long before that. The New Democrats were up 6.3 points to 23.5%, their best on record, even better than in 2012 when the party was leading in national polls. The Liberals, down 1.2 points to 22.9%, fell to third place for the first time since January 2013. The Greens were down 0.7 points to 5.9%.

In Atlantic Canada, the Liberals were down 3.7 points to 45.2%, their worst since the end of 2013. The Conservatives were unchanged at 24.4%, while the NDP was up three points to 20.7%. The Greens were up 0.8 points to 8%, their best since August 2011. Coming just before the Green Party elected its first MLA in Prince Edward Island, this might not be a coincidence.

Based on these support levels, the Conservatives would win about 143 seats, down one seat from March. The Liberals would win 113 seats, a drop of four seats, while the NDP would win 79, a gain of nine. The Greens and Bloc would win two and one seats, respectively.

The Conservatives dropped seats in Alberta, but made them up in Ontario.

The Liberals were down in Ontario and Quebec.

The New Democrats made gains in Alberta and, especially, Quebec.

This was a bad month for the Liberals. Though the Conservatives widened their national lead, it was primarily by default. The Tories dropped significantly in Alberta and only made modest gains in the rest of the country. The Liberals, though, were down by more than a point in Alberta, more than two points in Ontario, and almost four points in Atlantic Canada.

The beneficiary was the NDP, with big gains in Alberta, Quebec, and Atlantic Canada, as well as respectable pick-ups in the Prairies and Ontario. A drop in British Columbia is a bit of a problem, as it should be a decent province for the party, but this is the first month since July 2012 that the NDP has averaged at least 20% in every region of the country. The question is whether they can maintain these strong numbers - but the party is certainly positioning itself well for the coming election.
Posted by Éric at 10:15:00 AM