What could be the last poll of the campaign was out this evening, from Insights West. Like the other polls, it gives the NDP a very comfortable lead over Wildrose and the PCs, though it does suggest the race in Calgary could be close enough to force some tight contests. But what is most revealing may be the leadership numbers. 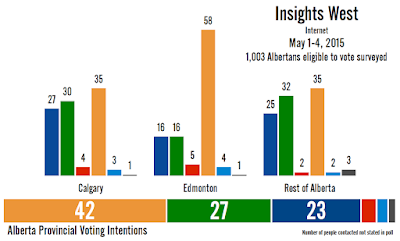 Insights West was last in the field between March 27-30, so before the campaign began. That doesn't make it useful from a trends perspective.

The poll gave the NDP 42% support, with Wildrose trailing at 27% and the PCs at 23%. This falls well into line with the other polls we have seen (below).

the poll awarded 4% to the Liberals, 3% to the Alberta Party, and 2% to other parties. A total of 9% of the sample was undecided.

As the poll was conducted online, no margin of error applies. See the link above for full details on the questions asked.

The NDP led in all three regions of the province. In Edmonton, it had 58% support to 16% for both the PCs and Wildrose.

In Calgary, the NDP had 35% support, against 30% for Wildrose and 27% for the PCs. Of the three polls released since yesterday, this is the best one for both the Tories and Wildrose here.

Fully 82% of respondents agreed it was time for a change of government, while just 35% agreed that they would be upset if the NDP won.

This makes the current climate very different from the 2012 Alberta or 2013 B.C. elections. Rachel Notley is much more popular than either Danielle Smith or Adrian Dix were in those campaigns. 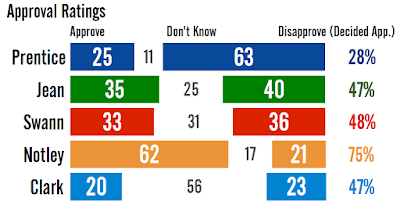 Insights West found that Notley's approval rating was an astounding 62%, with just 21% of Albertans disapproving of her. Apart from Jim Prentice, she scored the lowest on the number of 'unsures'.

The other leaders had mixed ratings, with Brian Jean posting a 35% to 40% split, David Swann having an approval rating of 33% to 36% disapproval, and Greg Clark splitting the question 20% to 23%. A majority of Albertans did not have an opinion about the Alberta Party leader.

And just like other polls have shown, opinion has deeply soured on Prentice. Just 6% of Albertans said their opinion of him had improved during the campaign, compared to 52% who said it worsened. By contrast, 52% of Albertans said their opinion of Notley improved, while just 11% said it worsened. These are very consistent numbers with what we've seen from ThinkHQ and Léger last week.

Notley beat Prentice by a wide margin on being the better leader on health care, the environment, education, crime, housing and poverty, and government accountability. She was narrowly ahead, 28% to 24%, on the economy and jobs, and narrowly behind, 23% to 27%, on energy and pipelines. This is a little asterisk to keep in mind tomorrow night.

But on who would make the best premier, Notley scored 37% to just 18% for Prentice and 13% for Jean. Christy Clark and Alison Redford did not trail so far, nor were their approval ratings as low as Prentice's, the day before their victories.

EKOS, in the field as recently as yesterday, adds to the trend of the Alberta New Democrats holding their own and, seemingly, in little danger of a last minute slide. 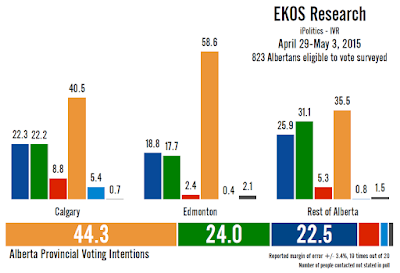 EKOS's previous poll was last in the field between April 25 and 29.

All margin of error shifts, but certainly arguing against a softening of NDP support and a rebound by the Tories. They are almost 22 points behind the NDP. How plausible is it really to still consider this a three-way race? We wouldn't in any other election.

The Liberals were down 0.7 points to 5.6%, while the Alberta Party was down 2.4 points to 2.2%. Interestingly for them, their support dwindled to almost nothing everywhere but Calgary, where their leader Greg Clark does have a shot (the projection currently awards his party a seat).

These regional numbers are very similar to what Forum found in its May 2 poll below.

One of the biggest polling issues with the 2012 Alberta election campaign is that too many pollsters dropped out of the field too early. We'll never know if they would have captured anything different had firms like Léger, ThinkHQ, or Abacus Data stayed in the field over that final weekend.

Luckily, it seems that some pollsters are not going to make the same mistake this time. The last round of polls dropped out of the field on Wednesday, leaving Albertans almost week to mull things over. The new round of polls has continued in the field throughout the weekend, and might even include some interviews from today.

Two post-April 29 poll have already been published or are on their way. One, conducted by Forum Research and published yesterday on the Edmonton Journal website, was in the field on Saturday. The other is forthcoming from EKOS Research. Frank Graves hinted at his numbers yesterday on Twitter, and they showed the NDP's lead growing - not shrinking. 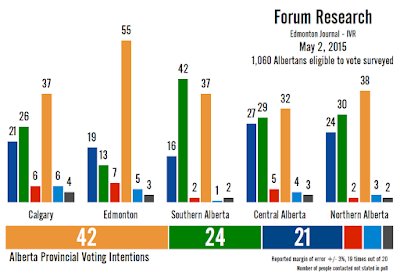 Forum was last in the field on April 23, when it was the first mainstream pollster to see the NDP moving into majority territory.

The NDP led in this new poll with 42%, up four points from the previous survey. Wildrose was down one point to 24%, while the Progressive Conservatives were up one point to 21%.

The Liberals were down two points to 5%, while the Alberta Party was down one, also to 5%.

Another 3% said they would vote for another party (down two points).

None of these shifts were outside the margin of error, though the results look a lot like the polls we saw last week.

The numbers argue forcefully that the NDP's lead is going nowhere. There was much speculation that the round of polls published on Thursday and Friday showing the NDP in majority territory would have an effect on people's voting intentions. Instead, it seems to have had no effect. If the PCs were going to stage a comeback, we'd see it somewhere in the trends. Trailing by 21 points is not something that can be overcome in a matter of days. Even Wildrose's lead in 2012 was just eight points, on average, in the final week.

The New Democrats led in the poll in Edmonton with 55%, followed by the Tories at 19% and the Wildrose at 13%. These numbers were mostly unchanged.

The NDP was also ahead in Calgary, moving up to 37%. They were followed by Wildrose at 26% and the PCs at 21%, both of which were stagnant. Even Calgary might not turn out to be the three-way race many people are expecting.

Again, we'll have to wait and see what happens on Tuesday. But a lot of the prognosticators saying that the NDP doesn't have the map to win a majority government are ignoring these sorts of numbers. In this poll (which admittedly has small regional samples, but which is in line with others) the NDP has at least 32% outside of the two main cities and is ahead by double-digits in Calgary. If those numbers hold, then they most certainly have the math to win a majority government. These things can happen - would anyone really have considered the NDP a lock to win all of conservative Quebec City's ridings in the last federal election? If the NDP can win Quebec City, it can win Calgary.
Posted by Éric at 9:53:00 AM