Quebec back in the NDP fold?

Adding (with an exclamation mark) to the narrative of a major NDP surge, the latest poll from CROP for La Presse showed the New Democrats up 11 points in Quebec, the biggest one-month shift in voting intentions recorded by CROP in over two years. 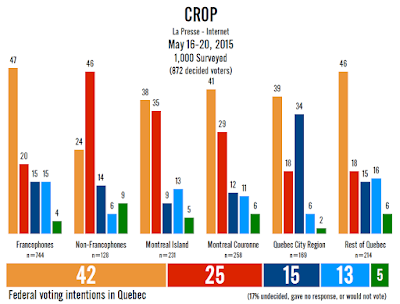 That increase took place since CROP's last poll of April 15-20, and propelled the NDP into the lead with 42% support.

Undecideds numbered 10% of the entire sample, with an additional 7% that either gave no response to this question or said they would not vote.

The last time that CROP recorded a shift larger than this 11-point jump was between March and April 2013, when Justin Trudeau became Liberal leader (the party doubled its support from 19% to 38% at the time). And while CROP has generally had the NDP a little higher than other polling firms, it hasn't had the New Democrats this high in Quebec since June 2012 - in fact, no one has.

Nevertheless, these numbers are remarkable. If repeated on election day, the New Democrats would likely win between 57 and 62 seats. The Liberals would take between 11 and 15, the Conservatives between four and six, and the Bloc would be shut out.

The shift in voting intentions has occurred primarily among francophones. The NDP is up 13 points among these voters to 47%, their best score since April 2012. The last time the party was consistently polling around that level was in the fall of 2011.

The Liberals were down slightly to 20%, while the Bloc was down seven points to just 15%. That is their lowest score since the 2011 election. The Conservatives were also down, putting them in a tie with the Bloc among francophones.

There was more interesting movement in the rest of the province. The Conservatives lost the lead in Quebec City for the first time since November, with 34% support. By comparison, in the last four polls the party had been consistently growing, from 37% to 38%, to 41%, and finally to 42% in April. This may be a sign that the Tory surge in Quebec has abated. The New Democrats were in front instead, with 39%. The Liberals were at 18%.

The Liberals dropped significantly in the regions of Quebec, falling to just 18% support. The NDP moved dramatically into the lead with 46%, while the Bloc only managed 16% support in this region (where both of its current MPs are located). But the drop for the Liberals is what is noteworthy - it is their worst result since April 2012. To put it into context, the Liberals averaged 36% in the 'regions of Quebec' in earlier CROP polls conducted in 2014 and 2015.

On who would make the best prime minister, Thomas Mulcair was first with 37%. That was up 11 points from last month, and his best result since before Justin Trudeau was added to the list. At 16%, this is Trudeau's lowest score as leader in a CROP poll. Stephen Harper's 14% was typical.

If these numbers hold, the New Democrats would be very well placed to supplant the Liberals as the most viable alternative to the Conservatives in the rest of the country. A dozen seats or so for the Liberals in Quebec would be disastrous for their national ambitions.

But we should not get ahead of ourselves. Polling in Quebec is suddenly looking a little volatile. Yes, the NDP's 42% is not dissimilar from the 36% EKOS gave the party in its May 6-12 poll, or the 38% Forum awarded the NDP in its May 12-13 poll. But the most recent EKOS survey pegged the NDP at just 29% in Quebec. The sample was smaller, at under half of CROP's, but even so the respective margins of error (theoretical or otherwise) do not bridge the gap. Quebec is a province to watch closely yet again.
Posted by Éric at 9:07:00 AM