This week's EKOS poll, with the preliminary results leaked to the Ottawa Citizen before EKOS was forced to publish their final results a day early yesterday, has a lot of tongues wagging in Ottawa. Why? The poll put the New Democrats right in the middle of a three-way race, with the Liberals bringing up the rear. Are we in the midst of a re-alignment, or is this a blip?

This far out from the election, the projection still turns like a big ship (as it should at this stage). Nevertheless, it has recorded a sharp uptick in NDP fortunes with the addition of this new EKOS poll (as well as an Insights West poll for British Columbia, which had similarly good news for the NDP, and the previous week's EKOS poll).

Both the Tories and Liberals have dropped since last week's update. The Conservative low range has fallen by eight seats from 129, and its high range has dropped five seats from 164. The majority mark is now 11 seats away at the high end, rather than just six last week.

There was word from Twitter that a Forum poll also showing a three-way race is forthcoming, and I have heard of an internal poll showing the same thing (take this with caution, though, since there could be plenty more internal polls showing no such thing that I have not heard about). Coupled with the Insights West poll in British Columbia, a Forum poll in Ontario showing gains for the provincial NDP (due to Patrick Brown winning the PC leadership, Forum implausibly explains), and the party's big win in Alberta last week, things are looking up for the New Democrats.

We'll only know if this is a momentary blip or something enduring in the coming weeks or months. If it is a blip, we'll know sooner rather than later. 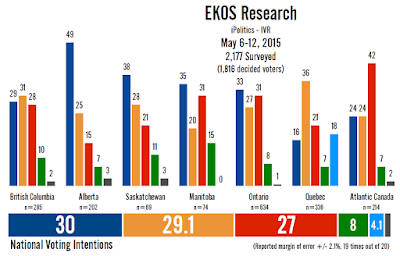 But let's take a look at this EKOS poll in detail.

The Conservatives led with 30% support, virtually unchanged from where the party stood in EKOS's polling the previous week.

The New Democrats were up a remarkable 4.9 points, vaulting them into second place with 29.1% support. The Liberals were down 2.6 points to 27%, though that shift was just inside the margin of error.

That last number is noteworthy, since EKOS's previous poll from April 29-May 5 had support for the Others at 4.5%. That was an unreasonably high number, and for EKOS to now have them below 2% is certainly out of character. I'm not sure why that happened this week, but it freed up 2.7 points that seems to have gone to partly to the Greens and mostly to the NDP.

This poll sets off alarm bells because of the dramatic shift it is highlighting - not in the sense that it makes the poll unreliable, but in the sense that we need to sit up and pay attention to what is happening. Is it an outlier or the first poll to catch a new trend?

As it marks the first time the Liberals have placed in third in any poll since March 2013, over two years ago, it definitely stands out. And this is indeed a bad poll for the Liberals, as they lead only in Atlantic Canada. Their scores were low in Quebec and Alberta. They were also low in Ontario, though so were the Conservatives.

The Tories certainly aren't coming anywhere close to a majority government with 33% support in Ontario and 29% in British Columbia. EKOS also seems to be pointing towards a deflating Tory balloon in Quebec. Something to watch as well.

The NDP numbers were only unusually good in Ontario and Quebec. The party has not held such a wide lead in Quebec for some time, and being in a close three-way race in Ontario is something new. The party was already competitive in B.C. and doing well in Alberta, so those are well within the norm. It is the surge in Ontario and Quebec that is behind this second place finish for the NDP, so we need to keep an eye on the NDP's numbers in these two provinces over the next few weeks.

But if these numbers became reality on election day, the House of Commons would look like nothing we've ever seen before. The Conservatives would win about 131 seats, the NDP would take 110, and the Liberals would win 94, with the Greens and Bloc winning the remaining three seats.

It would be close enough that, if these were what the polls were showing the day before the election, the model would project 113 to 153 seats for the Tories, 98 to 131 for the NDP, and 71 to 108 for the Liberals. That means the NDP would, potentially, be able to win a plurality of seats.

Is this where we are heading? This is such a large change in the political landscape that we need to stand back and exercise a little patience. Maybe these numbers are completely real, and we're now in a three-way race. Maybe these numbers are just a bout of post-Alberta zeal that will fade away in a matter of weeks. Maybe no polls aside from EKOS and the (apparently) forthcoming Forum will show these kinds of results, and we'll return to the status quo. For now, we just don't know. Watch this space!
Posted by Éric at 11:15:00 AM