Redemption for the pollsters, revolution for Albertans

It was an historic night in Alberta, as the Progressive Conservative dynasty was cut short at 43 years and Albertans elected an NDP government for the first time. And they did so in dramatic fashion.

Others will parse what this means for Alberta and the New Democrats more generally. But let's talk about how the polls did.

The sigh of relief you might have heard was from pollsters from coast-to-coast. Whether or not they were involved in either the 2012 Alberta or 2013 B.C. elections, the credibility of every pollster was chipped away by those misses. With the success last night, the ghosts of the 2012 result have finally been put to rest.

It was all the more a relief because it was Alberta, and because what the polls were saying could happen was so outlandish that everyone bent over backwards to try to explain why they were wrong. There were a lot of people ready to gloat last night before the votes were counted. It was a terrifying prospect.

But in the end, as I pointed out in my final analysis, the polls could argue for nothing but an NDP landslide. They were right. Individual pollsters had good nights. They were even better in the aggregate - though what they missed on, as marginal as it was, is revealing.

I was pleased with how ThreeHundredEight.com's projection performed, and I'll get into that more below. But one thing I was disappointed with was the assumption I made about the support of the Liberals and the Alberta Party. I penalized them for not running full slates, and distributed those lost votes to the other parties proportionately. This had the effect of boosting, above all, the NDP, and overall made the projection less accurate than it could have been.

As you can see, an adjusted projection would have performed better than any pollster except Léger. With the adjustment, ThreeHundredEight.com finished fourth.

The winner of the night was Léger, with a total error of just 1.6 points per party (for the purposes of this calculation, I've lumped AP together with the others). A bit of luck played into this, though, as Léger's final poll was out of the field seven days before the vote. It was the only pollster that was not active over the final weekend to not finish behind those who were.

Only its estimates for the Liberals and other parties was outside of the (theoretical) margin of error, and Léger was one of only two pollsters to put the Progressive Conservatives in second place.

This is an important point, as I think it is very revealing of what happened last night. All but Léger under-estimated PC support, by margins of four to eight points. It is unlikely to be coincidence. The Tories either benefited from better turnout (relatively speaking), had harder-to-reach supporters, or experienced a bit of a ballot box boost that might have been worth some four to five points. I think a combination of all three is likely.

Insights West and EKOS Research also had good nights, though both had the PCs outside the margin of error and EKOS had the NDP a little high.

Forum Research and Mainstreet Technologies performed well, but both had the NDP high and the PCs low.

Ipsos Reid had the Liberals too high and the PCs too low, while ThinkHQ only had the NDP within the margin of error. Return on Insight had way too much support for the Liberals and other parties, which had an effect on their overall estimation.

But Ipsos Reid, ThinkHQ, and Return on Insight were out of the field a week before the vote, so they may have simply stopped polling too early to catch a collapse in Liberal support that benefited the Tories (though Léger did not have the same problem). They get a bit of an asterisk.

Nevertheless, for the worst performance to be an average error of just 3.8 points per party is absolutely stellar. And no pollster presented a narrative that was wrong. They all suggested the NDP was headed towards victory, and probably a majority one, while Wildrose and the PCs would fight it out for second place. In the end, they under-estimated the Tories in the popular vote, but their view that Wildrose would fill the Official Opposition role proved correct. Albertans were not misled by the polls whatsoever.

A few other revealing insights from these polls: all but Insights West and Forum Research over-estimated the Liberals, to the tune of one to six points. So perhaps my assumption that this is what would happen was not wrong (it was just too penalizing).

Wildrose was estimated just about correctly by everyone, and certainly in the aggregate. But why was Wildrose able to win more seats than the PCs, despite winning fewer votes? 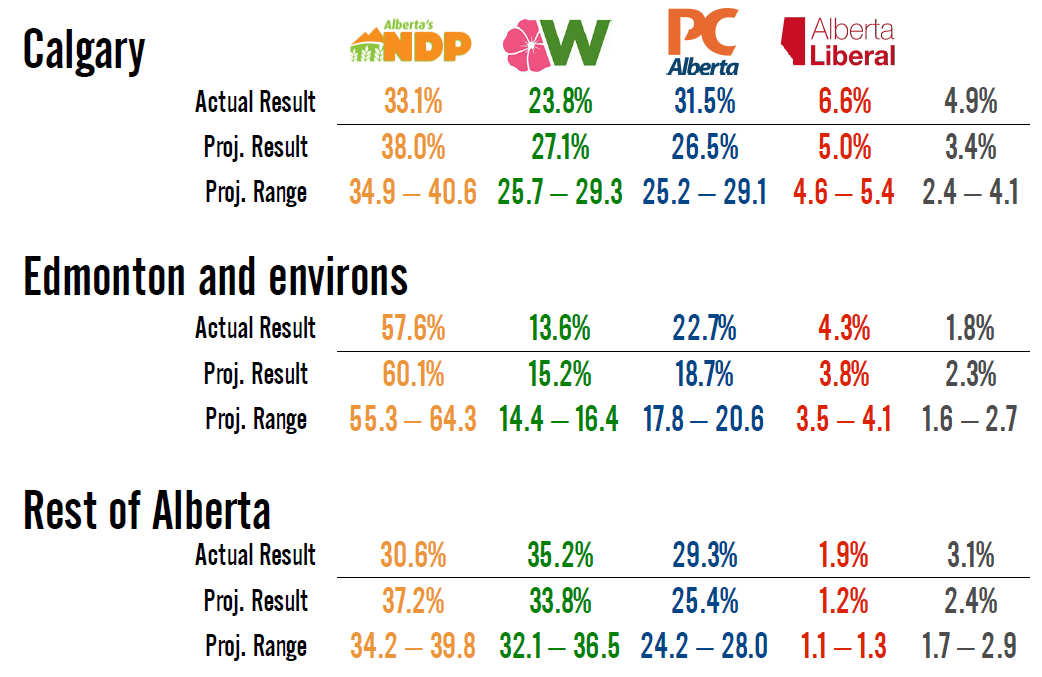 Wildrose benefited from a very efficient vote outside of the two main cities.

But despite this performance by the PCs in Calgary, they just didn't win many seats out of these numbers. With only a 1.6-point advantage over the PCs, the NDP managed to win 14 or 15 seats in Calgary, with the PCs winning just seven or eight. The Liberals won one and the AP won another of the 'Calgary'-named ridings.

Why did I say 14 or 15 seats? Oh, nothing. Just that the riding of Calgary-Glenmore had a freaking tie at 7,015 votes apiece for the PC and NDP candidates!

The New Democrats dominated Edmonton, taking 57.6% of the vote. That was just about as expected. The PCs over-achieved a little at 22.7%, while Wildrose under-achieved at 13.6%. Probably not too much of a surprise - in both Calgary and Edmonton there seems to have been a small coalescing of the conservative vote in the PCs' favour.

In the rest of Alberta, though, there was no such coalescing. And that was the death-knell for the Tories. Wildrose won the rest of the province with 35.2%, just about as expected. While the PCs did take a little more of the vote than projected, with 29.3% in this region, they still finished in third. The NDP dropped from a range of 34%-40% to 30.6%, but it was enough. The party won a few rural ridings, as well as sweeping Red Deer and Lethbridge. The PCs just came up short everywhere. Their uniform support was disastrous when the NDP had the advantage in the cities and Wildrose everywhere else. 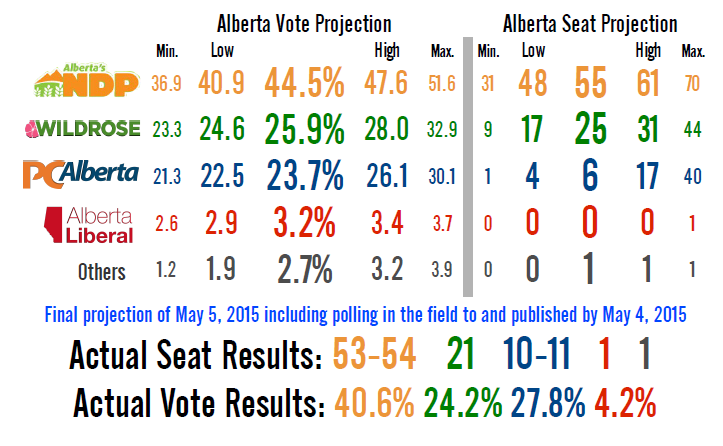 Overall, I was very happy with the performance of the projection. All parties but the Liberals (who nevertheless had a maximum of one seat) fell within the likely ranges, and very comfortably so.

The NDP and Wildrose fell just short of the low range in the vote projection (but within the minimum range), and the Liberals outside of the maximum range, but this was in large part due to my penalizing of the Liberals. The PCs fell within the high-to-maximum range. No party but the Liberals ended up outside the 95% confidence interval anywhere, which is a very happy result.

The model did very well at the riding level. The winner was called correctly in 74 to 75 ridings (depending on how Calgary-Glenmore, projected to go NDP, turns out), for an accuracy rating of 85% to 86%. This is a good result considering the number of incumbents who were defeated.

More importantly, the ranges identified the potential winners in 80 to 81 ridings, for an accuracy rating of 92% to 93%. The average confidence in the ridings that were missed was just 63% to 64% (and four of them were 50/50 toss-ups), and the margin in these incorrect ridings averaged just 1,033 votes.

This election was an usual example, though, of the model actually doing slightly worse with the real results plugged into it. This, too, is revealing. It shows just how inefficient and unlucky the PCs were. 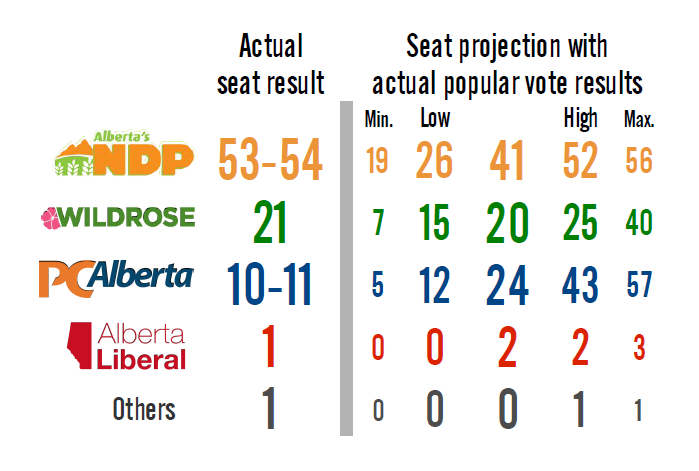 Had the polls been exactly right, the projection would have awarded 26 to 52 seats to the NDP, 15 to 25 to Wildrose, 12 to 43 to the PCs, zero to two to the Liberals, and zero to one for the other parties.

Many of the errors would have occurred in Calgary, giving NDP seats to the PCs. Again, this demonstrates how inefficient the PC vote was in the city. Nevertheless, the correct winners would have been identified in the likely ranges in 79 of 87 ridings, for an accuracy rating of 91%. That is a perfectly acceptable result.

This is where I think post-mortems using seat projections come in handy. It tells us a lot about what happened. The PCs did a lot worse than they should have in many ridings, while the NDP did a lot better. Wildrose performed up to expectations.

Kudos go to the pollsters, who called this election boldly and correctly. Lesser men and women would have balked at re-entering the field in the final days in such an unusual campaign. But because they did, we knew that the NDP was on track to win a majority government. People just needed to see it to believe it.
Posted by Éric at 12:12:00 PM