Without Wildrose or a divided right, the Alberta NDP would have still won (updated)

The only reason that the Alberta New Democrats won last month's provincial election is because the vote on the right was split between the Progressive Conservatives and Wildrose. Or, at least, that is what many people have said. Here are a few examples of that. It certainly feels right. But it isn't.

(I've added an update to the end of this post to clairfy some things.)

The New Democrats captured 40.6% of the vote, with the PCs taking 27.8% and Wildrose capturing 24.2%. If you add up the PC and Wildrose vote, seeing as they are both conservative parties, you get 52% and 59 seats. That beats the NDP, even if you give them the votes of the Liberal and Alberta parties.

Of course, the math is not as simple as that. We don't even need to break out a calculator. We can just look at Alberta's history. If the NDP's victory was an artificial one, we should expect to see multiple cases of an opposition party winning at least 40.6% of the vote and losing against a united right.

But only four times in Alberta's 29 provincial elections has a party taken more than 40.6% of the vote and fail to form government: Harry Strom's Social Credit in 1971 (41.1%), Andrew Davison's Independent Citizens Association in 1940 (42.5%), and Edward Michener's Conservatives in 1917 (41.8%) and 1913 (45.1%). That we have to go back 44 years to find the last example, when the political dynamics of the province were completely different, shows how this line of thinking falls flat.

Nevertheless, this isn't the smallest government to take power. Ralph Klein won a smaller share of seats in 1993, as did Ernest Manning in 1955, Brownlee in 1930, and Arthur Sifton in 1917.

By historical standards, then, the NDP's victory is somewhat exceptional. But generally speaking, if you get 41% of the vote in Alberta you'll win the election.

More compelling is the data from the 2015 vote. The idea that the PCs and Wildrose share the same voter pool is simply wrong. The right wasn't divided. Rather, the anti-PC vote was divided between the New Democrats and Wildrose. 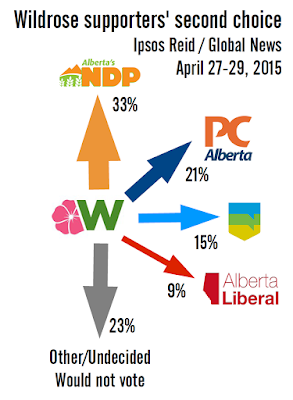 In Ipsos Reid's final poll of the Alberta campaign, one of the questions asked voters what their second choice would be if they were forced to make such a choice.

But the results for Wildrose showed that they were not all, or even mostly, lapsed Tories. The New Democrats were the second choice of 33% of Wildrose voters, compared to just 21% for the PCs. More Wildrosers would vote for the Alberta Party (15%) and the Liberals (9%) than the Tories if forced to make a choice.

Another 16% were undecided and 5% would not vote, while 2% would support another party.

Immediately, we see that Wildrose was not an obstacle to the Tories. In fact, Wildrose potentially drew away more anti-PC voters from the NDP than they did conservative voters from the PCs.

If we distribute Wildrose's vote according to this second choice poll (doing away with the undecideds entirely, and portioning out Wildrosers' Liberal and Alberta Party second choice votes where they did not run a candidate), we get a surprising result. The NDP's majority is not reduced. It is increased. 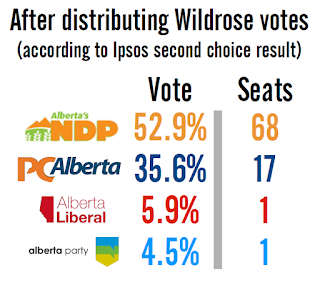 The New Democrats would capture 53% of the vote and 68 seats, with the Progressive Conservatives taking just 36% of the vote and 17 seats. The Liberals, with 6%, and the Alberta Party, with 4.5%, would each retain the one seat they actually did win on May 5.

The New Democrats would dominate Edmonton and the surrounding region, with 64% to the PC's 27%, and all 27 seats.

We could run the numbers different ways, but we always come to the same result: an NDP majority.

If we got rid of the PCs and instead gave those votes to Wildrose (as more PC voters did opt for Wildrose as a second choice), the overall tally would be closer (roughly 48% for the NDP to 36% for Wildrose), but it would still deliver a solid majority government.

Mainstreet Technologies also had a second choice question in its final poll, but it only asked voters whose commitment to their party was weak. It found that 46% of uncommitted Wildrosers would opt for the PCs as their second choice, while only 23% would go for the NDP. The rest were either undecided or would vote for the Liberals.

But since this question was limited to only uncommitted voters, it doesn't get to the root of the issue as the Ipsos poll did. Committed Wildrosers might have been more anti-PC than they were pro-conservative. Ipsos's numbers would certainly seem to suggest that.

Nevertheless, if we distribute Wildrose's vote according to Mainstreet's breakdown, we still get an NDP majority. A narrow one (48% of the vote to 42% for the Tories, and 44 NDP seats to 41 for the PCs), but a majority nevertheless. The NDP did not win because the vote was divided. The PCs simply lost, and no re-jigging of the numbers gives them victory.

Of course, if Wildrose never existed perhaps the dynamics of the campaign would have been completely different. That's the kind of hypothetical that numbers cannot inform us about.

The divided right undoubtedly did help the NDP in certain ridings, and perhaps if Mainstreet's second choice poll was more reflective of reality it made a big difference in the magnitude of the NDP's win. But based on the data at hand, the narrative that the NDP's victory was due to a split on the right does not stand up to serious scrutiny.

I wanted to further clarify something as some readers have misinterpreted this post. They've interpreted it as a sort of hypothetical, what-if scenario that imagines that Wildrose did not exist. I've written about those kinds of things before, so this interpretation is perhaps not a surprise. And my chart showing what would happen if we distributed Wildrose's vote elsewhere might give the impression that this re-distribution is the focus. It was meant, instead, to illustrate why the 'divided-right' argument does not hold-up because the votes to the right of the NDP were not uniform, and in fact a large proportion of those voters preferred the NDP to the re-election of the Progressive Conservatives.

This post is instead about debunking the notion that "Alberta was able to elect a majority NDP government because the conservative vote was split", to quote one of the links in the first paragraph. Or how "if you take [the PC] vote, plus the Wildrose vote, you'd have had a much different result in almost every constituency" and "Wildrose and PCs split the vote in a number of ridings that caused [Rachel Notley] to get a much bigger win than she otherwise would have", to quote two others, is based on a faulty premise. Those votes do not combine so easily.

Moreover, as I lay out in the second part of my post, the conservative vote to the right of the NDP was not something that was split between two parties that, instead, should have been the domain of one. That is because it was not a uniform vote. Many Wildrosers preferred an NDP government to a PC re-election, and many others would rather have voted for more centrist options like the Liberals or the Alberta Party than the PCs, which the people quoted above seem to believe would be their natural home. That simply was not the case. There were enough Wildrosers who preferred the NDP to the PCs to actually boost the NDP's majority, as my second chart spells out. Voters made a choice to defeat the PCs. They were not bamboozled by having their conservative loyalties split in two.

It is entirely about the 2015 campaign and the choice Albertans made. And that choice was not an artificial one because their 'true' conservative nature was split between two options. Wildrose did not split the PCs' vote and doom them to defeat. The PCs simply lost the election because too many Albertans did not want to vote for them, and the NDP won because enough Albertans wanted to vote for them. The split of the actual conservative vote did mean the PCs came out of it worse than they would have otherwise, but they had alienated so many voters that they no longer had a base large enough to re-elect them. The NDP did not win by default.

That some people misinterpreted my argument is, as the writer of this post, in part my fault. The headline might have been more appropriately along the lines of "the split of the right was not behind the NDP's victory," as the current headline sets people up for this misinterpretation. I hope this update clears things up.
Posted by Éric at 11:48:00 AM