The latest polling from the Corporate Research Associates shows that the New Democrats have made impressive gains in Atlantic Canada over the last few months, with big increases in each of the region's four provinces. The gains have come primarily at the expense of the Liberals, but that party is nevertheless on track to win a majority of the region's seats. 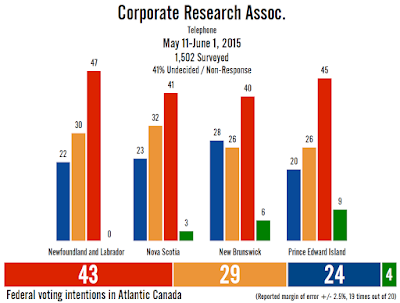 The Liberals led in the region-wide poll with 43% support, a steep drop from the 56% that CRA pegged the Liberals to be at in February.

The New Democrats were up 15 points to 29%, while the Conservatives were down two points to 24%. The Greens were unchanged at 4%.

Undecideds, would-not-votes, and non-responses totaled 41%. While that might seem very high, note that CRA does not ask a follow-up 'leaning' question outside of an election campaign, contrary to what most other pollsters do.

Justin Trudeau scored highest on who would make the best prime minister with 36%, followed by Thomas Mulcair at 22% and Stephen Harper at 19%. After taking out the undecideds, these numbers are virtually identical to party support, and the shift for each of the leaders mirrors that for their respective parties.

What is most interesting about CRA's polling is that it allows us to look at the party standings in each of the region's four provinces.

The results were generally uniform, with the Liberals leading in all four provinces with between 40% and 47%. The NDP placed second in Newfoundland and Labrador, Nova Scotia (where the margin was smallest), and Prince Edward Island. The Conservatives were second only in New Brunswick.

Compared to CRA's last poll, and taking into account the margin of error, the shift in voting intentions was generally uniform throughout the region. New Brunswick bucked the trend, though, with the Liberals sliding only a little and the Conservatives dropping quite a bit more than they did elsewhere in Atlantic Canada.

The Liberals, however, have taken a huge chunk of the vote away from the Conservatives, even in light of this more recent drop. The party is up four points over its 2011 performance in PEI (to 45%), nine point in Newfoundland and Labrador (to 47%), 12 points in Nova Scotia (to 41%), and 17 points in New Brunswick (to 40%).

The shift in voting intentions since February is too large to be a blip (click on CRA's PDF for the comically enormous swing in their tracking chart). And other polls have shown the NDP on the uptick in Atlantic Canada and the Liberals slipping, as shown by the polling averages chart below (before the inclusion of the CRA poll).

That the Conservatives are on track for a drubbing in Atlantic Canada seems clear, as they have been struggling in the region for most of the last four years. They will put up a tough fight in a limited number of ridings, however.

The real question is whether the movement between the Liberals and NDP is part of a trend or just a new reality. Will the NDP continue to climb until the two parties pass each other, or will the Liberals retain their double-digit lead?
Posted by Éric at 2:35:00 PM