How this NDP surge is different from the last one

The Ipsos poll serves as a much-needed confirmation of the EKOS numbers, which had been virtually alone since the Alberta election of May 5.

The projection still lags the polls a little, in part because May has been a quiet month (10 polls had been done in April, while we're up to seven for May). Polls that show a three-way race currently take up 61% of the projection. But the NDP has averaged 29.5% in those polls, whereas they have averaged just around 23% in the remaining polls taking up 39% of the weight.

Nevertheless, the NDP's growth has been remarkable. This is especially so when we consider that the model, at this stage, is designed to react slowly to what could be blips in voting intentions. Since the week ending on May 4, the New Democrats have jumped from 22.9% to 27.1%. Both the Conservatives and the Liberals have dropped 1.3 points over that time.

The New Democrats have picked up 5.5 points over that time in British Columbia, 2.5 points in Alberta, 4.5 points in the Prairies, four points in Ontario, 5.8 points in Quebec, and 0.8 points in Atlantic Canada. Interestingly, though, neither the Conservatives nor the Liberals have been the sole relinquisher of votes. The Liberals have suffered the bulk of the losses in Alberta, the Prairies, Ontario, and Atlantic Canada, but the Conservatives have slid most in British Columbia and Quebec.

A recent piece by the Canadian Press suggested that this latest surge was the first to happen for the NDP since the late 1980s, making it difficult to make comparisons. Of course, as readers of this site know, the NDP has surged much more recently than that. The party was averaging about 35% in May and June 2012, putting it in first place nationwide. So, we do have something to compare the current uptick to. Let's do that. 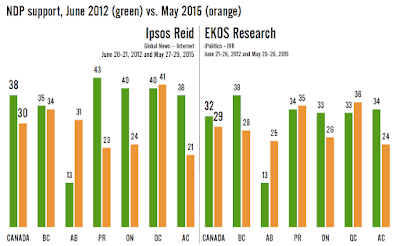 For both Ipsos and EKOS, the NDP was doing better in 2012 than they are now. We should expect their numbers to be better at the regional level as well. But that is not so. The NDP's electorate has shifted since the last time the party was popular.

First, the good news for the NDP. It has made some major gains in Alberta. Both Ipsos and EKOS put the NDP at 13% in the province at a time when the party was doing better nationwide. Now, they have the NDP at 25% to 31%, meaning the New Democrats are roughly doubling their support from 2012. That extra support means a boost of around two points nationwide. Without it, the race would not be as close.

The NDP is doing slightly better in Quebec now than it was in 2012 meaning that, proportionately speaking, its Quebec support is far more significant to the party than it was three years ago.

Two areas have mixed news. According to Ipsos, the NDP is doing about as well in British Columbia as it was doing in 2012, while EKOS has the NDP doing worse. The opposite is the case in the Prairies. These two regions, then, are inconclusive.

But the party is doing significantly worse now in Atlantic Canada than it was doing in 2012. And more importantly, the New Democrats have not made the same inroads into Ontario that they had during Thomas Mulcair's honeymoon period.

This is important, because the gains the New Democrats have made in Alberta will not translate into a lot of new seats. They were much better positioned, with their strong numbers in Ontario, in 2012. The New Democrats have put together a bit of a West + Quebec coalition that aligns with their 2011 breakthrough in Quebec and their traditional strength in B.C. and the Prairies. In 2012, however, they had added Atlantic Canada and Ontario to that coalition.

This is why we're looking at a three-way race instead of a two-headed contest. The Liberals are doing much better in Atlantic Canada and Ontario than they were in 2012, putting them in contention. The Conservatives have their western bases as well as a good chunk of Ontario, giving them the edge in seats. The NDP can now threaten to win a plurality thanks to inroads in B.C., as well as a handful of new seats in the Prairies, in addition to their retention of Quebec.

A swirling mess of a campaign that could produce virtually any result. Will the summer clarify things?
Posted by Éric at 11:03:00 AM