As we are knee-deep into the campaign, I won't do a deep analysis of the federal averages from August. Instead, I'll just post the information here for consistency. 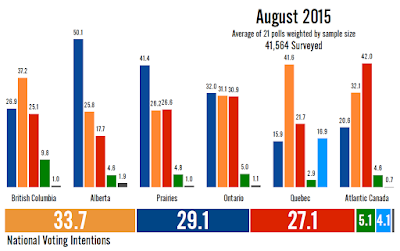 The Greens averaged 5.1%, while the Bloc Québécois was at 4.1%. Another 0.9% said they would vote for another party or independent candidate.

The New Democrats led in British Columbia and Quebec, the Conservatives were ahead in Alberta and the Prairies, and the Liberals were in front in Atlantic Canada. The race in Ontario was about as close as it gets, but the Tories were narrowly in front.

With these levels of support, the New Democrats would have likely won 131 seats, the Conservatives 116, and the Liberals 90. The Greens would have won one seat and the Bloc none.