Throughout the campaign, I will be profiling some of the ridings to watch. Today's selection: the Alberta riding of Edmonton Centre.

Edmonton Centre used to be a perennial tight race, but it joined most other ridings in Alberta as an easy seat for the Conservatives in the 2008 and 2011 elections. This time, it looks like Edmonton Centre could be a close race once again. 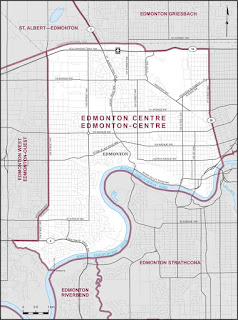 The Liberals were the last non-Conservative party to hold the riding, with Anne McLellan having won it in 2004 by a narrow margin: 42.5% against 41.1% for the Conservatives' Laurie Hawn. The riding then swung over to the Conservatives as the party took power, with Hawn capturing 44.9% of the vote to 38.6% for McLellan.

The riding moved more heavily over to the Conservative camp in 2008, when Jim Wachowich carried the Liberal banner. Hawn took 49% of the vote then, with Wachowich taking just 27.4%. Hawn's margin of victory increased in 2011, but his vote share actually dropped to 48%. It was the NDP's Lewis Cardinal who finished second, with 25.4% against 22.4% for the Liberal candidate. 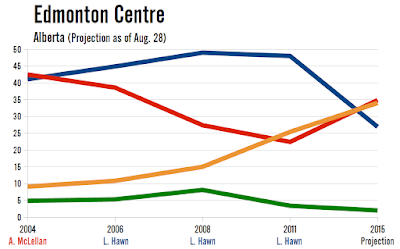 With re-distribution, the riding has lost a slice in the west that Hawn had won comfortably in 2011. That makes holding the riding more difficult for the Conservatives than it otherwise would be, particularly as Hawn is not running for re-election.

McGowan may have a much better chance than this, however. He has some name recognition and the party is doing well in Edmonton as a whole, whereas the Liberals have shown no particular strength in the city in the few regional polls done in the province. The provincial New Democrats won this part of the city handily, so that makes for a lot of voters with recent experience of voting NDP.

So there a few interesting story lines in Edmonton Centre. Is this a seat the NDP can pick up to consolidate the stellar breakthrough of the provincial party in Alberta? Are the Liberals going to win some of the seats they used to win in the West in the past? Will Edmonton Centre be one of those ridings in Alberta in which the split to the left of them works in the Conservatives' favour?

There are a few ridings in Alberta that will be interesting to keep an eye on. Edmonton Centre is definitely one of them.
Posted by Éric at 2:16:00 PM