Throughout the campaign, I will be profiling some of the ridings to watch. Today's selection: the Saskatchewan riding of Saskatoon–University.

It has been awhile since ridings in Saskatchewan were ones to watch, but the new riding boundaries in the province have made it a true battleground. And one of the ridings that looks like it will be hotly contested is Saskatoon–University. 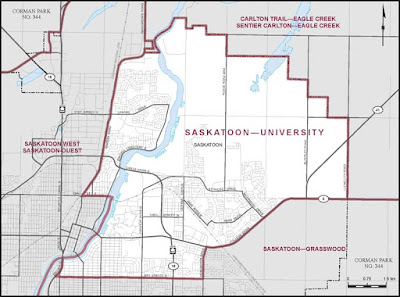 Brad Trost has been a Conservative MP since 2004, when he first won the riding of Saskatoon–Humboldt, the closest thing to Saskatoon–University's predecessor riding. That was a close contest: Trost took 27% of the vote, with the NDP's Nettie Wiebe taking 26%, a few tenths of a percentage point more than the Liberal candidate, while out-going independent MP Jim Pankiw took 20% of the vote.

Re-distribution has had a big impact, however. Trost had won massively in the rural parts of the old riding, though the population in these polls was low. Those areas have been lopped off to form part of the riding of Carlton Trail–Eagle Creek. The area around College Park East in Saskatoon, which Trost won in 2011, is also gone.

However, it isn't all bad news for Trost. A section of the city on the west bank of the Saskatchewan River that voted Conservative has been bolted on to Saskatoon–University. But the bulk of the riding is now urban, and the sections of it that the New Democrats won in 2011 (the section towards the city centre along the river) are still there. Trost did win in the northeastern suburbs of the city, however. So unlike the neighbouring riding of Saskatoon West, this is not one that the NDP would have won with the redistributed boundaries.

Instead, the results in the new boundaries were 48.6% for Trost, with the NDP capturing 38% and the Liberals taking 9.6%.

Trost is up for re-election, and his main opponent is the NDP's Claire Card, a veterinarian and teacher in the city. A better-known face may be that of the Liberal candidate, Cynthia Block. She is a former journalist and broadcaster, having co-anchored the CTV evening news in Saskatoon. The Greens are running lawyer Valerie Harvey. 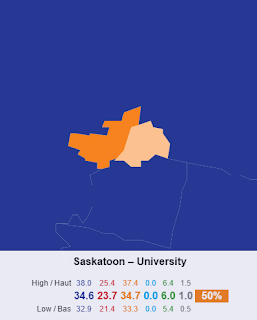 The projection is as close as it gets, but gives the nod narrowly to Card. Taking into account polls in the field to September 9, she is projected to have the support of between 33.3% and 37.4% of voters, with Trost projected to take between 32.9% and 38% of the vote. As you can see in the breakdown (taken from the new interactive riding map here on ThreeHundredEight.com), the model gives it, on average, to Card by 0.1 points.

This will be an interesting riding to watch on election night. It is one that the New Democrats can pick up in Saskatchewan, but is not as much of a slam dunk as Saskatoon West or a likely gain like Regina–Lewvan. The Conservatives have an incumbent in Trost, which is not the case in other ridings in the province. And the Liberals have a candidate with some name recognition.

The question might be whether the Liberals will take as much of the vote as they are projected to take at the moment. If Card is seen as the more likely person to beat Trost, Liberals may flock to her - giving her a more comfortable margin of victory than the regional swings would have predicted.

According to an Environics poll conducted for LeadNow on August 15-16, it appears that this has not happened yet - and that it might not even be necessary for Card to win. The survey, which included 629 decided voters, gave Card the lead with 41%, followed by Trost at 34% and Block at 22%. The margin of error on a sample that size is about four points.

But that was ages ago, now. The campaign has rumbled on for almost another month, and more than a month is still left to go. Things could change drastically nationally, regionally, and in this riding. But I think it will be one to watch on October 19.
Posted by Éric at 2:54:00 PM