Throughout the campaign, I will be profiling some of the ridings to watch. Today's selections: the neighbouring Ontario ridings of Oakville and Oakville North–Burlington.

Oakville and Oakville North–Burlington have followed a parallel history in recent years. Both of these were easy Liberal victories in the three elections held between 1997 and 2004. But in 2006, these two ridings tightened up considerably. The Liberals managed to hold off the Conservatives in Oakville, but were beaten in Halton (the predecessor riding of Oakville North–Burlington) by the Tories' Garth Turner, who would eventually cross the floor to the Liberals anyway. In 2008, Terence Young in Oakville and Lisa Raitt in Halton won by fair margins, and increased them in 2011. 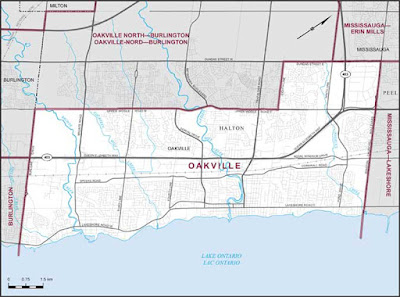 Young won Oakville with 52% of the vote, beating out the Liberals' Max Khan, who took 31%. The New Democrats' James Ede captured 14% of the vote, which was a recent high for them. Young won almost every single poll in the riding, the boundaries of which have not changed for this election. 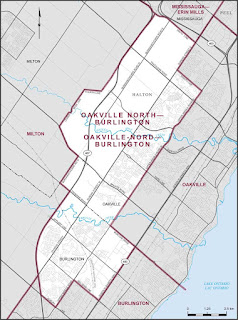 Oakville North–Burlington, however, is an entirely new riding carved out of the southeastern portion of Halton. Raitt won that portion of the riding handily, losing only one poll and taking 54% of the vote, with the Liberals' Connie Laurin-Bowie at 27% and the NDP's Patricia Heroux at 16%.

So the two Oakville ridings showed very similar levels of support in 2011: the Conservatives just over 50%, the Liberals at around 30%, and the New Democrats at around 15%. That would suggest capturing both ridings would be a tall order for the Liberals, and a virtually impossible one for the NDP.

The Conservatives' task has been made a little more difficult as Raitt has opted to run in the new riding of Milton, which comes from the bulk of Halton. In her place, the Tories are running Effie Triantafilopoulos, who has served as Chief of Staff of a few ministers on Parliament Hill, in Oakville North–Burlington. Young, a Conservative backbencher who started his elected political career as a Progressive Conservative MPP from 1995 to 1999, is running again for the party in Oakville.

His main challenger will be the Liberals' John Oliver (no, not that one), a former President and CEO of the Halton Healthcare Service and an assistant deputy minister in the provincial health ministry. In Oakville North–Burlington, the Liberals are running city councilor Pam Damoff.

Running for the New Democrats in that riding is Janice Best, director of the COPE union, while health consultant Che Marville is running for the party in Oakville.

The Greens have not yet named a candidate for Oakville, while Adnan Shahbaz, an instructional coach in the local school board, is running for the party in Oakville North–Burlington.

Along with Burlington, which is a much safer riding for the Conservatives, the projection currently identifies these two ridings as the last Conservative seats separating Liberal-dominated Mississauga from the NDP's fortress in Hamilton.

That is also the case in Oakville North–Burlington, where the NDP's Best is projected to take between 15.4% and 17.3%, while the Greens' Shahbaz would take between 3.3% and 3.9%.

The race is instead between Triantafilopoulos (38.5% to 44.5%) and Damoff (34.9% to 41.5%). The tight race makes these two Oakville ridings two of the closest neighbouring contests in the country.

That is, as long as current trends hold in Ontario. The projection current gives the Liberals 35% and the Tories 34.3% support, with the NDP at 25.5%. When the Liberals were polling more strongly in the province just days ago (they were at 40.6% on Sept. 9), these were two ridings that would be at the top of the list of those liable to swing over to them. But that Liberal mini-surge was made primarily on the backs of the New Democrats, who appear to be recovering somewhat (from a low of 22.3% at the time of that Liberal high). If that continues, ridings like these become much more difficult for the Liberals to win.

This would seem to be the key to these two ridings. When the Liberals used to win these ridings in the late 90s and early 2000s, the New Democrats took under 10% of the vote. But a vote split can't really be blamed for the Conservatives' 2011 victories here, as they captured a majority of the vote in both of these ridings.

Marginal seats like these, if the race continues to be three-headed, could end up deciding who places first, second, and third in the national seat count. Oakville and Oakville North–Burlington are two ridings to keep an eye on.
Posted by Éric at 3:53:00 PM